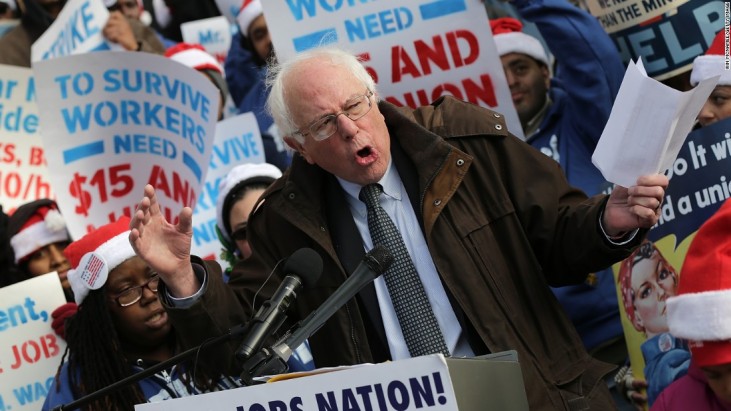 According to Bernie Sanders’ biography on Wikipedia:

Bernard “Bernie” Sanders (born September 8, 1941) is an American politician and the junior United States Senator from Vermont. The longest-serving independent in U.S. Congressional history, Sanders caucuses with the Democratic Party and has been the ranking minority member on the Senate Budget Committee since January 2015. He is a candidate for President of the United States in the 2016 U.S. presidential election.

Sanders was born and raised in the borough of Brooklyn, in New York City. He graduated from the University of Chicago in 1964. While a student, Sanders was a member of the Young People’s Socialist League and an active Civil Rights protest organizer for the Congress of Racial Equality and the Student Nonviolent Coordinating Committee. In 1963, he participated in the March on Washington for Jobs and Freedom. After settling in Vermont in 1968, Sanders ran unsuccessful third-party campaigns for governor and U.S. senator in the early to mid-1970s. As an independent, he was elected mayor of Burlington, Vermont’s most populous city, in 1981. He was reelected three times before being elected to represent Vermont’s at-large congressional district in the United States House of Representatives in 1990. He served as a congressman for 16 years before being elected to the U.S. Senate in 2006. In 2012, he was reelected by a large margin, capturing almost 71% of the popular vote.

A self-described democratic socialist, Sanders favors policies similar to those of social democratic parties in Europe, particularly those instituted by the Nordic countries. Sanders is known as a leading progressive voice on issues such as income inequality, universal healthcare, parental leave, climate change, LGBT rights, and campaign finance reform. He rose to national prominence following his 2010 filibuster against the proposed extension of the Bush tax cuts. He is also outspoken on civil rights and civil liberties, and has been particularly critical of mass surveillance policies such as the USA PATRIOT Act, the NSA surveillance program, and racial discrimination in the criminal justice system. He has long been critical of U.S. foreign policy, and was an early and outspoken opponent of the Iraq War.

Below, you will find Mr. Sanders’ Financial Disclosure Form.