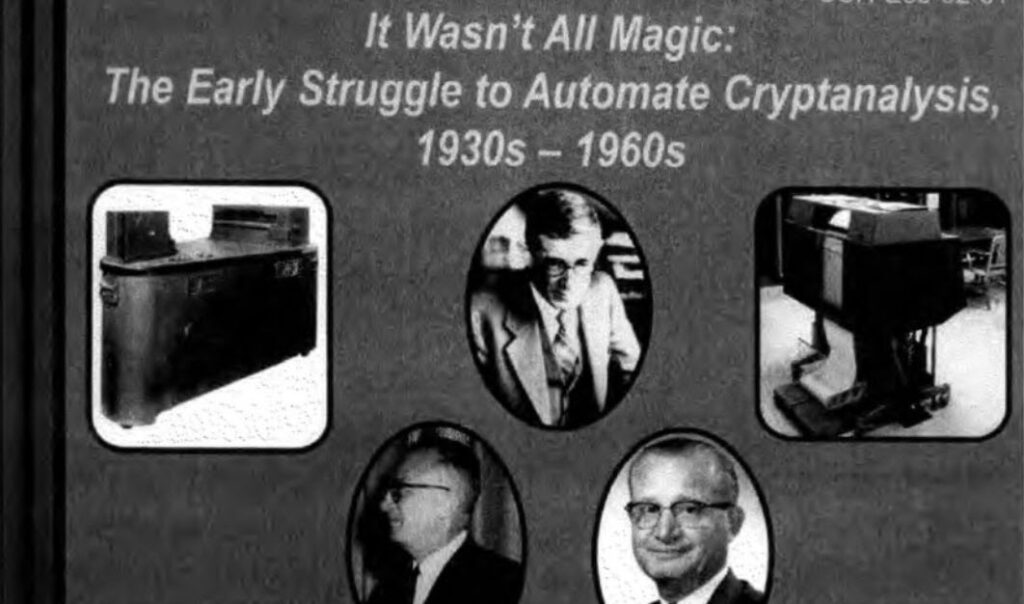 Wasn’t All Magic: The Early Struggle to Automate Cryptanalysis

The National Security Agency has declassified an eye-opening pre-history of computers used for code-breaking between the 1930s and 1960s.  Special thanks and courtesy of GovernmentAttic.org  for allowing The Black Vault to post it here as well.

INTRODUCTION: I am one of those “outsiders” I talk about so much in the later chapters of this book. I was fortunate to be brought into the National Security Agency as one of the Center for Cryptologic History’s first Scholars in Residence. I was borrowed from my university because I had spent a decade working on the history of computers at NSA’s predecessors. I even had the courage to write a book about the subject.

That monograph was on the machines, policies, and relationships that led to the U.S. Navy’s cryptanalytic machine (computer) program in World War II. The book was also about the first major attempts to automate the American library. It had to be about both because the same people built bibliographic and cryptanalytic machines.

My study covered events in the history of the machines through the 1940s, but its focus was on the period between 1930 and 1945. An important conclusion was that the relationship between the efforts of America’s codebreakers and the emergence of the modern digital electronic computer was more complex than had been thought. The navy’s cryptanalysts were in a push-me, pull-me situation. Their work made mechanization a necessity, but the pressures of war and the refusal of the government bureaucracy to sponsor long term research and development programs prevented the navy from becoming the inventor of the modern computer.

During World War II American cryptanalysts built some of the most sophisticated electronic machines in the world, but the need to address cryptanalytic crises blocked them from creating the general-purpose digital electronic computer.

Just as my book was published, I was asked to come to the National Security Agency. One purpose of my year in residence was to see if it was possible to write a complete history of computers at the Agency. The goal was a monograph that covered the entire life of NSA and its predecessors. The thought of finally being able to see the many highly classified documents that had been withheld from me more than balanced the pledge I had to give: I had to promise to refrain from publishing without the approval of NSA’s censors.