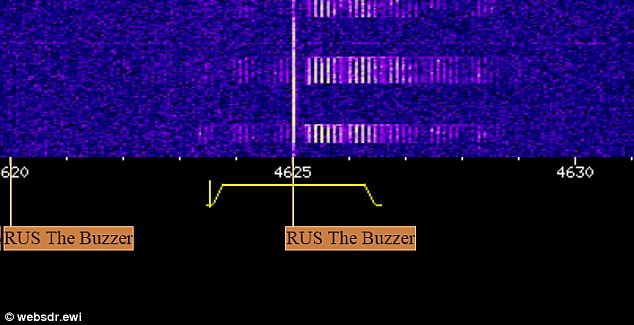 A Russian radio station has played a buzzing sound on frequency 4625 kHz (shown) for four decades. Every few months it is interrupted by a voice relaying a coded message. But no one knows the exact purpose of the station or the message. Some say it is a military station, or a counter-attack measure for nuclear war
Cold War Era

UVB-76, also known as “The Buzzer”, is the nickname given by radio listeners to a shortwave radio station that broadcasts on the frequency 4625 kHz.

It broadcasts a short, monotonous About this sound buzz tone, repeating at a rate of approximately 25 tones per minute, for 24 hours per day.

Here is a sample of the tone:

On very rare occasions, the buzzer signal is interrupted and a voice transmission in Russian takes place. Here is one example, as archived by a researcher who monitors the frequency:

The first reports were made of a station on this frequency in 1982. Its origins have been traced to Russia, and although several theories with varying degrees of plausibility exist, its actual purpose has never been officially confirmed and remains a source of speculation.

The Government Response about UVB-76

The Central Intelligence Agency – “Can Neither Confirm nor Deny”

The Defense Intelligence Agency – “No Records”

The Federal Bureau of Investigation – “No Records”

The National Security Agency – “Can Neither Confirm nor Deny”