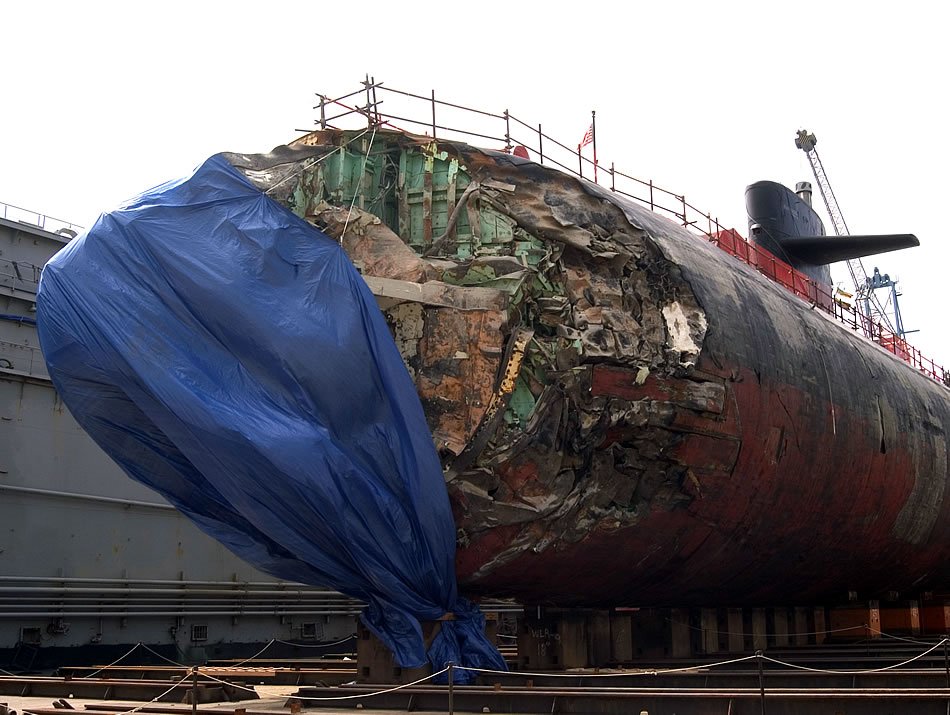 On 8 January 2005 at 02:43 GMT, San Francisco collided with an undersea mountain about 675 kilometers (364 Nautical Miles, 420 statute miles) south-east of Guam while operating at flank (maximum) speed and more than 200 feet (61 m) deep. The collision was so serious that the vessel was almost lost — accounts detail a desperate struggle for positive buoyancy to surface after the forward ballast tanks were ruptured.

Twenty-three crewmen were injured, and Machinist’s Mate Second Class Joseph Allen Ashley, 24, of Akron, Ohio, died on 9 January from head injuries. Other injuries to the crew included broken bones, lacerations, and a back injury. San Francisco’s forward ballast tanks and her sonar dome were severely damaged, but her inner hull was not breached, and there was no damage to her nuclear reactor.

She surfaced and, accompanied by the USCGC Galveston Island (WPB-1349), USNS GYSGT Fred W. Stockham (T-AK-3017), and USNS Kiska (T-AE-35), as well as MH-60S Knighthawks and P-3 Orion maritime patrol aircraft, arrived in Guam on 10 January. The U.S. Navy immediately stated that there was “absolutely no reason to believe that it struck another submarine or vessel.” Later, an examination of the submarine in drydock showed unmistakably that the submarine had indeed struck an undersea mountain which had only vague references on the charts available to San Francisco.  (Source: Wikipedia)

Department of the Army Documents on Incident [7 Pages, 316 kb]- Original request filed to the Defense Intelligence Agency (DIA) back in 2005. These documents took 6 years to get.  Other documents are being processed.