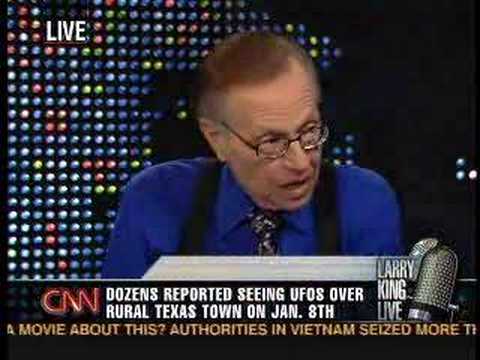 On January 8, 2008, Stephenville gained national media attention when dozens and later hundreds of residents reported observations of unidentified flying objects. According to reports, residents observed several types of UFOs, the descriptions ranging from triangular looking craft to discs. Several residents described the crafts as the size of a football field, while others said they were nearly a mile long. Some observers reported military aircraft pursuing the objects.

CNN’s Larry King covered the story in the days following the incident, and according to Steve Allen, a private pilot who witnessed the UFO, the object was travelling at a high rate of speed which supposedly reached 3,000 feet in the air. Allen said it was “About a half a mile wide and about a mile long. It was humongous, whatever it was.” The History Channel show, UFO Hunters did an investigation on the UFO sightings.

On January 23, after initially denying that aircraft were operating in the area for operations security purposes, the US Air Force said they were conducting training flights in the Stephenville area that involved 10 fighter jets. The Air Force said they were merely F-16 Fighting Falcon jets conducting night flights. Disgruntled employee, Angelia Joiner, who during this period was the Stephenville Empire-Tribune reporter covering the story, left the paper because they ceased covering the topic Washington Post blogger Emil Steiner reported that her termination may have been related to pressure from the Stephenville town fathers.  MUFON has released reports about the UFO incident here. The report alleged that a UFO had flown over the Bush’s Crawford Ranch. The other MUFON report is a radar related report on this matter. Inquiries made about the UFO incident have been stonewalled by the USAF.

On 2/27/2009, I submitted a FOIA request relating to the Stephenville UFO event.

The request was worded, “Recently, the magazine Skeptical Inquirer published an article about the Stephenville Lights that were seen on January 08, 2008.  It stated,
Astronomer (and retired Air Force pilot) James McGaha (see the accompanying ?The Trained Observer? piece) investigated.

On January 17, he contacted the Federal Aviation Admin­istration and asked if any aircraft that night had entered the Brownwood Military Operating Areas (MOAs). These MOAs begin ten miles southwest of Stephenville?a 3,200-square-mile area used for military aviation training. The FAA informed McGaha on January 18 that a group of four F-16s from the 457th Fighter Squadron entered the operating area at 6:17 pm local time. A second group of four F-16s entered the same area at 6:26 pm. They departed at 6:54 and 6:58, respectively. The time the aircraft were flying in the MOA accords with the time of the sightings.

I respectfully request a copy of all documents that authenticates this statement.  Please also include any documents pertaining to Mr. McGaha’s communications, if any exist, with the FAA.

Additionally, I respectfully request all documents relating to the aircraft that entered this airspace, their mission, etc. Please include all letters, memos, emails, recordings, reports, etc., that  pertain to my request.”

The following is a list of the contents that was received on the CD-ROM disk. I recommend reading the Readme.doc file listed on the top of the index for an explanation on what the .txt files are.  Please note, most of the .txt files over approximately 4-6mb in size.