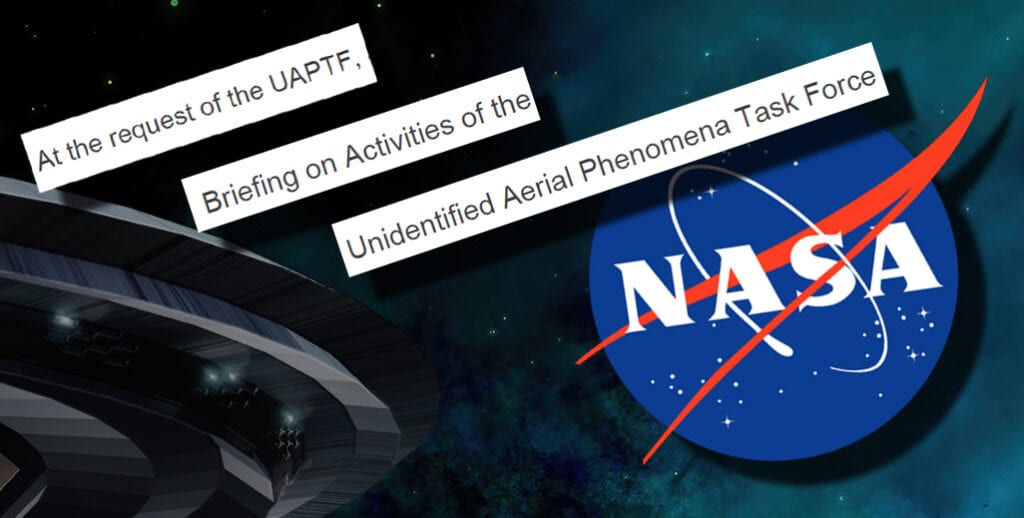 UAP Task Force Initiated Contact with NASA To Brief Them on UFOs; But They Won’t Say Why

On August 4, 2020, the Department of Defense (DoD) announced the establishment of the UAP Task Force (UAPTF). Its mission, according to the press release, was to “improve its understanding of, and gain insight into, the nature and origins of [Unidentified Aerial Phenomena] UAPs. The mission of the task force is to detect, analyze and catalog UAPs that could potentially pose a threat to U.S. national security.” The DoD noted that incursions within “training ranges or designated airspace” would be the primary focus, and since its creation, they have conducted classified briefings on the topic for The White House, the House Permanent Select Committee on Intelligence, Subcommittee on Counterterrorism, Counterintelligence, and Counterproliferation, and others.

Now, a new document sheds light on what else they were doing behind the scenes. In a Freedom of Information Act (FOIA) request filed by The Black Vault, it was revealed by the response that in the first month after the establishment of the UAPTF, they initiated contact with NASA and requested that the task force brief NASA on UAPs in a secure setting.

But the exact reason WHY, remains unknown.

“During the course of its work, the UAPTF has reached out to organizations across DoD, the Intelligence Community, and the U.S. government,” Pentagon spokesperson Susan Gough said in an e-mailed statement to The Black Vault. “For security reasons, we will not detail the contributions of specific organizations to the UAPTF’s work, nor the areas discussed with every organization as part of the UAPTF’s investigations.”

Gough, who has largely been the voice for most UAP related comments given on behalf of the U.S. government, issued this statement to The Black Vault after coordinating with NASA to formulate the response. Her word speaks on behalf of both agencies regarding the matter.

This newly found discovery comes from documents obtained via a FOIA case (21-HQ-F-00507) asking for e-mails sent to or from NASA Science Associate Administrator Dr. Thomas Zurbuchen, which contain keyword phrases such as “Unidentified Aerial” or “unidentified flying” etc. It was motivated by a June 2, 2021, press conference wherein NASA Administrator Bill Nelson and Zurbuchen spoke about the phenomena.

The case yielded a small stack of records, but one gave an important revelation not yet known to the general public.

On September 13, 2020, then Acting Associate Administrator for the Office of International and Interagency Relations, Mike Gold, sent a “Weekly Update” e-mail to a list of recipients, which included Zurbuchen, then NASA Administrator Jim Bridenstine, and many others. Within the update, Gold talks about a briefing he would be attending “at the request of the UAPTF.” 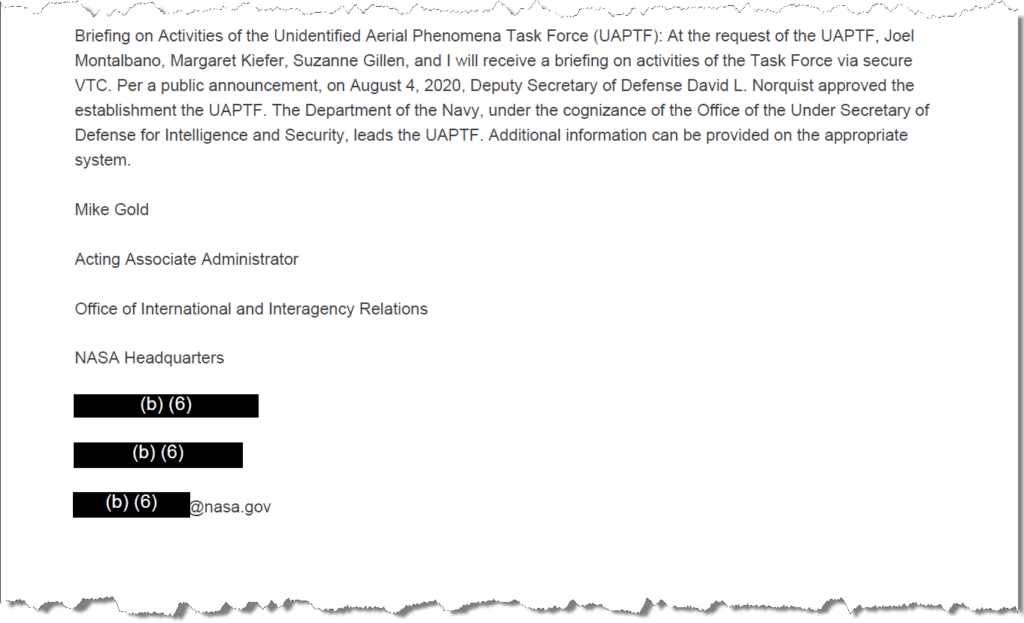 The document names all those who would be attending the briefing via a “secure” video teleconference. That included International Space Station (ISS) Program Manager Joel Montalbano; Director of the Export Control and Interagency Liaison Division Margaret Kieffer; Former Associate Administrator for Legislative Affairs Suzanne Gillen; and Gold.

The request to brief NASA comes as bit of a surprise, since in the recent “UAP Report,” officially titled as “Preliminary Assessment: Unidentified Aerial Phenomena,” NASA was not mentioned in the list of government agencies that were coordinated with, though according to the U.S. government, that list was not entirely complete when it comes to entire scope of work done by the UAPTF outside of the report.

“The list of organizations included in the UAP Report to Congress were the ones who provided specific input in the preparation of the report,” Gough told The Black Vault. “It was not a comprehensive list of all the organizations which the UAPTF has contacted in the course of its work.”

Perhaps one of the most intriguing aspects to this new revelation, is the inclusion of Montalbano. Montalbano currently serves as the Program Manager for the International Space Station (ISS).

The ISS does have multiple systems to help monitor Earth, which may be a reason why the UAPTF wanted to coordinate and share data. NASA calls it a “global observation and diagnosis station” that “promotes international Earth observations aimed at understanding and resolving the environmental issues of our home planet.”

It is possible the UAPTF wanted to gain access to the data collected by these onboard systems in order to see what could be gained from it while investigating UAP cases closer to the surface of Earth.

Although they would not confirm this was the reason, the Pentagon did reinforce the possibility. “It is worth noting… the National Aeronautics and Space Administration is an organization with broad scientific responsibilities, including atmospheric research, etc.” Gough’s statement continued. “Such information is vital to fully understanding the environment in which Navy aviators operate and the conditions that may have been present during any particular observation.”

This scenario is also bantered about in other e-mails released to The Black Vault via the same FOIA case. Just a couple months after the briefing of NASA was scheduled to take place, the Senior Advisor to the Administrator, Randy Cruz, wrote an e-mail on January 4, 2021, talking about the “media discussion” taking place about UFOs. Cruz stated to Sandra Connelly, Deputy Associate Administrator (DAA) for NASA’s Science Mission Directorate (SMD), and Karen Feldstein, Associate Administrator for International and Interagency Relations, that he felt NASA may be approached to help validate and utilize “our technologies/capabilities to monitor and/or analyze some of these [UFO] claims.” 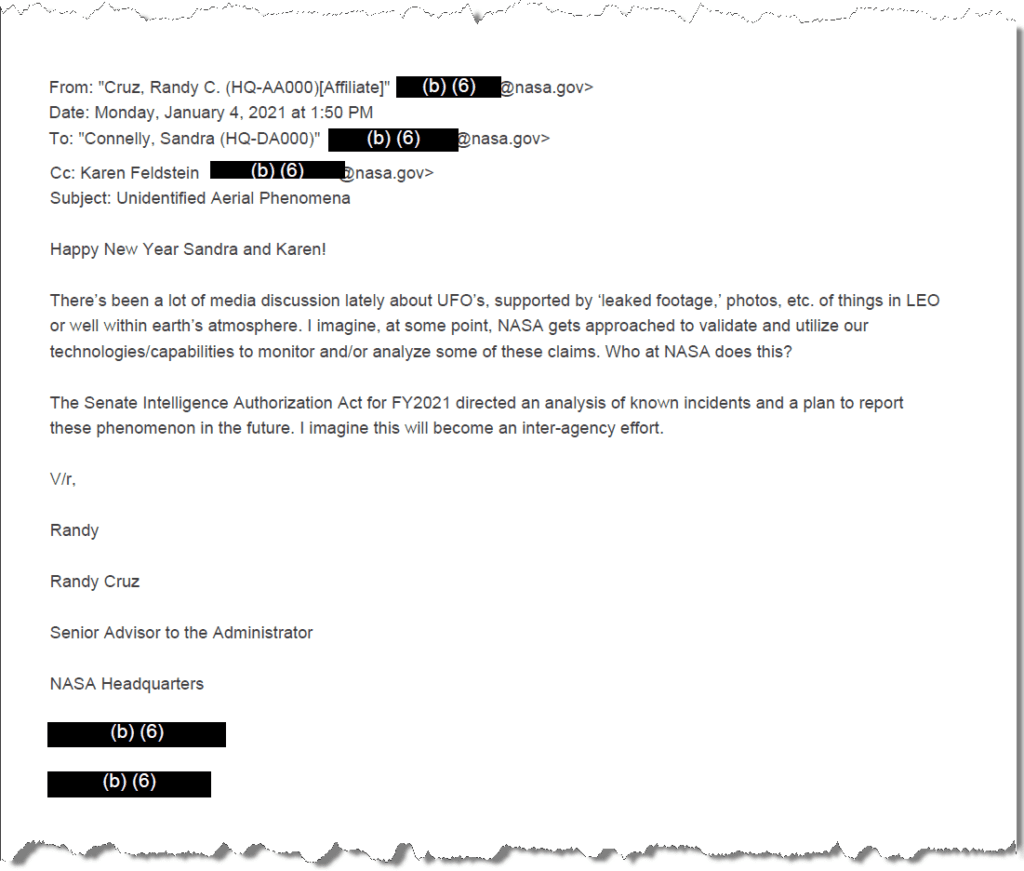 Of course, it is also possible the UAPTF’s inclusion of NASA could also tie into numerous UFO sightings captured by ISS cameras. In 2020, Russian cosmonaut, Ivan Vagner, posted a video he took of mysterious objects captured during a time lapse on board the ISS. In 2014, the Houston Chronicle reported an unknown object seen buzzing the ISS and broadcast by NASA’s live feed cameras. And in 2013, a user on Military.com only identified as “Member 26835147,” posted a video of numerous UFOs captured by ISS cameras. There are numerous cases that can be referenced, and some may even have reasonable explanations, but the UAPTF may be interested in them all in order to find cases of interest.

We may never know the scope of the classified briefing for NASA on UAPs. But since then, NASA has certainly started talking about UFOs and UAPs openly. On the same day that the Office of the Director of National Intelligence (ODNI) published their public version of the UAP “Preliminary Assessment,” NASA launched an online “Frequently Asked Questions” (FAQ) section of their website all about UAPs and UFOs.

Although primarily about the search of alien life in the Cosmos, the FAQ section touches upon the more nuts and bolts aspect of the phenomena that seems to plague Earth and defy explanation.

“Through our Earth-observing satellites, NASA collects extensive data about Earth’s atmosphere, often in collaboration with the other space agencies of the world. While these data are not specifically collected to identify UAPs or alien technosignatures, they are publicly available and anyone may use them to search the atmosphere,” one answer read. “While NASA doesn’t actively search for UAPs, if we learn of UAPs, it would open up the door to new science questions to explore. Atmospheric scientists, aerospace experts, and other scientists could all contribute to understanding the nature of the phenomenon. Exploring the unknown in space is at the heart of who we are.”