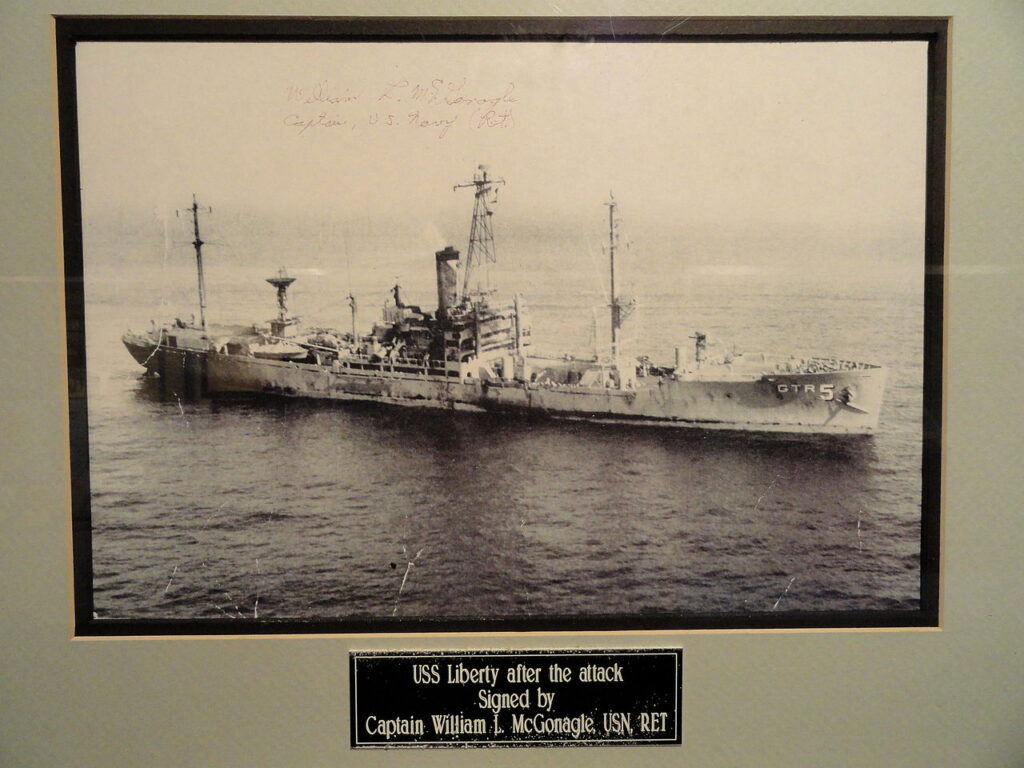 The USS Liberty incident was an attack on a United States Navy technical research ship, USS Liberty, by Israeli Air Force jet fighter aircraft and Israeli Navy motor torpedo boats, on June 8, 1967, during the Six-Day War. The combined air and sea attack killed 34 crew members (naval officers, seamen, two Marines, and one civilian), wounded 171 crew members, and severely damaged the ship. At the time, the ship was in international waters north of the Sinai Peninsula, about 25.5 nmi (29.3 mi; 47.2 km) northwest from the Egyptian city of Arish.

Israel apologized for the attack, saying that the USS Liberty had been attacked in error after being mistaken for an Egyptian ship. Both the Israeli and U.S. governments conducted inquiries and issued reports that concluded the attack was a mistake due to Israeli confusion about the ship’s identity, though others, including survivors of the attack, have rejected these conclusions and maintain that the attack was deliberate.

On 02 July 2003, the National Security Agency (NSA) released additional information relative to the 08 June 1967 attack on the U.S.S. Liberty. This release includes three audio recordings, transcripts (in English), three follow-up reports, and a U.S. Cryptologic History Report entitled “Attack on a SIGINT Collector, the U.S.S. Liberty.” The recordings are in Hebrew and contain time counts in English that were added by the intercept operator. The follow-up reports are summaries of the three transcripts with non-substantive chatter omitted and a compiled report that summarizes the activity and contains the text of the transcripts. The U.S. Cryptologic History Report is a less redacted version of the same document originally released in 1999.

How the information was obtained:

Within an hour of learning that the Liberty had been torpedoed the Director, NSA, LTG Marshall S. Carter, USA, sent a message to all intercept sites requesting a special search of all communications that might reflect the attack or reaction. No communications were available. However, one of the airborne platforms, a U.S. Navy EC-121, had collected voice conversations between two Israeli helicopter pilots and the control tower at Hazor Airfield following the attack on the Liberty.

A Review of the Technical Research Ship Program 1961-1969 (2017 Release) [137 Pages, 25.5MB] – In September of 2016, I requested a Mandatory Declassification Review of this document. Although previously released, it had a lot of redactions. In February of 2017, the NSA released this version of the document, after another review was conducted. (It appears I was not the only one who requested an MDR of the record — not sure who the other requester(s) were.

Office of the Secretary of Defense Collection

Formal Investigation into the Circumstances Surrounding the Attack of the USS Stark in 1987 [46 Pages, 1.6mb]

USS Liberty Incident Chronology of Significant Events relating to the Employment of US Forces in Lebanon [4 Pages, 0.4mb]