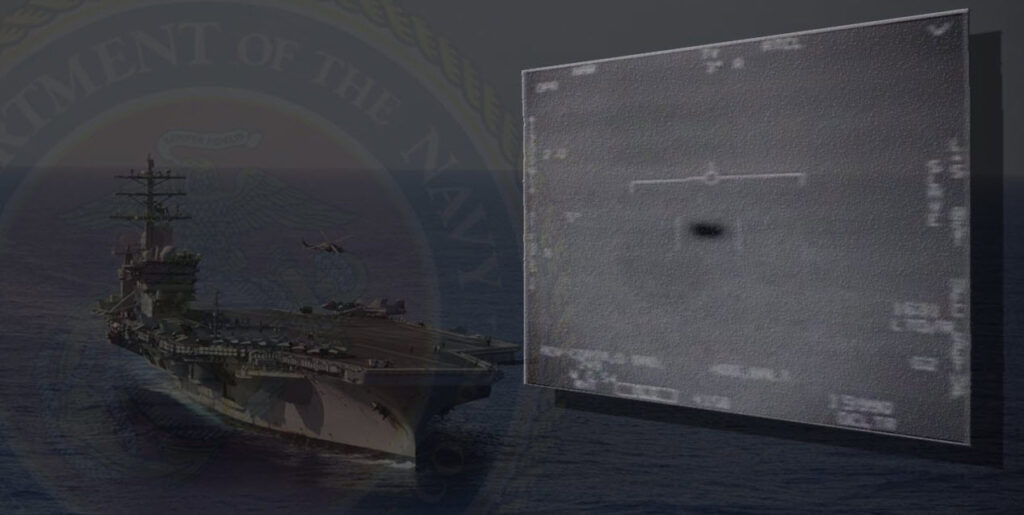 On December 16, 2017, the New York Times and To the Stars Academy of Arts & Science (TTSA) published two videos which both organizations claimed showed “Unidentified Aerial Phenomena” or UAPs. Although reported at the time as being recently “declassified” by the U.S. government (a claim currently disputed by both the Pentagon and the U.S. Navy); revelations in the weeks that followed proved that one of the two videos known as “FLIR1” had already been leaked onto the internet in 2007, about a decade prior to the news.

The “FLIR1” footage is of an unidentified flying object (UFO) seen in 2004 by pilots flying with the Nimitz Carrier Strike Group during training missions off the coast of San Diego. However, the video was never meant to be seen by the public, and that was a concern to the Navy.

In recent statements given to The Black Vault, the Navy admits they were not only aware of the leak as early as 2009 but also investigated how the footage ended up on the internet. “With respect to the 2004 sighting by aircraft from the aircraft carrier USS Nimitz (CVN 68); that video was widely shared throughout the ship at that time. In 2007, one of those crewmembers posted the video onto the public web,” said Joseph Gradisher, official spokesperson for the Deputy Chief of Naval Operations for Information Warfare. “In 2009, the online post of the video came to the attention of Navy officials,” he continued.

The first known appearance of the “FLIR1” video was posted on the popular “alternative topic” message forum AboveTopSecret on February 4, 2007. A file named ‘f4.mpg’ was linked within a larger post on the site, which then led to a German production company’s website known as “Vision Unlimited” for the download. Although the digital video has long been removed from the active site online today, it can still be found on the “Wayback Machine,” a project by “Internet Archive” which aims to archive snapshots of the internet at random intervals.

It is unclear exactly how “Vision Unlimited” came to house the file, even to “Vision Unlimited” itself. In a late December 2017 interview with Grenzwissenschaft-Aktuell.de (GreWi), Mr. Philip Schneider, manager of “Vision Unlimited,” stated, “We don’t know where the file came from and can only say that it hasn’t been on the server for a long time since,” said Schneider. “Because the case is so strange, we also wanted to investigate. But quickly this showed to be fruitless because the file was on an old server and all data (LOGs etc.) are no longer available. I’ve also talked to former employees who had access to the server, but no one could tell me anything about it.”

Although no further information is available on how the “FLIR1” video wound up on a German server under a different filename, the Navy was made aware of the situation. Gradisher told The Black Vault, “…in consultation with Navy law enforcement personnel, [the Navy]decided not to pursue the matter. Given the time since recording (approximately 5 years), the widespread distribution of the recording within the ship at the time of recording, and the size of the crew at the time (approximately 5,000), it was determined that there was no way to accurately determine who might have released the video.”

Although no action was taken on the original 2007 leak, the Navy and the Pentagon have both issued statements to The Black Vault asserting that not only the “FLIR1,” but also other UAP related videos known as the “Gimbal” and “GoFast” were not cleared for public release. This means that all three videos, which the Navy does officially acknowledge depict UAPs, are all considered “leaks” and not official releases.

When asked specifically about the 2017 and 2018 leaks of the “Gimbal” and “GoFast” videos, Gradisher stated, “With respect to the other 2 videos cited, the Navy has no information on how they were released into general circulation.”

However, that information has seemingly been widely reported. TTSA has long made the claim through multiple interviews and written statements that TTSA board member Mr. Luis Elizondo spearheaded the movement to get the videos reviewed by the appropriate Department of Defense (DOD) components. In addition, releases directly to The Black Vault under the Freedom of Information Act (FOIA) from the DOD further prove Elizondo filed the official paperwork, and communicated directly with the Defense Office of Prepublication and Security Review (DOPSR), the agency that manages all DOD related security reviews of information.

TTSA has never publicly disputed any of the hundreds of news stories which stated, or alluded to, Elizondo having brought forward the videos into general circulation.

When this information was brought up to the Navy, and the question was posed again on whether they would investigate the “Gimbal” and “GoFast” leaks; the Navy was clear that no more information would be released on the matter. Gradisher stated simply, “The Navy will not comment on claims/comments from any outside parties with respect to the videos you’ve mentioned.”