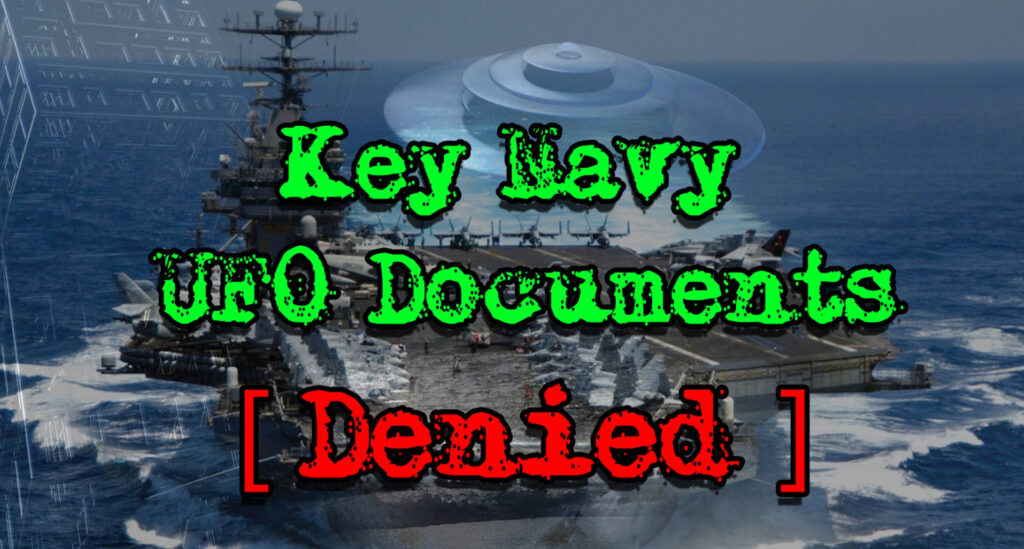 The United States Navy has just denied access to multiple UFO related documents requested via the Freedom of Information Act (FOIA). After months of processing, the Navy responded to three requests submitted by The Black Vault and stated that an untold number of records dealing with Unidentified Aerial Phenomena (UAP) were classified and could not be released to the general public. One of the records denied is a little-known “background paper” which could very well be the key to deciphering the “phenomena” and how it relates to the Navy.

The three requests by The Black Vault were submitted in April and July of 2019, each requesting information that dealt with different aspects of the Navy’s connection with UAPs.

The first request was motivated by news that “UFO Guidelines” were being drafted by the Navy for pilots and other personnel to report their encounters with UFOs. The news, first reported by Politico on April 23, 2019, stated that the guidelines were only in “draft” form. Classified or not, in the eyes of the law, that fact would likely exempt them from public release (FOIA Exemption [b][5]) simply because the record was not finalized and existed only in “draft” form.

However, just three days after Politico broke the story, the Navy issued revised statements to The Black Vault, wherein they indicated that the “message to the fleet” regarding UAPs was no longer a “draft.” The Navy’s public affairs office turned down The Black Vault’s request for the message itself, which is believed to outline the precise steps for pilots reporting UAP sightings. However, a FOIA request was filed the same day to access the document, in hopes that process would yield a positive result.

That attempt was unsuccessful. The denial came in a letter dated January 28, 2020, which said, “[U.S. Navy Chief of Information] CHINFO has determined that records responsive to your request are exempt from disclosure pursuant to 5 U. S. C. § 552(b) (1) as the information is currently and [properly]classified in accordance with Executive Order 13526, Section 1.4(a) as the information pertains to information involving military plans, weapons systems, or operations.”

A second request, filed April 29, 2019, also stemmed from the revised official statement by the Navy to The Black Vault. “Navy officials have provided a series of briefings by senior Naval Intelligence officials as well as aviators who reported hazards to aviation safety,” said Joseph Gradisher, official spokesperson for the Deputy Chief of Naval Operations for Information Warfare. This paved the way for a request to be filed for “all briefing material, which would include but not be limited to, all written material, reports, documents, handouts, minutes, briefing documents, list(s) of attendees of the briefing(s), etc.”

That request was also denied, as the Navy cited that all responsive material, was classified. The language outlining the reason for classification was verbatim of the above.

The Key to The Navy UAP Mystery

Though the “UFO Guidelines” and the Senate UAP briefings were widely reported by the mainstream media; The Black Vault’s third request was for a record not as well known. In a June 2019 FOIA release of internal e-mails pertaining to UAPs, The Black Vault discovered that there was a “background paper” on the phenomena currently being utilized by the Navy and was stored on a Top Secret server known as JWICS.

“Below is our response to the follow‐up questions from the Washington Post,” acting Assistant Deputy Chief of Naval Operations (DCNO) for Information Warfare B. Lynn Wright said in an internal e-mail. “We will send to Jason on JWICS the background paper for your information.” Per the e-mail chain, one of the recipients was Vice Admiral DeWolfe Miller, who responded to the message stating that he would meet with Wright in order to read and discuss the paper. The “Jason” referenced, is likely the former Director, Special Programs, Office of the Chief of Naval Operations, Jason A. Reynolds, who also appeared multiple times in the e-mail chain.

It was this “background paper” that The Black Vault requested on July 9, 2019, that also received a denial for the same reasons as outlined above.

The “background paper” is referenced after a long statement circulated internally by John “Jay” Stratton, an Office of Naval Intelligence (ONI) Senior Analyst from the Nimitz Operational Intelligence Center.  That statement, one that stayed internal and never released to the public for months until The Black Vault’s FOIA request brought it into the open, was trimmed down and those truncated statements were the ones issued to the public.

The classified “background paper” referenced in the e-mail is likely the lone source of all information utilized by Stratton and other Navy spokespeople to craft official responses sent to The Black Vault, Politico and numerous other media outlets asking about UAPs.

This “background paper,” which remains classified, could be the key to unraveling the mystery behind UAPs and how it all connects with the Navy.

“While working on the paper last fall, I’d come across the Linda Howe video in which she cited Eric Davis saying that the report he and Hal Puthoff were provided to study, as BAASS subcontractors, was derived from an original classified report written by a GS-15 working for ONI,” Lambright told The Black Vault. “Then I came across the Paco Chierici interview in which he stated he had been given an exhaustive classified ONI report for two weeks prior to writing his 2015 article. That made two independent sources claiming to have seen evidence that ONI had some very significant documentation worth trying to get. So, I wrote to ONI.”

In a letter dated December 9, 2019, Lambright was told that there were “Top Secret” briefing slides on the 2004 UFO encounter off the coast of San Diego and that they were denying the release of, because if they did, “[it]would cause exceptionally grave damage to the National Security of the United States.” They also stated they found a “Secret” video which may still be in the process of review for public release. That request is pending.

The secrecy behind it all does not surprise Lambright. “As we all know, there could be a number of understandable reasons for denying the records, although the exemptions they cited do raise questions of their own. But to deny everything with no attempt to reasonably segregate any of it certainly suggest that the entire subject being discussed or investigated is as sensitive in its own right as any of the details.” He also added that, “Perhaps even knowing who was being shown the ‘briefing slides’ might expose how serious the subject was or reveal to our enemies how totally defenseless the Navy is. Whatever the case, the narrow scope of my request specifically for information on the Nimitz UFO/UAP incidents on those days in 2004 certainly suggests that whatever ONI is withholding relates directly to whatever [David] Fravor, [Kevin] Day, and the others encountered.”

Although these denials to access UAP information may be understandable but frustrating for some; one person has a surprisingly positive outlook on the situation. Luis Elizondo, who told The Black Vault he was the “senior ranking person” on a UFO research program known as the Advanced Aerospace Threat Identification Program (AATIP), offers some words of encouragement.

“In my humble opinion, [the Navy]should be commended for their courage and proactive stance,” Elizondo told The Black Vault. “I believe they have done much over the last 2 years regarding this highly contentious topic. Admitting that UAPs are indeed real; allowing the pilots to speak publicly without retribution or consequence; admitting the fact that the videos are real videos of unidentified phenomena; and establishing new policy guidance, to name a few. However, let’s not forget that the Navy ultimately still works for the Pentagon, and sadly there are some there who still resist this effort.  As such, the Navy has to remain mindful of the same counter-forces that my colleagues and I faced when we were with AATIP.”

The “counter-forces” Elizondo refers to is the pushback and flip-flopping by the Pentagon about the UAP topic, and about his background. Elizondo has not wavered about his claims, and he has told The Black Vault in the past that he believes the Pentagon will “reassess” the erroneous information they have circulated and will “…finally provide the truth to the public, once and for all.”  Elizondo believes that this “mess,” as he calls it, may play a role in how the Navy is currently handling FOIA requesters like The Black Vault and Lambright.

“From a practical perspective, the Navy may be a bit gun shy and doesn’t want to break ranks with the Pentagon.  Perhaps after seeing what the Pentagon tried to do to me, they realize that leaning too far forward could get them in political hot water.”

Regardless of what the true reason for the secrecy is, Elizondo offered one closing piece of advice to The Black Vault, along with posing one of his own unanswered questions that he would like the Pentagon to address:

“Our National Security apparatus is designed to detect, identify, and deter threats… and yet here we have something that we can only sometimes detect, barely identify, and have yet no clue how to deter it.  Not a good spot to be in if you are the Navy or the Pentagon,” said Elizondo.  “My recommendation is to keep asking the Pentagon the hard questions and why they continue to change their position. As for my question… where the heck is the Air Force in all this?”