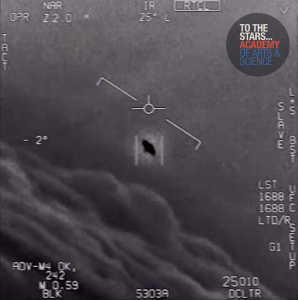 Screen shot from the “Gimbal” video, as published by To The Stars Academy of Arts & Science (TTSA).

In a series of statements obtained exclusively by The Black Vault, the U.S. Navy confirms three UFO related videos represent what they call “unidentified aerial phenomena” or UAPs.  Originally released by the New York Times and To The Stars Academy of Arts & Science (TTSA) beginning in December of 2017, the three videos are commonly referred to as the “FLIR1,” “Gimbal” and “GoFast” (the third being released in March 2018). According to TTSA’s website, the clips represent, “… the first official evidence released by the US government that can be rightfully designated as credible, authentic confirmation that unidentified aerial phenomena (UAP) are real.”  The Navy’s official position now confirms TTSA’s claims, at least, in part.

“The Navy designates the objects contained in these videos as unidentified aerial phenomena,” said Joseph Gradisher, official spokesperson for the Deputy Chief of Naval Operations for Information Warfare. When asked why the phrase “UAP” is now utilized by the U.S. Navy, and not “UFO,” Mr. Gradisher added, “The ‘Unidentified Aerial Phenomena’ terminology is used because it provides the basic descriptor for the sightings/observations of unauthorized/unidentified aircraft/objects that have been observed entering/operating in the airspace of various military-controlled training ranges.”

However, the Navy also asserts that the three videos were never cleared for public release, thus confirming the official stance of the Pentagon originally issued to The Black Vault in May of 2019, and contradicting TTSA’s widespread claims the U.S. government “declassified” the footage for public consumption.

“The videos were never officially released to the general public by the DoD and should still be withheld,” said Pentagon Spokesperson Susan Gough to The Black Vault earlier this year. Mr. Gradisher, on behalf of the Navy, confirms the Pentagon’s position this week by adding, “The Navy has not released the videos to the general public.” 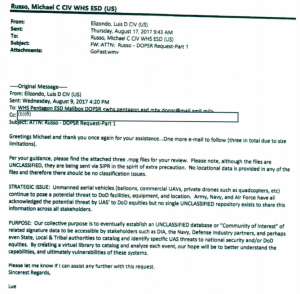 Released e-mail via the Freedom of Information Act (FOIA) written by Mr. Luis Elizondo. Within it, Mr. Elizondo justifies his request for the three videos being used for U.S. government use only.

The Navy’s new statements also contradict information contained in a string of e-mails recently released by the Office of the Secretary of Defense (OSD) through the Freedom of Information Act (FOIA). The FOIA release to The Black Vault yielded sixteen pages of e-mails between Mr. Luis Elizondo, the man who sits as a board member of TTSA and claims to have headed the Pentagon’s secret UFO study known as “AATIP,” and the Defense Office of Prepublication and Security Review (DOPSR), a component of the OSD that manages security reviews of information both “public and controlled release.”

In one of the released e-mails, Mr. Elizondo stated his justification for the clearance to use the three videos for U.S. government use only: “Unmanned aerial vehicles (balloons, commercial UAVs, private drones such as quadcopters, etc) continue to pose a potential threat to DoD facilities, equipment, and location. Army, Navy, and Air Force have all acknowledged the potential threat by UAS’ to DoD equities but no single UNCLASSIFIED repository exists to share this Information across all stakeholders.” Mr. Elizondo continued, “Our collective purpose is to eventually establish an UNCLASSIFIED database or ‘Community of Interest’ of related signature data to be accessible by stakeholders such as DIA, the Navy, Defense Industry partners, and perhaps even State, Local & Tribal authorities to catalog and identify specific UAS threats to national security and/or DoD equities.”

No e-mail released by OSD, which contained the entire conversion between Mr. Elizondo and DOPSR, mentioned UFOs, UAPs or anything “unidentified.”

In addition to these e-mailed communications released, there was a DD Form 1910. This document is used to officially request a DOPSR review of information, and here, Mr. Elizondo described the videos also as “UAV [unmanned aerial vehicle], Balloons, and other UAS [unmanned aerial system].”

Again, no reference to UFOs, UAPs or anything “unidentified.”

When asked for clarification from the Navy on why the discrepancy exists, Mr. Gradisher stated, “The Navy has no comment on, nor control over, how civilian individuals or organizations may or may not describe the objects in the referenced videos. The Navy designates the objects contained in these videos as unidentified aerial phenomena.” He then added, “You’d have to contact Mr. Elizondo on his descriptions.  I can’t comment or speculate on how/why he referred to them in that way.”

Mr. Elizondo and To The Stars Academy of Arts & Science (TTSA) were contacted for comment, but neither party has responded. 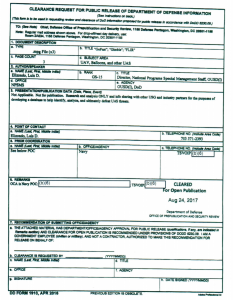 The DD Form 1910, as released by the Office of the Secretary of Defense (OSD) via the Freedom of Information Act (FOIA). This form indicates that the only approval given by DOPSR was for U.S. government use only, and “industry partners.” (Note: Statements by the Pentagon to The Black Vault show that To The Stars Academy of Arts & Science (TTSA) nor the NY Times are considered “industry partners.”)

The e-mails show that although Mr. Elizondo was ultimately granted “[U.S. Government] Use Only” for the videos to be used in a database about aerial threats from unmanned systems such as drones; it was the Navy that needed to correspond with DOPSR and offer their official sign-off for full, unrestricted, public release. That communication required from the Navy was absent from the FOIA release, so the Navy was contacted for comment.

“Neither the cognizant Navy offices nor DOPSR have record of any correspondence responding to a request for unrestricted release of the subject videos in 2017,” said Mr. Gradisher, thus confirming that no evidence exists that authorized a public release for the three videos in question.

Multiple statements and written records now show that the approval required for “public release” never took place, and the claims by TTSA that the videos represent, “official evidence released by the US government,” remain unfounded.

This new information comes amidst a flurry of other official comments complicating the claims of TTSA. In May of this year, The Black Vault began receiving the first statements from the Pentagon indicating the “FLIR1,” “Gimbal” and “GoFast” videos were not cleared for public release, despite the claims of TTSA.  In June, Keith Kloor with The Intercept received a statement from the Pentagon that Mr. Luis Elizondo had “no responsibilities” within the AATIP program, despite the widespread published claims by TTSA that he headed it. A 2009 letter by Senator Harry Reid was quickly touted by some to claim Mr. Elizondo’s story was in fact true; however the Pentagon quickly countered with official statements issued to The Black Vault stating that the letter’s existence did not change their stance.

To date, these official statements and comments by the Pentagon and the Navy have not been addressed or refuted by TTSA, despite them being contacted numerous times for comment.