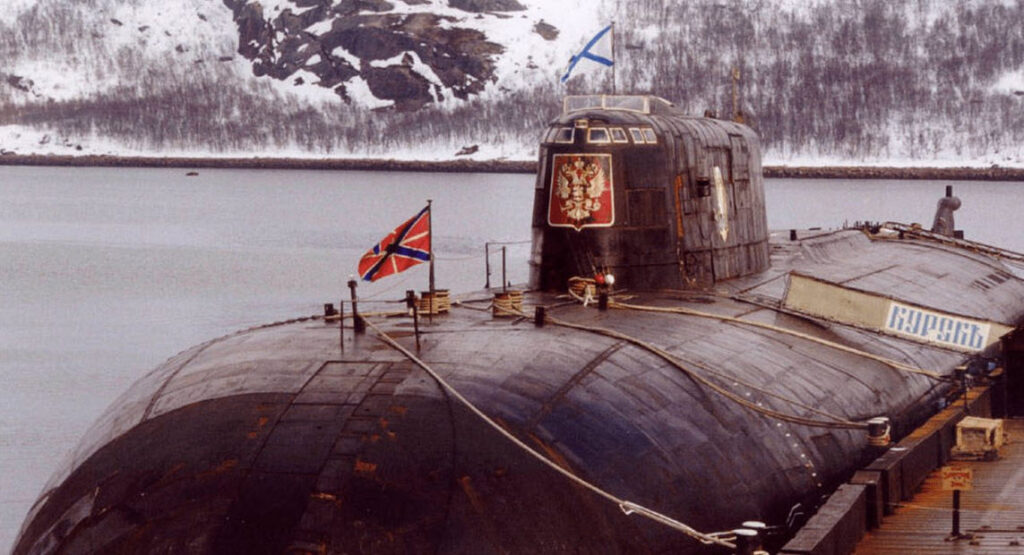 Here is, according to Wikipedia, what is believed to have happened to the Kursk:

The Kursk submarine disaster occurred during a major Russian naval exercise in the Barents Sea on Saturday, 12 August 2000. The Kursk, an Oscar-class submarine (Russian: Project 949A Антей), was preparing to load a dummy 65-76 “Kit” torpedo when a fire, followed by a large explosion, caused the ship to sink. Nearby ships registered the explosion but did not know what to make of it. A second, much larger, explosion took place two minutes and 15 seconds later, and was powerful enough to register on seismographs as far away as Alaska.

The Russian Navy did not recognise that the vessel had sunk for more than six hours and because the emergency rescue buoy had been intentionally disabled, it took more than 16 hours for them to locate the sunken ship. Over four days they used four different diving bells and submersibles to try to attach to the escape hatch without success. The navy’s response was criticized as slow and inept. The government initially misled the public and media about the timing of the accident, stating that communication had been established and that a rescue effort was under way, and refused help from other governments. The Russian Navy offered a variety of reasons for the sub’s sinking, including blaming the accident on a collision with a NATO vessel. On the fifth day, the Russians accepted British and Norwegian offers of assistance. Seven days after the submarine went down, Norwegian divers finally opened a hatch to the rescue tube in the ship’s ninth compartment, hoping to locate survivors, but found it flooded.

An official investigation after most of the wreck was raised along with analysis of pieces of debris concluded that a faulty weld in the casing of the practice torpedo caused high-test peroxide (HTP) to leak, which caused the kerosene fuel to explode. The initial explosion destroyed the torpedo room, severely damaged the control room, incapacitated or killed the control room crew, and caused the submarine to sink. The fire resulting from this explosion in turn triggered the detonation of between five and seven torpedo warheads after the submarine had struck bottom. This second explosion was equivalent to between 2 to 3 tonnes (2.0 to 3.0 long tons; 2.2 to 3.3 short tons) of TNT. It collapsed the first three compartments and all the decks, and destroyed compartments four and five, killing everyone forward of the nuclear reactor compartment. An alternative explanation offered by critics suggested that the crew was not familiar with nor trained on firing HTP torpedoes and had unknowingly followed preparation and firing instructions intended for a very different type of torpedo. Combined with poor oversight and incomplete inspections, the sailors initiated a set of events that led to the explosion.

It was later determined that 23 sailors in the sixth through ninth compartments survived the two explosions and took refuge in the ninth compartment. They survived more than six hours before an oxygen cartridge contacted the oily sea water, triggering an explosion and flash fire that consumed the remaining oxygen. All 118 sailors and officers—111 crew members, five officers from 7th SSGN Division Headquarters, and two design engineers—aboard the Kursk died. The following year, a Dutch team was contracted by the Russians to raise the hull. Employing newly developed lifting technologies, they recovered all but the bow of the vessel, including the remains of 115 sailors, who were buried in Russia.

Despite the public story, it is not fully known what truly happened to the Kursk.  Many theorize that it could have been brought down by a collision with an American ship in the area, but of course, evidence to prove it is hard to come by.

Below, you will find the records uncovered via the Freedom of Information Act (FOIA).

CIA Declassified KURSK Documents, Released February 2022 [15 Pages, 1.1MB] – In 2019, The Black Vault filed a Mandatory Declassification Review (MDR) case to get the above June 2016 released documents reviewed. Although some redactions were lifted – it is clear many secrets remain about the sinking of the Kursk.

Department of the Navy

Department of the Navy Declassified Maritime Reports [16 Pages, 0.8MB] – This, according to the NAVY, is all the material they currently have about the sinking of the Kursk.  These records were declassified in January of 2015.

NSA MDR Denial, April 2019 [3 Pages, 0.8MB] – In October of 2014, I requested records from the NSA regarding the Kursk. They were fully denied and exempt from release. In November of 2018, I requested a Mandatory Declassification Review (MDR) on the records found, but were fully exempt. In April of 2019, they denied the MDR, and said the documents remained TOP SECRET and SECRET.