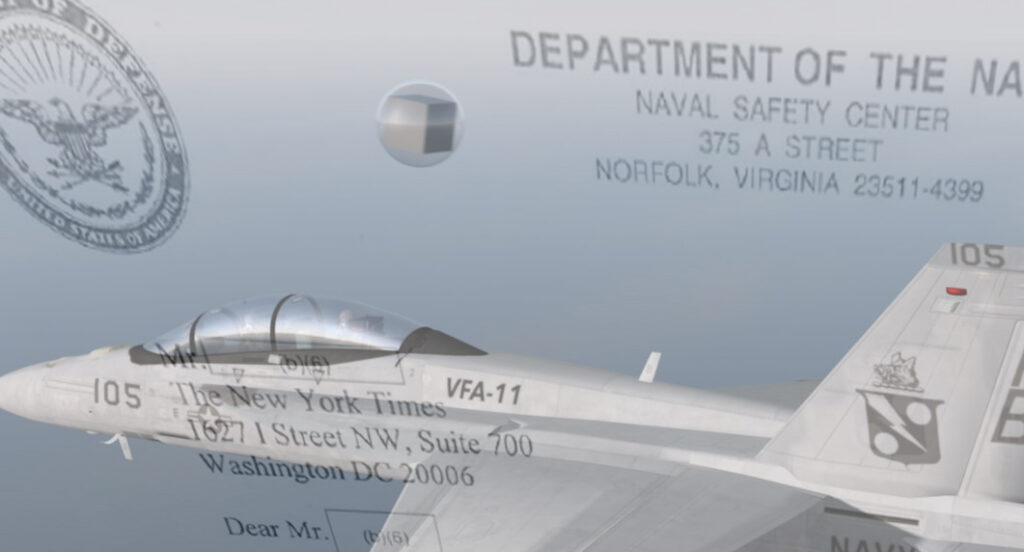 The NY Times and the Unreported UAP Encounters

On May 12, 2020, Tyler Rogoway and Joseph Trevithick, investigative journalists with The Drive’s Warzone, reported on eight encounters by the U.S. Navy with Unidentified Aerial Phenomena (UAP). “Seven of them involve F/A-18E/F Super Hornets and occurred at various times between 2013 and 2014 in a patch of airspace off the coast of Virginia and North Carolina known as the W-72 warning area,” The Drive reported. “The eighth [incident]  took place in 2019 and involved an EA-18G Growler flying in a different portion of the Atlantic Ocean off the coast of Maryland called the W-386 warning area.” However, a recent Freedom of Information Act (FOIA) request by The Black Vault uncovered that these documents first reported on by The Drive were sent to the NY Times nearly a full year prior to Rogoway and Trevithick breaking the story. Although that may simply be a case of the NY Times not understanding what they had; not caring what they had; or they were scooped by another media outlet — the FOIA documents also revealed something else.

We know the NY Times printed their “‘Wow, What Is That?’ Navy Pilots Report Unexplained Flying Objects” story on May 26, 2019. What the FOIA documents just released to The Black Vault show is that the NY Times was seeking supporting evidence to the claims published in that article as early as April 18, 2019, more than a month prior to the original publication date. Specifically, they sought, “All Aircraft Mishap Investigation Reports and deck logs from the USS Theodore Roosevelt (CVN·71) from January 2015 – March 2015.” In other words, the NY Times sought supporting evidence to back up the claims made by Lt. Ryan Graves and Lt. Danny Accoin about their 2014/2015 encounters with UAPs as chronicled within that article.

During the course of the 2019 FOIA case, the NY Times changed their original request from “January 2015 – March 2015” to “November 2014 – February 2015.” The reason for the amendment in unclear, but the change still should have yielded responsive records based on the statements given by Lt. Graves and Lt. Accoin to the NY Times.

The NY Times would later write in their article that an “aviation flight safety report was filed” in late 2014 in regards to one of the UAP encounters, so this may explain why the NY Times later amended their request to include the “late 2014” timeframe. Once their amendment was made twelve days prior to their publication date, The NY Times decided not to wait for the potential supporting evidence to verify the statements of their witnesses. Rather, they moved forward with the article despite having multiple conversations with the Navy that the FOIA process was progressing, and they published on May 26, 2019. The NY Times article also publicized the upcoming “Unidentified: Inside America’s U.F.O. Investigation” television series on History, which would premier later that week, which also profiled Lt. Graves.

Four days after the article was published, and two days prior to Lt. Graves appearing on History channel, the NY Times learned about the lack of evidence to support their witnesses. The Navy claimed to have no official documentation nor could they find the “aviation flight safety report” referenced in their article. This fact was relayed to the NY Times in a telephone conversation on May 30, 2019, and in writing via a letter from the Naval Safety Center dated May 29, 2019 (though likely dated in error, and meant to read May 30, 2019.).

The NY Times seemingly ignored this fact as they later referenced these encounters again in an April 28, 2020, story, though they never make reference to the Navy’s final FOIA response to them; the lack of documented official evidence; or any additional information they had received in regards to what they reported on. There is also no indication they asked for official comment from the Department of Defense or the Navy in relation to the claims made by Lt. Graves and Lt. Accoin, at least, it was never stated in their original article that they tried to do so.

To the credit of The Drive, they picked up on this, and reported the discrepancy in their article, stating, “What is also puzzlingly absent from this group of documents are any reports that occurred in the late-2014 to mid-2015 timeframe.”

Just two days after The Drive highlighted these newly revealed UAP encounters, along with the lack of evidence to support the 2014/2015 claims put forth by the NY Times, a new article appeared. The NY Times published their “Navy Reports Describe Encounters With Unexplained Flying Objects” on May 14, 2020, and again highlighted the testimony of Lt. Graves. However, this time, something changed with the NY Times’ reporting: the timeframe of his event.

“One of the former F/A-18 Super Hornet pilots, Lt. Ryan Graves, last year described a close encounter off Virginia Beach with what looked like a flying sphere encasing a cube,” the NY times reported. “The incident was documented in a report with few details on June 27, 2013, which stated that the Navy jet crew saw something pass about 200 feet away on the right side.”

The problem was the date and timeframe change, as it was previously reported as “late 2014.” This means the NY Times is connecting Lt. Graves’ case to documentation that was created about a year and a half earlier than the NY Times originally reported the event actually occurring. The NY Times does not make reference to this discrepancy nor do they issue a correction to their original reporting. The time frame simply changes from one article to another.

Why did the NY Times not report or follow up on the additional information they obtained? The FOIA case by the NY Times ultimately showed that 1) there was no supporting evidence to the claims they put forth as the testimony was wrong or 2) that there was no supporting evidence to the claims because their reporting was wrong. Either way, the documents received by the NY Times proved one of these two explanations applied, and a correction or additional reporting was necessary. Yet the NY Times did not report any of it until nearly a full year later, but not until another media outlet pointed out vital information was missing from the original claims.

Unofficially, one of the authors of the NY Times article, Leslie Kean, did address the discrepancy found buried within her personal Facebook page. When asked about the date change on May 15, 2020, Kean writes, “As we understand it, the safety officers would sometimes tone down the reports to make them less mysterious. Graves confirmed that this was his incident, and that the dates had been fuzzy for him since this was years ago. Yes he estimated 2014 in the previous story, but he said it could have been 2013.”

It should be noted, the assertion of the Navy altering reports to “tone down” the incidents, along with the original reporting using “fuzzy” recollection has never been published by the NY Times.

This comment by Kean on her personal page also notes that Lt. Graves’ said it “could have been 2013” in relation to his UAP encounter with a “sphere encasing a cube.” However, the NY Times did not make reference to the possibility it “could have been 2013,” but rather, they stated it as a fact despite the stark difference in detail between the testimony of Lt. Graves and the report itself allegedly documenting the same, along with the difference in date from their original reporting.

The Black Vault has long spoken out about the accuracy of the mainstream media when reporting on UFOs. And, with the journalistic standard claimed by the NY Times for all issues, it appears on now numerous occasions, that standard has not been adhered to when they report on the UFO / UAP issue. And as The Black Vault strongly has asserted countless times over — the topic, and the issues that go along with them — deserve respect, accuracy and fair reporting.