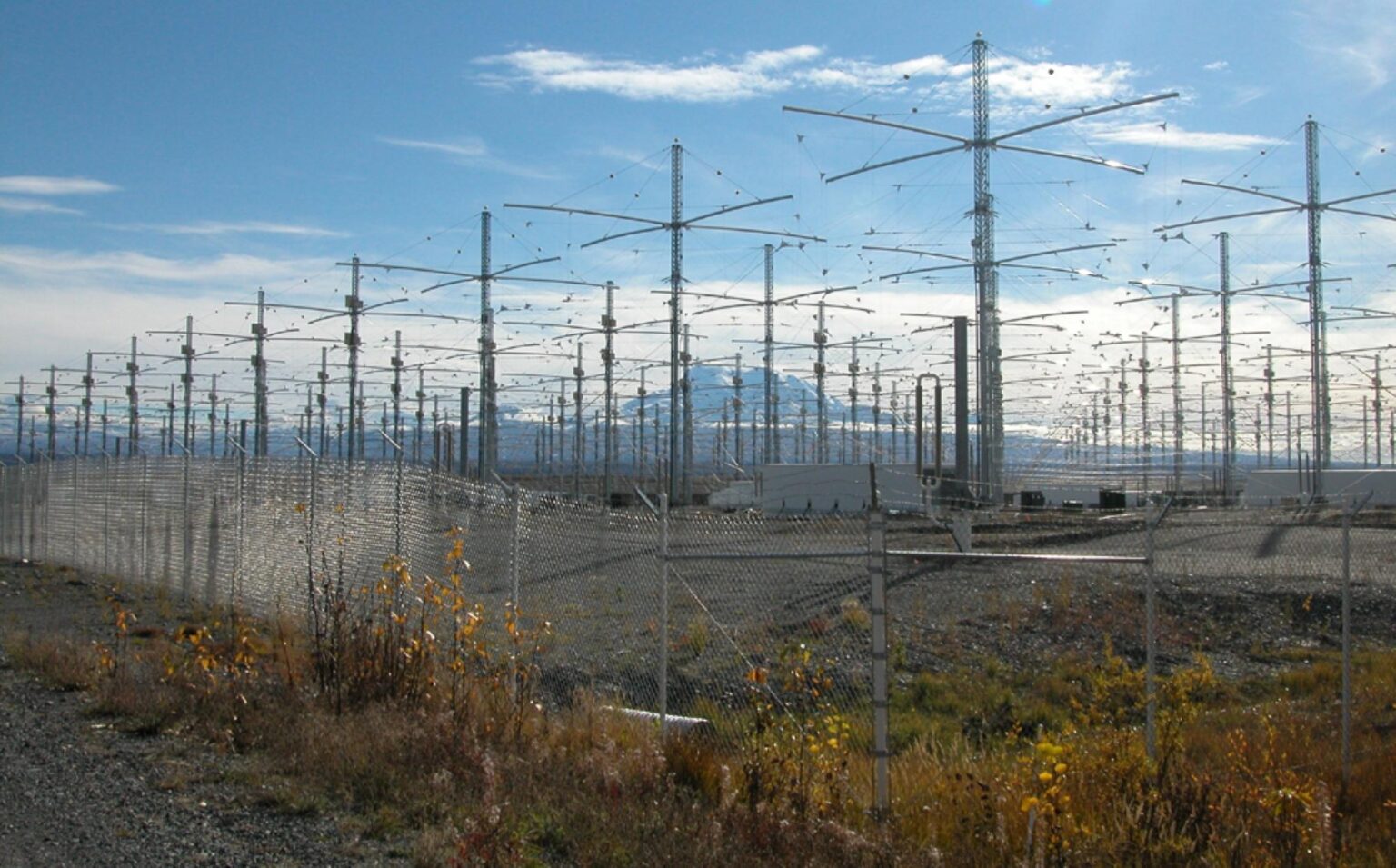 The High Frequency Active Auroral Research Program (HAARP) is an ionospheric research program jointly funded by the U.S. Air Force, the U.S. Navy, the University of Alaska, and the Defense Advanced Research Projects Agency (DARPA). Designed and built by BAE Advanced Technologies (BAEAT), its purpose is to analyze the ionosphere and investigate the potential for developing ionospheric enhancement technology for radio communications and surveillance. The HAARP program operates a major sub-arctic facility, named the HAARP Research Station, on an Air Force–owned site near Gakona, Alaska.

HAARP has been the topic of conspiracy theories for quite some time, which range from HAARP being capable of modifying weather, disabling satellites and exerting mind control over people, and that it was being used as a weapon against terrorists. Such theories blamed the program for causing earthquakes, droughts, storms and floods, diseases such as Gulf War Syndrome and Chronic Fatigue Syndrome, the 1996 crash of TWA Flight 800, and the 2003 destruction of the space shuttle Columbia.

Below are documents obtained about HAARP, and are archived here for research and are listed in chronological order of report date.

Environmental Impact Statement. Volume 1. Proposed High Frequency Active Auroral Research Program, July 1993 [ 450 Pages, 21MB ] – The FEIS describes the potential environmental impacts of constructing and operating a proposed ionospheric research facility in interior Alaska. The system is referred to as HAARP(High-frequency Active Auroral Research Program), and would be used primarily for conducting pioneering studies of ionospheric properties. This proposed facility would be the most technologically advanced in the world. The program could lead to a better understanding of the ionosphere and enable researchers to develop methods for enhanced communications for both civilian and defense applications. The HAARP system consists of a powerful high frequency radio transmitter, referred to as the ionospheric research instrument, and a number of scientific data gathering (diagnostic) instruments. This document addresses three alternatives associated with the construction of the HAARP facility; namely construction at either Clear or Gakona, and the no action alternative. Issues and resources that were examined for both of the sites include land and minerals, vegetation and wetlands, mammals, birds, aquatics, hydrology and water quality, air quality, socioeconomics, cultural resources, subsistence, recreation, aesthetics, possible bioeffects of radio frequency radiation, electromagnetic environment and radio frequency interference, atmosphere, threatened and endangered species, hazardous materials and wastes, and irretrievable commitment of resources.

HAARP, Research and Applications, 1990 [ 19 Pages, 1.25MB ] – This report describes and documents the scientific uses and the wide range of applications created by the HF Active Auroral Research Program (HAARP). The report is based on the deliberations of a scientific committee sponsored by the Air Force Research Laboratory and the Office of Naval Research and convened by the East-West Space Science Center of the University of Maryland. The HAARP represents a technological advancement with capabilities that allow for new and unique dual-use research and application opportunities. Use of the ionosphere as an active, nonlinear medium allows the primary HF energy to be transformed in a controlled fashion into coherent radiation from 0.001 Hz to 40 kHz and into incoherent IR and visible wavelengths. This function, supplemented with the generation of FAS and with the use of the transmitter as a radar, makes the HAARP transmitter a unique source for remote sensing and communication uses.

Electromagnetic Interference Impact of the Proposed Emitters for the High Frequency Active Auroral Research Program (HAARP) 14 May 1993 [ 134 Pages, 4.9MB ] – The proposed HAARP emitters at the Gakona (Alaska) preferred site and at the Clear AFS (Alaska) alternative site are the Ionospheric Research Instrument (IRI), the Incoherent Scatter Radar (ISR), and the Vertical Incidence Sounder(VIS). The electromagnetic interference (EMI) impact of those emitters on receiving systems in the vicinity of the sites is estimated in this study. The results are intended for use as an input to the Air Force Environmental Impact Statement as part of the Environmental Impact Analysis Process.

An Electromagnetic Interference Study of Potential Transmitter Sites for the HF Active Auroral Research Program (HAARP), 19 July 1993 [ 40 Pages, 1.81MB ] – This report presents the results of Electromagnetic Interference (EMI) measurements conducted by the Naval Research Laboratory in June of 1991. This study examined a number of potential sites for the location of the proposed High Frequency Active Auroral Research Program (HAARP) transmitter facility. The proposed HAARP facility will consist of a large planar array of antennas excited by phased high power transmitters operating in the lower portion of the HF band (2.8 to 8 MHz). Several candidate locations were identified for study in the vicinity of Fairbanks, Alaska. The magnitude of EMI in the population centers and on other commercial and public facilities in the vicinity of Fairbanks from the high power transmitter is a major factor in the site selection process for HAARP. The EMI investigations were conducted in two phases. For Phase I of the study, EMI measurements were conducted at two receiver locations using an airborne transmitter at thirteen potential HAARP sites. The results from the Phase I measurements were examined and the two most promising candidate transmitter locations were selected for more comprehensive measurements during Phase II. For Phase II, comprehensive EMI measurements were made for each of the two candidate transmitter sites. Field strengths were measured at a variety of receiver locations that are representative of the impact area for the EMI from HAARP. The results for both the Phase I and Phase II measurements are presented in this report.

High Frequency Active Auroral Research Program (HAARP) Imager, 30 September 1993 [ 322 Pages, 10.2MB ] – A low-light-level monochromatic imaging system was designed and fabricated which was optimized to detect and record optical emissions associated with high-power rf heating of the ionosphere. The instrument is capable of detecting very low intensities, of the order of 1 Rayleigh, from typical ionospheric atomic and molecular emissions. This is achieved through co-adding of ON images during heater pulses and subtraction of OFF (background) images between pulses. Images can be displayed and analyzed in real time and stored in optical disc for later analysis. Full image processing software is provided which was customized for this application and uses menu or mouse user interaction.

HAARP High Power Experiments and Observations of Ionospheric Interactions, 1996 [ 5 Pages, 0.2MB ] – We review experiments in ionospheric modification and long distance propagation performed at the HAARP facility. Most experiments were in bistatic configuration with the WAVES receiver on the NASA/WIND satellite. Initial experiments showed scintillation-like variations in low frequency propagation through the earth’s ionosphere. A HAARP-HIPAS transmission experiment set up a spatial interference pattern measured at WIND. The Kodiak SuperDARN radar scanned the modified region above HAARP and observed the growth of ionospheric irregularities. Recently, lunar echoes at 8 MHz were detected by WIND. The experiments at HAARP will extend to nonlinear regimes as power levels increase.

Imaging of Underground Structure Using HAARP, February 1999 [ 48 Pages, 3.3MB ] – Non-invasive imaging of underground structure is important for the detection of hidden tunnels and other hazards, as well as resource exploration, mineral exploration, and environmental contamination problems. We processed and analyzed electromagnetic imaging data sets provided by the Air Force Research Laboratory (AFRL). The main parts of this study included: 1) subsurface imaging using smooth minimum-structure algorithms, 2) adaptation of imaging algorithms for parametric inversions, 3) analysis of the sensitivity and resolution of data to subsurface features and sharp boundaries, and 4) modification of robust processing algorithms for AMT data. Our analysis using synthetic data for simple models indicates the subsurface tunnels can be successfully detected if they are at a depth to diameter ratio of approximately 3:1 or less. Detection of tunnels in actual field conditions is more difficult because of the low signal levels in the AMT frequency range and geologic noise. This was evident in all data sets analyzed under this contract. The HAARP transmitter has the potential to be a valuable exploration tool in that it could generate EM fields that appeared locally as plane waves and could overcome the problems with low AMT signal levels and geologic noise. Our modifications to robust processing algorithms for AMT data and for controlled source data have proven useful for analyzing data with low signal levels and large amounts of noise.

Geophysical Electromagnetic Sounding Using HAARP, March 2002 [ 14 Pages, 1MB ] – The electrical resistivity of the ground can be measured by several methods. One, which has proven useful, is the controlled source magnetotelluric method (CSAMT). Current over a wide range of frequencies is introduced into the earth through a grounded dipole. Then the resulting electric and magnetic fields are measured at a distance greater than several skin depths. The apparent resistivity is then calculated by: p = 1/5f E/B(exp 2) The apparent resistivity vs. frequency can be converted into true resistivity vs. depth, This grant involved an investigation into the HAARP virtual antenna pattern out to 200 km, and its use as a CSAMT transmitter.

High Frequency Radar Astronomy With HAARP, 2003 [ 7 Pages, 0.4MB ] – At high frequency, radio waves will interact with space plasmas and surfaces of local astronomical objects, producing an echo that can provide new diagnostic data. The availability of high power radars operating at high frequencies opens a window for the remote investigation of our surrounding space environment. We discuss and illustrate this technique with some specific examples.

Investigation of Plasma Phenomena in the Ionosphere Under Natural Conditions and Under Conditions Artificially Perturbed by HAARP, 17 August 2005 [ 81 Pages, 50.2MB ] – Under this contract, Northwest Research Associates (NWRA) is performing measurements of the ionosphere in order to investigate plasma phenomena in both the natural ionosphere and in the ionosphere perturbed by the High-frequency Active Auroral Research Program (HAARP) high-frequency heater. The research being conducted falls within Hanscom Technical Areas 3(a), “Ionospheric Effects Research and Department of Defense Systems,” and 3(b), “Ionospheric Research Technology,” of the Broad Agency Announcement VS-O3-Ol released by the Air Force Research Laboratory (AFRL). As a contribution to Technical Area 3(b), we are collaborating with scientists and engineers from AFRL, the Naval Research Laboratory (NRL), and other research organizations in the application of diagnostic instrumentation to HAARP. Among the HAARP instruments that we are applying to ionospheric research are three NWRA ITS1OS coherent radio receiving systems for measuring relative Total Electron Content (TEC) and recording scintillation, and an Ashtech Model Z-FX UPS receiver for measuring absolute TEC. We are posting TEC from these instruments, and phase-scintillation records from the ITS10S receivers, on the HAARP Web site (www.haarp.alaska.edu) for telescience applications and for decision-making during active experiments, and we are also focusing on inverting the TEC data tomographically to produce images of the F layer over Alaska. Research topics under the foregoing objectives are reported in Section 2.

Report on the HAARP 2008 Winter Campaign Focusing on Artificial Ionospheric Irregularities, 31 July 2008 [ 110 Pages, 14.1MB ] – A research campaign was conducted at the joint US joint Air Force, US Navy, and DARPA High-Latitude Active Auroral Research Program (HAARP) site near Gakona, AK, during the period 21 February through 3 March 2008. The focus of the campaign was on generation of plasma-density irregularities in the ionosphere an optical and RF emissions from the ionosphere as a by-product of the interaction between the HAARP HF heater and the atmosphere and ionosphere above HAARP. This report documents the preliminary results obtained from this campaign through short (two to three page) summaries provided by the Principal Investigators for each of the experiments runs.