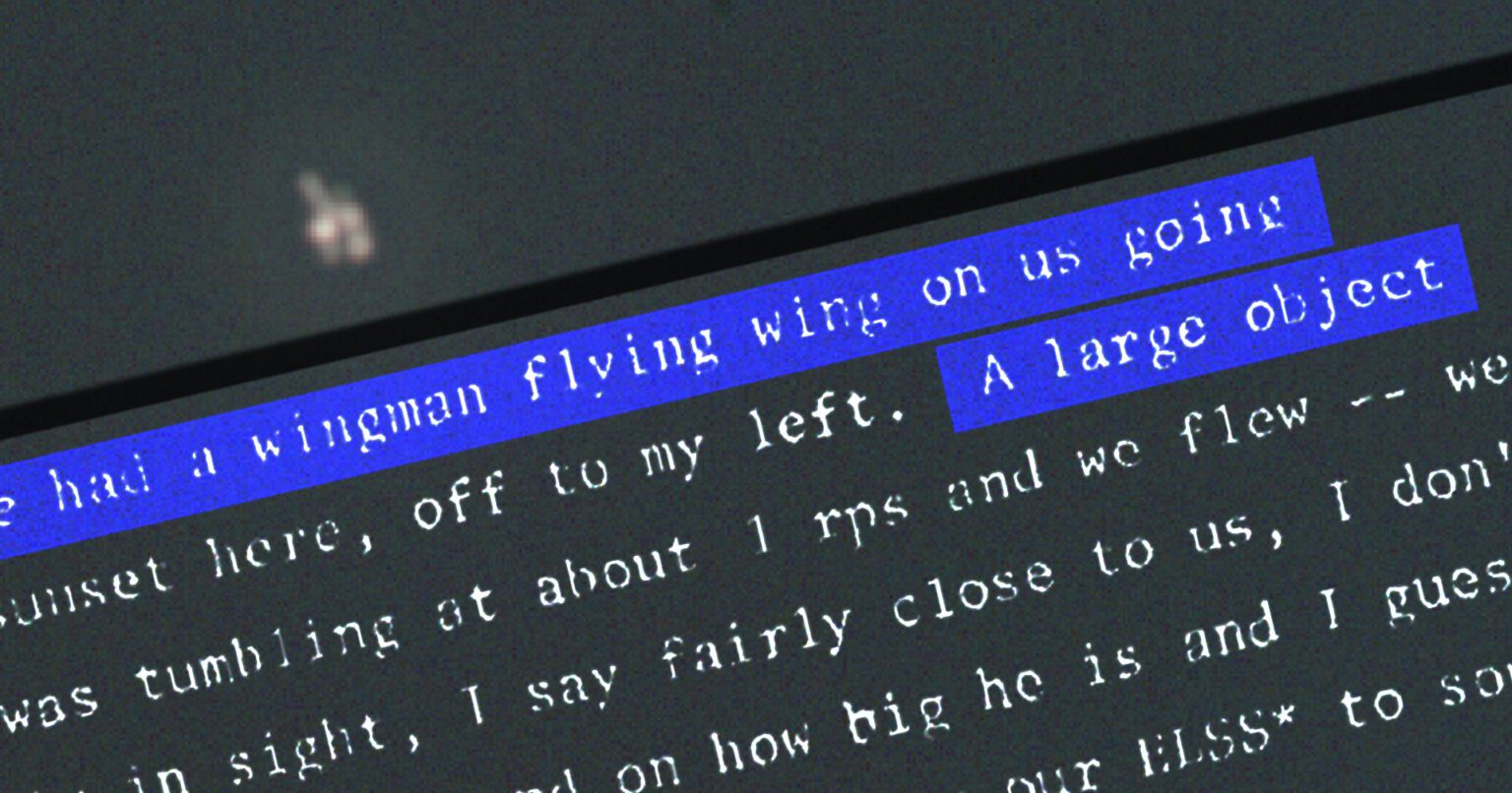 The following is a case that has been around the field of UFO research, known as UFOlogy, for many decades. But, it is rarely talked about nowadays, as sightings from the 1960s are often overshadowed by more modern events.

As the story goes here, during the Gemini XI mission which flew from September 12 to 15, 1966, astronauts Charles “Pete” Conrad Jr. and Richard F. Gordon Jr. performed the first-ever direct-ascent (first orbit) rendezvous with an Agena Target Vehicle. However, in addition to their mission, they encountered something they could not explain – and even captured multiple photographs of it.

On page 106 of the official NASA voice transcript, the sighting was recorded: 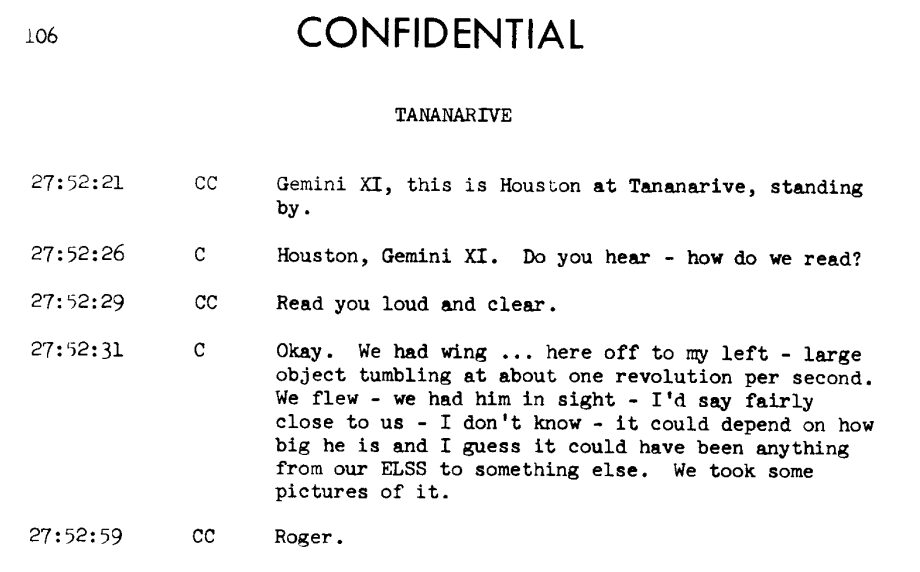 The sighting was also recollected and analyzed in the Condon Report, and ultimately labeled as simply being the Proton III satellite. It should be noted, the below section was part of a larger portion of the Condon Report that was mysteriously missing from copies disseminated by the U.S. government; specifically, the Defense Technical Information Center (DTIC). The entire section on astronauts and their UFO sightings was removed, though The Black Vault later tracked down the COMPLETE version and archived it here. That once missing section contained the below: 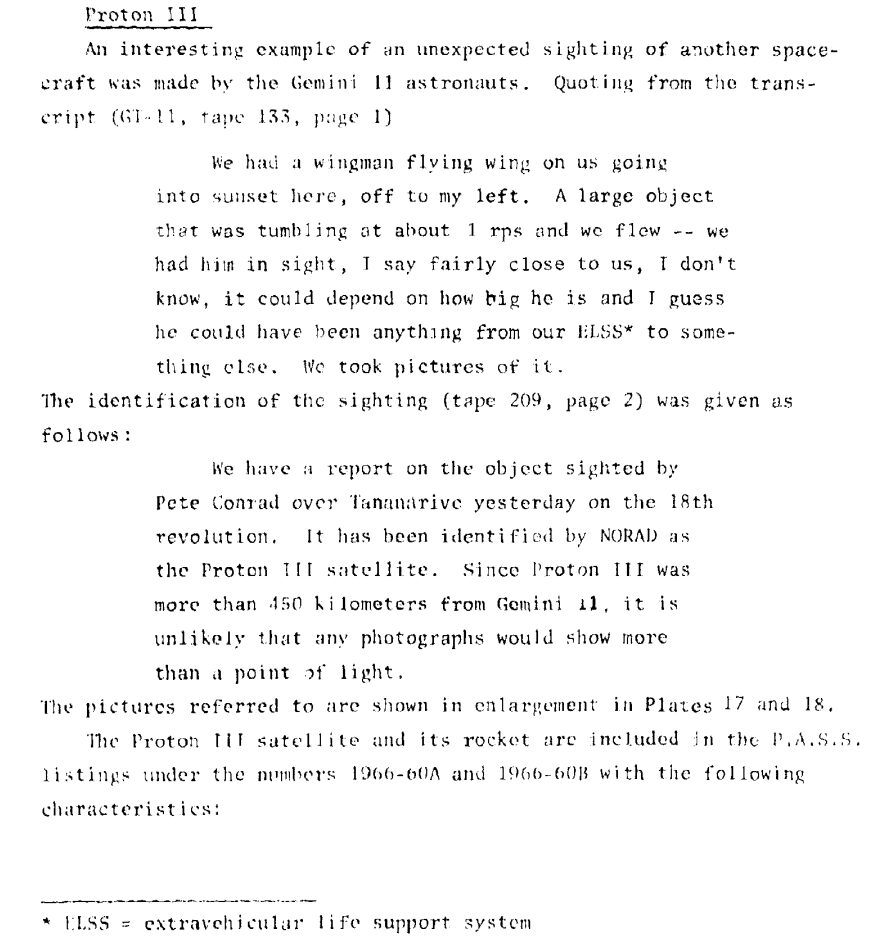 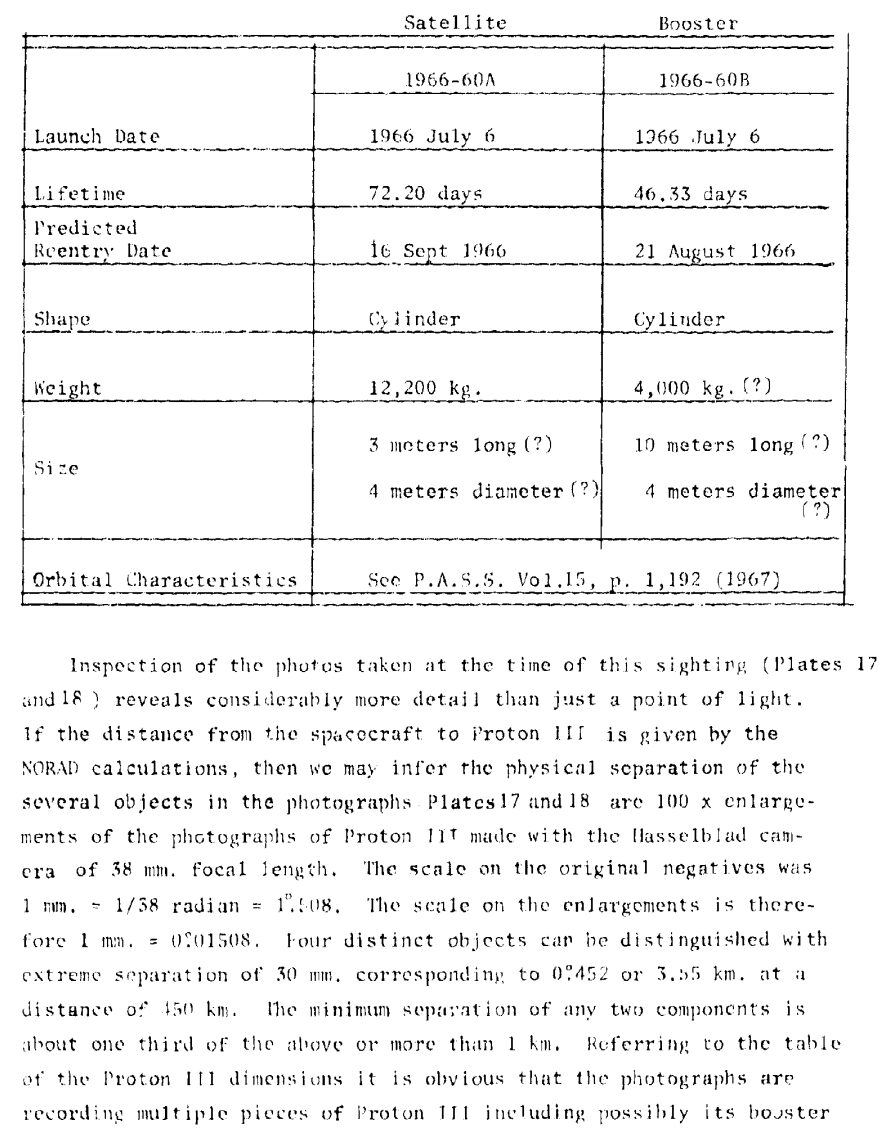 Despite the discrepancy, the Condon report sided with NORAD’s interpretation that it was the Proton III.

Was it? Here are the three high resolution (RAW) photographs taken on that mission.

In the archive of Gemini XI photographs as hosted by the Lyndon B. Johnson Space Center in partnership with Arizona State University’s “School of Earth and Space Exploration,” you can find three photographs that captured the unknown object.

The following are those photographs, cropped and zoomed, headed with their official image identification number and followed by all of the available technical information about the shots. The three photographs in their RAW / High Resolution / unedited format, are also available in an archived

The poorest of the three photos is the first taken. However, it is shown here to show the object itself was indeed captured: 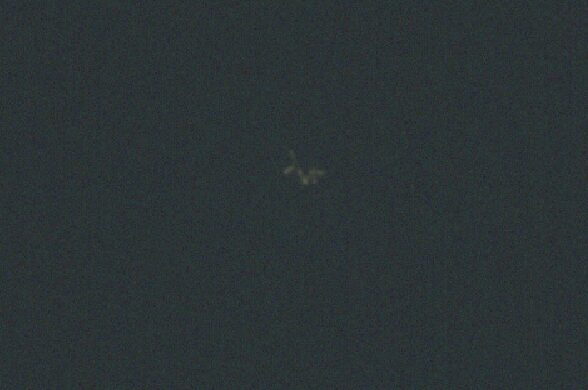 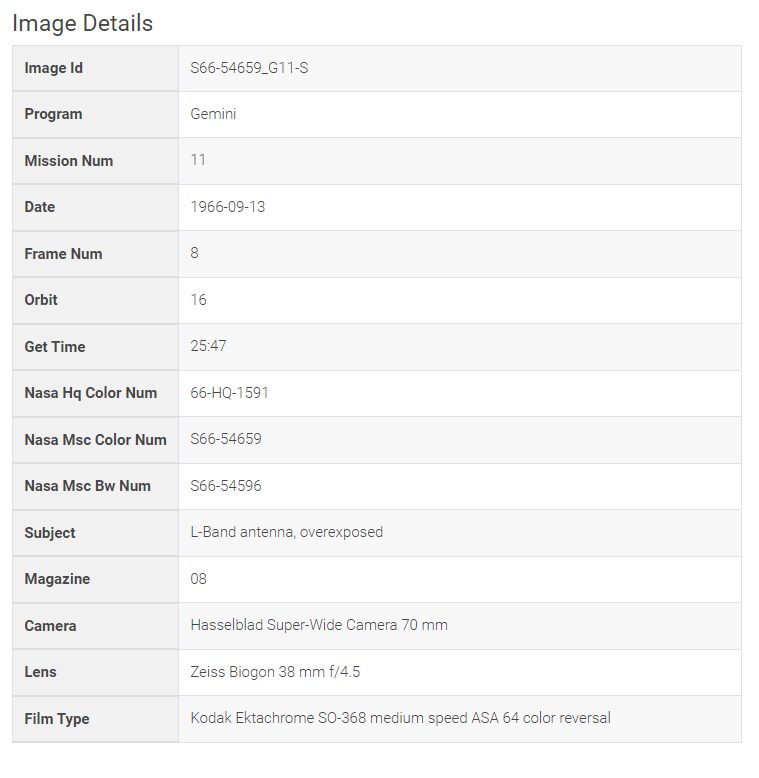 This was the second photograph captured. 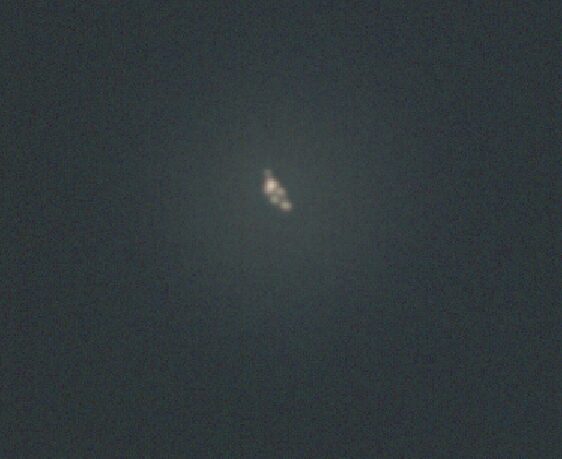 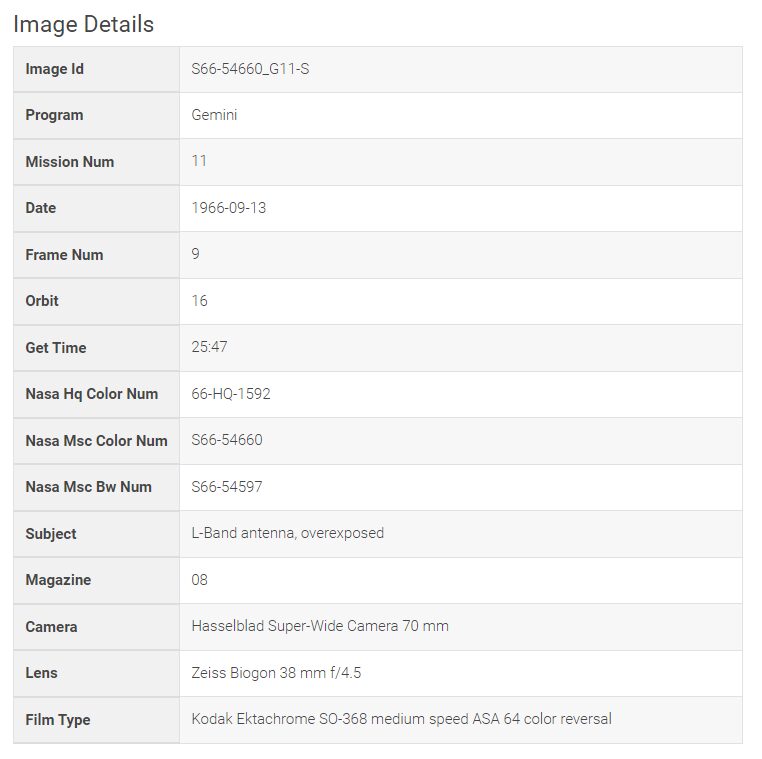 This was the third photograph captured. 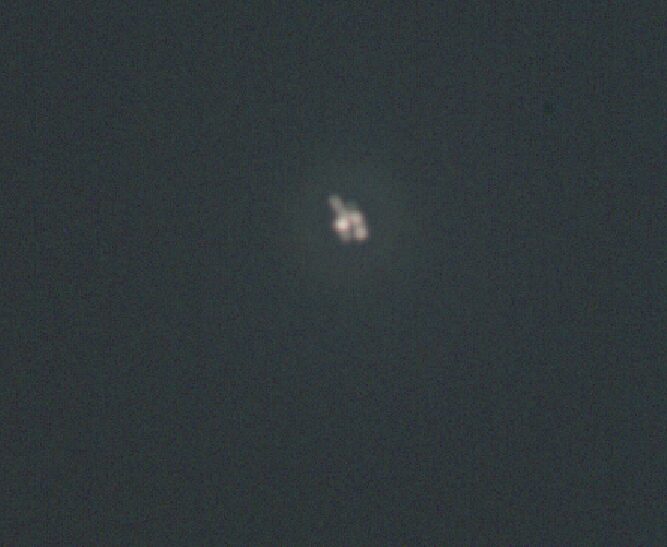 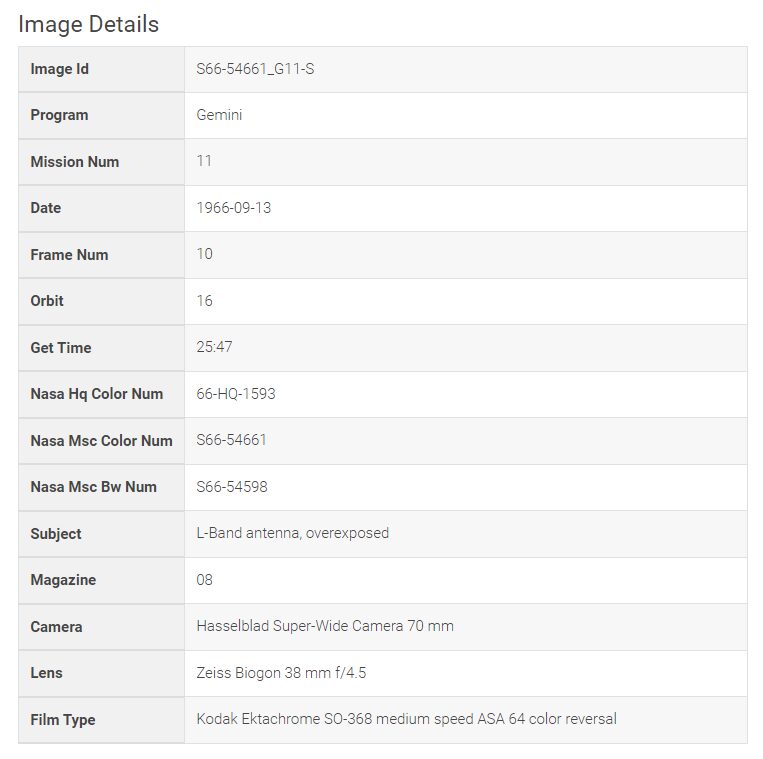 Although these three images below are the full photograph frames, the highest resolution (RAW format) are available in the .zip file above, so make sure you download that if you plan to do your own analysis.

Note: The bright object to the right of each frame is the overexposed L-Band antenna.

Researcher William Johnson created an animated .gif from two of the above photographs, which represents the “tumbling” descriptor used. It offers a nice representation of the object’s movement:

Bruce spent his early years in Rutland, Vt. After high school he studied physics at Worcester Polytechnic Institute in Worcester, Mass (B.S. in physics) and then at The American University, Washington, DC (M.S. and Ph. D. in physics). In 1972 he began his long (36 year) career at the Naval Surface Warfare Center, presently headquartered at Dahlgren, Virginia. He has worked on optical data processing, generation of underwater sound with lasers, various aspects of the Strategic Defense Initiative (SDI), Ballistic Missile Defense (BMD) and Navy ship defense using high power lasers and the development of optical sensors for use in detecting deadly materials commonly used in CBW (chemical and biological warfare). Bruce Maccabee has been active in UFO research since late 1960s when he joined the National Investigations Committee on Aerial Phenomena (NICAP) and was active in research and investigation for NICAP until its demise in 1980. He became a member of MUFON in 1975 and was subequently appointed to the position of state Director for Maryland, a position he held for about 30 years. In 1979 he was instrumental in establishing the Fund for UFO Research and was the chairman for the about 13 years. He presently serves on the National Board of the Fund.

His UFO research and investigations (which are completely unrelated to his Navy work) have included the Kenneth Arnold sighting (Jun 24, 1947), the McMinnville, Oregon (Trent) photos of 1950, the Gemini 11 astronaut photos of September, 1966, the Skylab 3 astronaut sighting of September, 1973, the New Zealand sightings of December, 1978, the Japan Airlines (JAL1628) sighting of November 1986, the numerous sightings of Ed Walters and others in Gulf Breeze, Florida, 1987 – 1988, the “red bubba” sightings,1990-1992 (including his own sighting in September, 1991), the Mexico City video of August, 1997, the Phoenix lights sightings of March 13, 1997 at 10 PM, the Mexican Air Force case of March, 2004, the Iran Jet Case of Sept. 1976 and many others. He has also done historical research and was the first to obtain the “flying disc file” of the FBI (the REAL X-Files!).

Dr. Maccabee is the author or coauthor of about three dozen technical articles and more than a hundred UFO articles since 1970, including many which appeared in the MUFON Journal and MUFON Symposium proceedings. He wrote the last chapter of “The Gulf Breeze Sightings” by Edward and Frances Walters (Morrow, 1990). He wrote the UFO history chapter of the book “UFOs: Zeugen und Zeichen,” published in Germany in 1995. He is co-author with Edward Walters of “UFOs Are Real, Here’s The Proof,” (Avon Books, 1997), he is the author of “The UFO/FBI Connection” (Llewellyn Books, May, 2000) and the updated and expanded version, “The FBI CIA UFO Connection” (Amazon, 2014). He is the author of a unique novel, “Abduction in My Life,” (November, 2000) and the expanded version, “Abduction In My Family” (Amazon, 2015). Two more recent books are “Three Minutes in June, the UFO sighting that changed the World” (Amazon, 2017) and “The Legacy of 1952, the Year of the UFO” (Amazon 2018). He is listed in Who’s Who in Technology Today and American Men and Women of Science and he has appeared in over 200 radio, TV and internet shows and documentaries.

The above case was posted on The Black Vault’s Facebook Group by William Johnson. In addition, special thanks to Bruce Maccabee for the analysis from 2000.