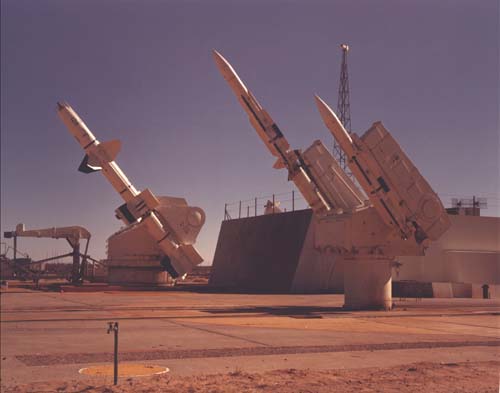 The Navy Bumblebee program was created at the end of WW-II to develop a defense against the Japanese kamikaze threat. The program was to develop a jet propelled, guided anti-aircraft missile. The result was the Navy’s 3-T Missiles – Talos, Terrier and Tartar.

The Talos was first tested at White Sands in 1951 while Terrier and Tartar testing was relocated from China Lake CA in the early 1960s.+

SemiAnnual Report of Bumblebee Project, July-December 1949 [54 Pages, 2.83MB] – The end of 1949 marks the completion of the first five years of the BUMBLEBEE program. It is gratifying to note that the objectives originally scheduled for this five-year period have come reasonably close to realization.

Survey of Bumblebee Activities, July 1952 [52 Pages, 3.25MB] – The general objective of the BUMBLEBEE project, initiated in 1945, has been the developmentof a radar-guided, ramjet-propelled, supersonic missile (Talos). Originally limited to antiaircraftapplication, BUMBLEBEE has been extended to include a long-range, ship-launched, guided bom.bardment missile (Triton) as well as a short-range, solid-rocket-propelled antiaircraft missile(Terrier). These missile objectives have been the outgrowth of a research and development programin basic fields of science related to a guided missile technology.