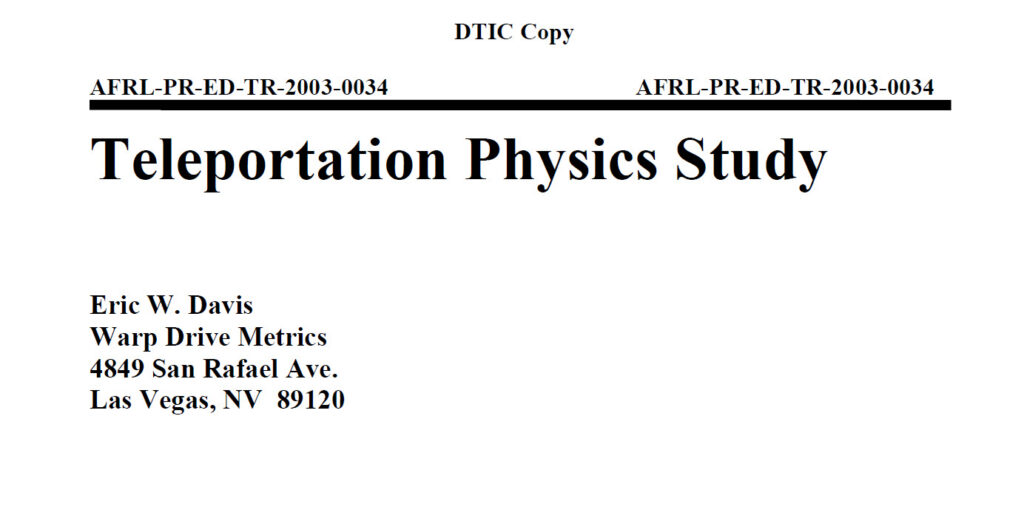 “This study was tasked with the purpose of collecting information describing the teleportation of material objects, providing a description of teleportation as it occurs in physics, its theoretical and experimental status, and a projection of potential applications. The study also consisted of a search for teleportation phenomena occurring naturally or under laboratory conditions that can be assembled into a model describing the conditions required to accomplish the transfer of objects. This included a review and documentation of quantum teleportation, its theoretical basis, technological development, and its potential applications. The characteristics of teleportation were defined and physical theories were evaluated in terms of their ability to completely describe the phenomena.

Contemporary physics, as well as theories that presently challenge the current physics paradigm were investigated. The author identified and proposed two unique physics models for teleportation that are based on the manipulation of either the general relativistic spacetime metric or the spacetime vacuum electromagnetic (zero-point fluctuations) parameters. Naturally occurring anomalous teleportation phenomena that were previously studied by the United States and foreign governments were also documented in the study and are reviewed in the report. The author proposes an additional model for teleportation that is based on a combination of the experimental results from the previous government studies and advanced physics concepts. Numerous recommendations outlining proposals for further theoretical and experimental studies are given in the report. The report also includes an extensive teleportation bibliography.”