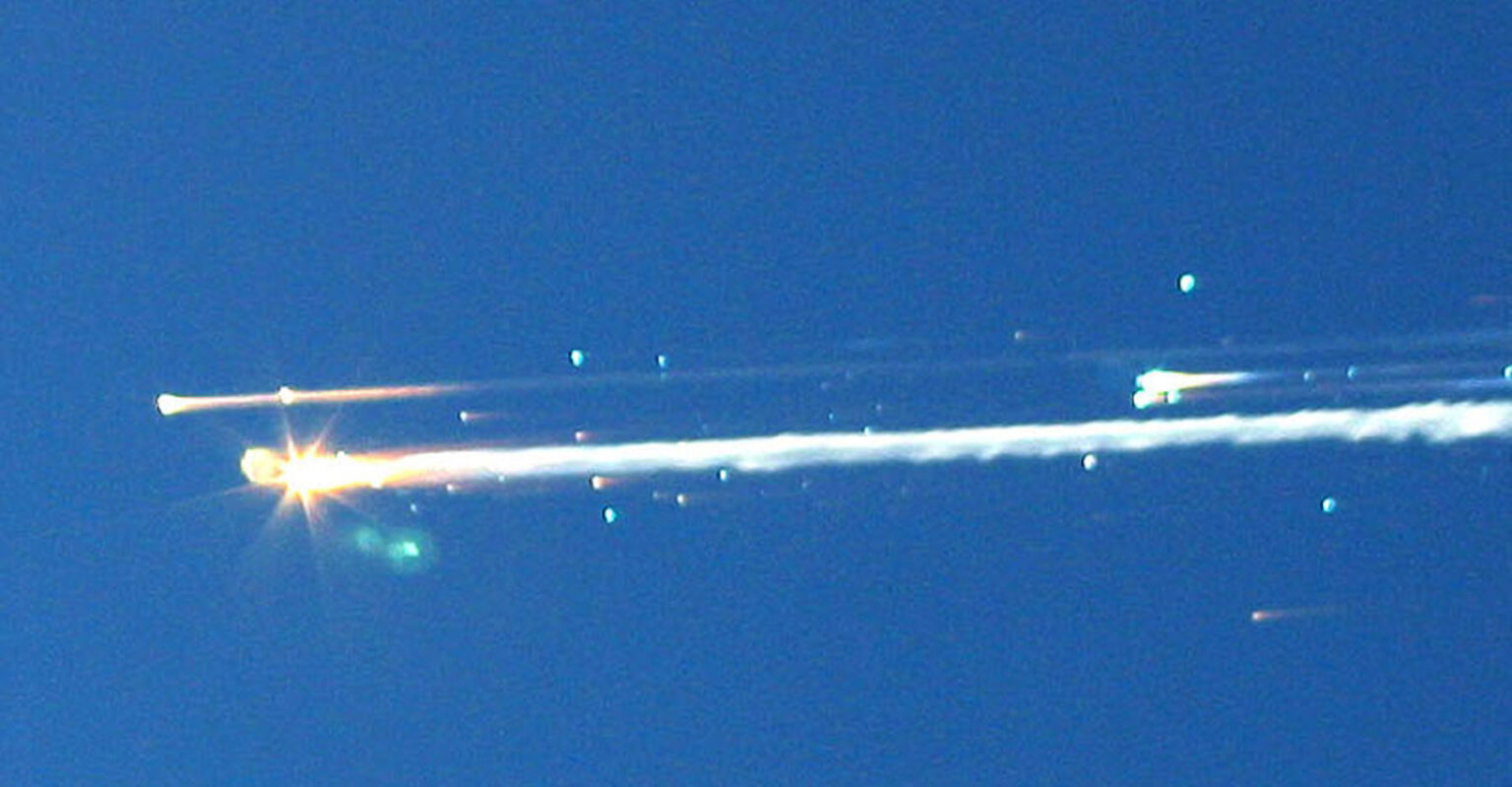 FILE - In this Feb. 1, 2003 file photo, debris from the space shuttle Columbia streaks across the sky over Tyler, Texas. The Columbia broke apart in flames 200,000 feet over Texas on Saturday, killing all seven astronauts just minutes before they were to glide to a landing in Florida. Ten years later, reminders of Columbia are everywhere, including up in the sky. Everything from asteroids, lunar craters and Martian hills, to schools, parks, streets and even an airport (Rick Husband Amarillo International Airport) bear the Columbia astronauts' names. Two years ago, a museum opened in Hemphill, Texas, where much of the Columbia wreckage rained down, dedicated to "remembering Columbia." About 84,000 pounds of that wreckage, representing 40 percent of NASA's oldest space shuttle, are stored at Kennedy and loaned for engineering research. (AP Photo/Scott Lieberman) MANDATORY CREDIT
Science

The disaster was the second fatal accident in the Space Shuttle program after Space Shuttle Challenger, which broke apart and killed the seven-member crew 73 seconds after liftoff in 1986. During the launch of STS-107, Columbia’s 28th mission, a piece of foam insulation broke off from the Space Shuttle external tank and struck the left wing of the orbiter. A few previous shuttle launches had seen damage ranging from minor to major from foam shedding, but some engineers suspected that the damage to Columbia was more serious. NASA managers limited the investigation, reasoning that the crew could not have fixed the problem if it had been confirmed.

When Columbia re-entered the atmosphere of Earth, the damage allowed hot atmospheric gases to penetrate and destroy the internal wing structure, which caused the spacecraft to become unstable and break apart.

Below, you will find various records archived about the incident.

Columbia Recovery Operation – Informal After-Action Report, Date Unknown [53 Pages, 7.5MB] – This was a one-of-a-kind operation in many ways. First, it was a mission no one had expected or prepared for so the response team literally had to “make it up as we went”. It also brought together hundreds of agencies, including thousands of volunteers, most of whom bad never worked together. Finally, it was also very large in scope from at least 3 perspectives: (1) it was a long response operation lasting over 90 days; (2) it was manpower intensive with a peak strength of 6,000 personnel and over 25,000 personnel rotating through from the various agencies; (3) and it covered a large area with search operations of various magnitudes taking place in several states from the California coastline to the Gulf of Mississippi. Additionally, this operation took place as our nation was ramping up for war with Iraq and continued through the end of the war. This posed many challenges with regards to resources being diver ted to support the war effort.

Langley Research Center correspondence, e-mails or other documentation pertaining to Columbia Mission STS-107. (These documents are being posted in groups as they are released. )