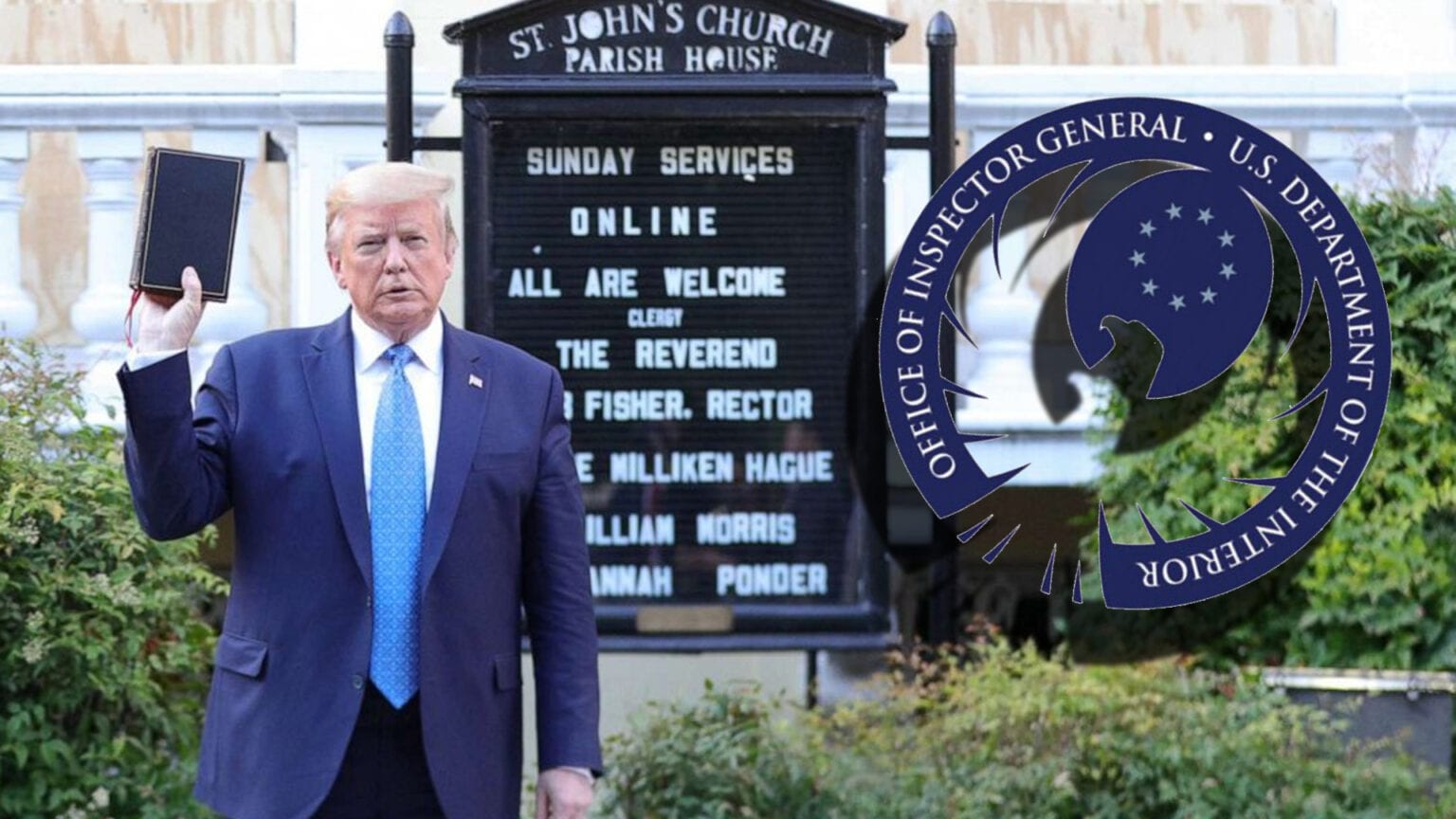 According to the Department of Interior Inspector General (the full report is below):

At the request of then Secretary of the U.S. Department of the Interior David Bernhardt and Members of Congress, we reviewed the actions the U.S. Park Police (USPP) took to disperse protesters in and around Lafayette Park in Washington, DC, on June 1, 2020. Our review focused on events that occurred in and around the park from May 29 through June 3 amid the ongoing Black Lives Matter protests. We sought to describe what occurred primarily from an operational perspective, including how and when the USPP, in coordination with its law enforcement partners, developed and executed its plan to clear the park and the USPP’s reasons for dispersing protesters from the area. We also sought to determine whether the warnings the USPP provided to protesters before it executed the plan complied with applicable guidance. We did not review as part of this project individual uses of force by USPP officers; these actions are the subject of separate inquiries or ongoing lawsuits.

Protests began in and around Lafayette Park on May 29, 2020. On May 30, the USPP and U.S. Secret Service established a unified command to coordinate the law enforcement response to the protests. From May 30 to 31, at least 49 USPP officers were injured while policing the protests, and Federal and private property was vandalized.

On the morning of June 1, the Secret Service procured antiscale fencing to establish a more secure perimeter around Lafayette Park that was to be delivered and installed that same day. The USPP, in coordination with the Secret Service, determined that it was necessary to clear protesters from the area in and around the park to enable the contractor’s employees to safely install the fence. The USPP planned to implement the operation as soon as the fencing materials and sufficient law enforcement officers arrived at the park. Six other law enforcement agencies assisted the USPP and the Secret Service in the operation to clear and secure areas near the park.

The operation began at 6:23 p.m. and was completed by 6:50 p.m. Shortly thereafter, at 7:01 p.m., President Trump walked from the White House through Lafayette Park to St. John’s Church. At 7:30 p.m., the contractor began assembling and installing the antiscale fence and completed the work by approximately 12:30 a.m. on June 2.

We found that the USPP had the authority and discretion to clear Lafayette Park and the surrounding areas on June 1. The evidence we obtained did not support a finding that the USPP cleared the park to allow the President to survey the damage and walk to St. John’s Church. Instead, the evidence we reviewed showed that the USPP cleared the park to allow the contractor to safely install the antiscale fencing in response to destruction of property and injury to officers occurring on May 30 and 31. Further, the evidence showed that the USPP did not know about the President’s potential movement until mid- to late afternoon on June 1—hours after it had begun developing its operational plan and the fencing contractor had arrived in the park.

We also found that although the USPP used a sound-amplifying long-range acoustic device to issue three dispersal warnings to the crowd on June 1, not everyone could hear the warnings. Furthermore, we found that the USPP does not have a detailed dispersal warning policy applicable to operations like the one that occurred on June 1 and that this may have led to the ineffective warnings issued to the crowd that day.

Finally, we found that the USPP and the Secret Service did not use a shared radio channel to communicate, that the USPP primarily conveyed information orally to assisting law enforcement entities, that an assisting law enforcement entity arrived late and may not have received a full briefing on the rules of engagement, and that several law enforcement officers could not clearly hear the incident commander’s dispersal warnings. These weaknesses in communication and coordination may have contributed to confusion during the operation and the use of tactics that appeared inconsistent with the incident commander’s operational plan.

Given the lack of a specific policy, we recommend that the USPP develop a detailed policy for protests and other events of the type that occurred on June 1 and improve its field communication procedures to better manage multiagency operations.