Resignation Letter of Richard Spencer, Secretary of the Navy

Below, you will find the full text of his resignation letter. 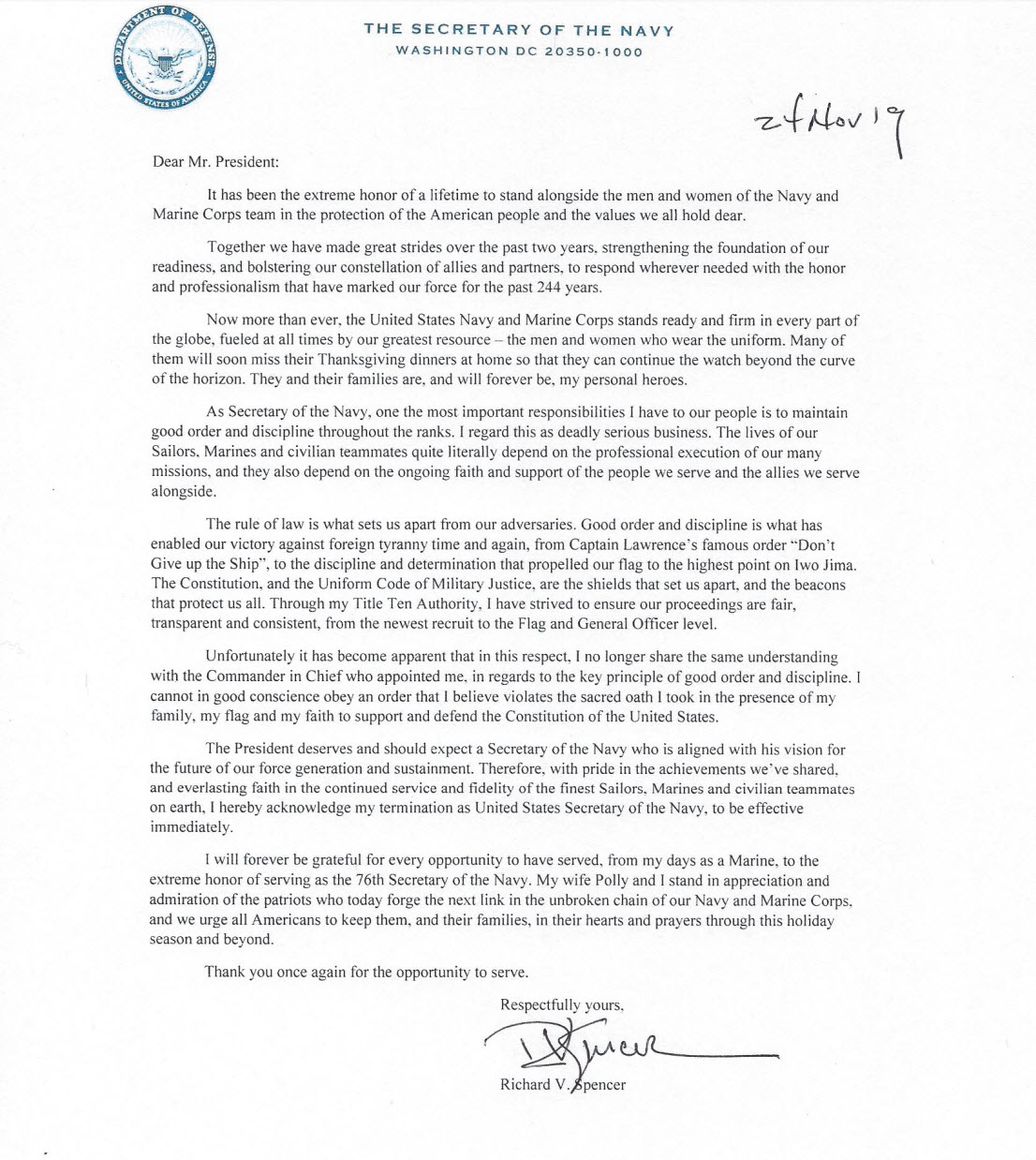 It has been the extreme honor of a lifetime to stand alongside the men and women of the Navy and Marine Corps team in the protection of the American people and the values we all hold dear.

Together we have made great strides over the past two years. strengthening the foundation of our readiness, and bolstering our constellation of allies and partners, to respond wherever needed with the honor and professionalism that have marked our force for the past 244 years.

Now more than ever, the United States Navy and Marine Corps stands ready and firm in every part of the globe, fueled at all times by our greatest resource – the men and women who wear the uniform. Many of them will soon miss their Thanksgiving dinners at home so that they can continue the watch beyond the curve of the horizon. They and their families are, and will forever be, my personal heroes.

As Secretary of the Navy, one of the most important responsibilities I have to our people is to maintain good order and discipline throughout the ranks. I regard this as deadly serious business. The lives of our Sailors, Marines and civilian teammates quite literally depend on the professional execution our many missions, and they also depend on the ongoing faith and support of the people we serve and the allies we serve alongside.

The rule of law is what sets us apart from our adversaries. Good order and discipline is what has enabled our victory against foreign tyranny time and again, from Captain Lawrence’s famous order “Don’t Give up the Ship” to the discipline and determination that propelled our flag to the highest point of Iwo Jima.

The Constitution, and the Uniform Code of Military Justice, are the shields that set us apart, and the beacons that protect us all. Through my Title Ten Authority, I have strived to ensure our proceedings are fair, transparent and consistent, from the newest recruit to the Flag and General Officer level.

Unfortunately, it has become apparent that in this respect, I no longer share the same understanding with the Commander in Chief who appointed me, in regards to the key principle of good order and discipline. I cannot in good conscience obey an order that I believe violates the sacred oath I took in the presence of my family, my flag and my faith to support and defend the Constitution of the United States.

The President deserves and should expect a Secretary of the Navy who is aligned with his vision for the future of our force generation and sustainment. Therefore, with pride in the achievements we’ve shared, and everlasting faith in the continued service and fidelity of the finest Sailors, Marines and civilian teammates on earth, I hereby acknowledge my termination as United States Secretary of the Navy, to be effective immediately.

I will forever be grateful for every opportunity to have served, from my days as a Marine, to the extreme honor of serving as the 76th Secretary of the Navy. My wife Polly and I stand in appreciation and admiration of the patriots who today forge the next link in the unbroken chain of our Navy and Marine Corps, and we urge all Americans to keep them, and their families, in their hearts and prayers through this holiday season and beyond.

Thank you once again for the opportunity to serve.

“Secretary of Defense Mark T. Esper has asked for the resignation of Secretary of the Navy Richard Spencer after losing trust and confidence in him regarding his lack of candor over conversations with the White House involving the handling of Navy SEAL Eddie Gallagher.

Secretary Esper’s position with regard to UCMJ, disciplinary, and fitness for duty actions has always been that the process should be allowed to play itself out objectively and deliberately, in fairness to all parties. However, at this point, given the events of the last few days, Secretary Esper has directed that Gallagher retain his Trident pin.  Secretary Esper will meet with Navy Under Secretary (now Acting Secretary) Thomas Modley and the Chief of Naval Operations Admiral Michael Gilday on Monday morning to discuss the way ahead.

“I am deeply troubled by this conduct shown by a senior DOD official.” said Secretary Esper.  “Unfortunately, as a result I have determined that Secretary Spencer no longer has my confidence to continue in his position. I wish Richard well.”

Secretary Esper has proposed to the President that Ambassador Kenneth Braithwaite, current U.S. Ambassador to Norway and a retired Navy Rear Admiral, be considered as the next Secretary of the Navy.”