According to the (final?) report for Project Outgrowth:

A study was conducted by an ad hoc group within the Air Force Rocket Propulsion Laboratory during the calendar year of 1970 in an attempt to predict the major propulsion developments that may occur in the next 40 years.  This report evaluates the future of conventional chemical rocketry based on thermodynamic principles and revolutionary conceptual approaches to system applications. Advanced concepts falling under the general headings of Thermal, Field and Photon Propulsion are evaluated to a degree necessary to define their potential. This report does not define a long list of very near-term technology program subjects, but is designed to encourage and motivate talented and interested scientists and engineers to once again strive for “Advanced Propulsion Concepts.”

I first read about Project Outgrown in October of 2018, when I created the document archive on laser propulsion. Specifically, it was referenced in a 2017 document:

Perspective on One Decade of Laser Propulsion Research at Air Force Research Laboratory, November 2017 [13 Pages, 1MB]. In this document, the excerpt was as follows:

The concept of laser propulsion was conceived in 1969 at the Air Force Rocket Propulsion Laboratory (AFRPL) by Dr. Robert L. Geisler.1 During 1970, under the direction of Donald M. Ross, a group of 28-scientist/engineers at AFRPL conducted “Project Outgrowth,” which was a systematic study of the Geisler laser propulsion concept and numerous other Advanced Propulsion Concepts. Under the editorship of Franklin B. Mead the findings of “Project Outgrowth” were published in June 1972. Nearly simultaneously, in May 1972, the most-cited laser propulsion paper appeared, “Propulsion to Orbit by Ground-Based Lasers,” authored by “Arthur Kantrowitz.

The objective of the “Project Outgrowth” was to predict and analyze advanced propulsion concepts that could occur during the subsequent 40-years. It was the seed that spawned the modern era of studies of advanced concepts. “Project Outgrowth” also set forth a philosophy for evolution of chemical propulsion that is reminiscent of the modern-day, goal-oriented technology development program known as “Integrated High Payoff Rocket Propulsion Technology,” IHPRPT.

Of course, the above is similar to some aspects of the Advanced Aerospace Weapons Systems Application Program (AAWSAP) or also referred to or connected with the Advanced Aerospace Threat Identification Program (AATIP) which has been referred to as a “secret UFO Study.” It is interesting that AAWSAP, what is considered either the same or the umbrella project of which AATIP operated under, was begun approximately 37 years after this study.  Although a coincidence, it coincides with the aim that they would project propulsion concepts through the next 40 years, and when that time frame was nearly up, AAWSAP was contracted out to a private contractor (as the story goes).  Propulsion was specifically mentioned in the original public AAWSAP solicitation posting among others. The entire scope included:

I do not propose there is a connection, but I have learned in twenty years of researching government secrets, that usually history repeats itself, and to verify something, one just needs to look at documents that have surfaced from past projects. This shows a bit of history with advanced technology research and projecting technology through a 40 year time frame.  Nearly all of the confirmed, and verifiable documents, show this was more of the aim to AAWSAP/AATIP, rather than UFOs specifically (though we know it was an aspect).

Project Outgrowth also pursued “fringe” scientific elements (referred to in the Project Outgrowth document as “Unknown Sciences) that went along with the nuts and bolts of propulsion. According to the study, this would include “psychic forces” and “psychokinesis.”

The document outlines that Project Outgrowth evaluated various aspects of advanced propulsion, like psychokinesis, or the movement of objects by mental forces; tachyon propulsion, or the harnessing of faster-than-light particles; and natural electric energy, or the understanding the difference (and tapping thereof) of the energy between the planet earth and clouds or between the earth and a missile. These “fringe” elements of science very much coincide with the study that would take place nearly 40 years later — very much like the AATIP “DIRD” reports showed  they pursued as well.

I filed various FOIA requests for documents on this study. You will find what has become available below, and more will be added, should they come up.

The above document was forwarded to the CIA, along with many others. Below, is the formal reference to the translated information, though the full text does not reside in the CIA files or the CREST database. I tracked down the full report, which was requested via FOIA from Wright-Patterson Air Force Base (WPAFB) and is available at the above link. 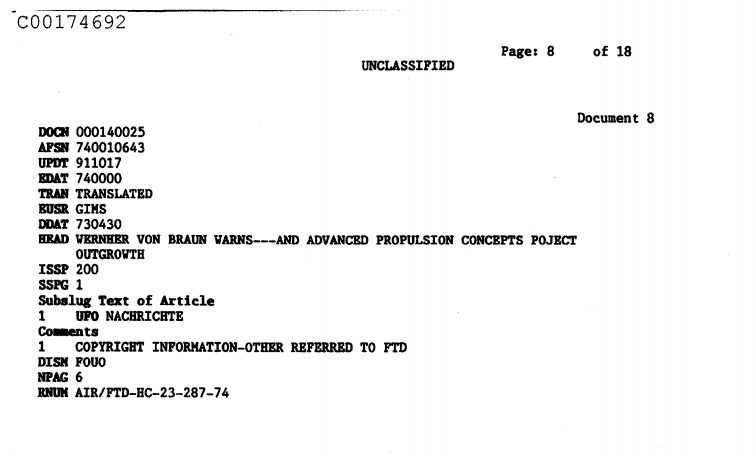 When I posted the

Wernher Von Braun Warns… And Advanced Propulsion Concepts Project Outgrowth, 1973 [15 Pages, 5MB] above, Reddit user kinch07 submitted some excellent additional information on this German publication that was archived by WPAFB and disseminated widely. They submitted the following, and with permission, I have reprinted it here for those interested:

“UFO Nachrichte[n]” which has the “n” missing in the transcript literally translates to “UFO News”. It was a “tabloid newspaper type magazine published by DUIST” which translates to German UFO Studies Community (Deutsche UFO-Studiengemeinschaft). DUIST existed from 1956 until 1988 and was founded by Karl L. Veit and Anny Veit.

Modern Homepage of UFO-nachrichten, looks quite terrible to me

Other Documents of Interest

In 1983, more than 11 years after the above document was published, Princeton Combustion Research Laboratories, under contract with the Air Force Office of Scientific Research (AFOSR), created the below study on space propulsion. They make reference to the research of Project Outgrowth, showing the connection between projected advanced propulsion studies, and that of deep space travel, also very much like the AATIP “DIRD” reports showed.