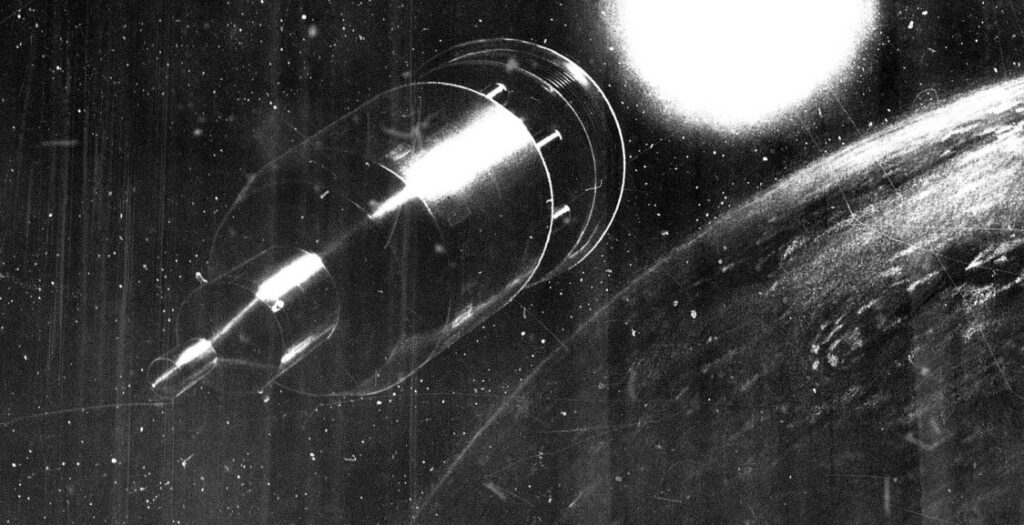 Project Orion was a study of a spacecraft intended to be directly propelled by a series of explosions of atomic bombs behind the craft (nuclear pulse propulsion). Early versions of this vehicle were proposed to take off from the ground with significant associated nuclear fallout; later versions were presented for use only in space.

The Orion concept offered high thrust and high specific impulse, or propellant efficiency, at the same time. The unprecedented extreme power requirements for doing so would be met by nuclear explosions, of such power relative to the vehicle’s mass as to be survived only by using external detonations without attempting to contain them in internal structures. As a qualitative comparison, traditional chemical rockets—such as the Saturn V that took the Apollo program to the Moon—produce high thrust with low specific impulse, whereas electric ion engines produce a small amount of thrust very efficiently. Orion would have offered performance greater than the most advanced conventional or nuclear rocket engines then under consideration. Supporters of Project Orion felt that it had potential for cheap interplanetary travel, but it lost political approval over concerns with fallout from its propulsion.

The Partial Test Ban Treaty of 1963 is generally acknowledged to have ended the project. However, from Project Longshot to Project Daedalus, Mini-Mag Orion, and other proposals which reach engineering analysis at the level of considering thermal power dissipation, the principle of external nuclear pulse propulsion to maximize survivable power has remained common among serious concepts for interstellar flight without external power beaming and for very high-performance interplanetary flight. Such later proposals have tended to modify the basic principle by envisioning equipment driving detonation of much smaller fission or fusion pellets, although in contrast Project Orion’s larger nuclear pulse units (nuclear bombs) were based on less speculative technology.

Currently, I have multiple requests for documents relating to Project Orion. They will be added when they become available.