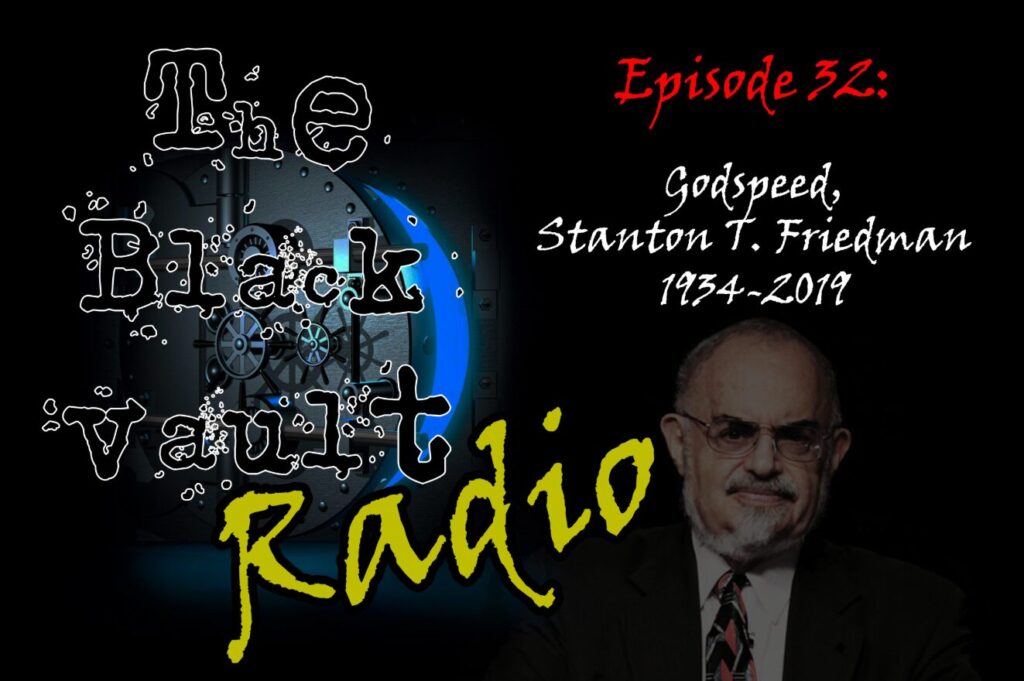 In episode #32 of The Black Vault Radio — I remember my friend, Mr. Stanton Friedman.

Many may have heard this before, but when I started researching at the age of 15, I wrote everyone I could find that was a big name in the field of UFOs in order to make contacts and to learn. Out of everyone I ever wrote in those beginning days, only one wrote back… Stanton Friedman.

He sent me, without charge, a pile of reading material from his own writings. He believed in me, when no one else did, within the field of UFOlogy. To me, that first envelope packed with material he sent to me, represented two things. 1) How amazing, and thorough, of a researcher he really was. But 2) it showed me from the starting gate — he was a gentleman.

We became friends after that. Our friendship would span more than 20 years, and we always enjoyed seeing each other at various conferences and shooting multiple television series together.

Of course, sometimes it is hard to chat one-on-one with a legend like Stanton – many others want a moment of his time as well. But, I was very lucky. Stanton and I would find ourselves in places that allowed us to sit down, one-on-one, and just chat. I remember one instance where he and I sat down for Chinese food together, in a small town outside where he and I both spoke at, and we just chatted, laughed and I was able to soak it all in. He was a legend, in the true sense of the word, but he was also, my friend.

Away from my personal connection with Stanton – I had a pure admiration for what he accomplished. He dug – and dug deep – for answers. He would meticulously turn over every stone he could, to find an answer. He traveled to archives; he picked up the telephone; he read documents; and he just simply dug. We ALL, including myself, can learn from Stanton’s methods and his contributions to not only UFOlogy, but to the true definition of the word RESEARCHER. I learned so much from him, I can not even explain.

About two weeks ago, I spoke with Stanton on the telephone for a while. If I knew that was the last time I would hear his voice, I would’ve said “Thank you.”

Below, you will find a sampling from the original package sent to me by Stanton Friedman, received when I was 15 years old. He will continue to inspire me to be thorough, complete and dig until you find the answers you seek.

Godspeed, Stan, and thank you.