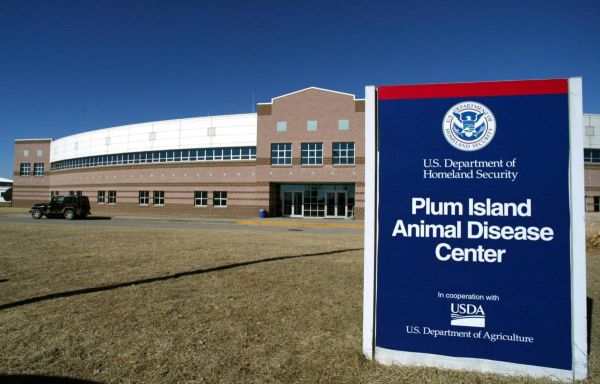 Plum Island Animal Disease Center of New York (PIADCNY) is a United States federal research facility dedicated to the study of animal diseases. It is part of the DHS Directorate for Science and Technology.

Since 1954, the center has had the goal of protecting America’s livestock from animal diseases. During the Cold War a secret biological weapons program targeting livestock was conducted at the site. This program has been the subject of controversy.

The National Bio- and Agro-Defense Facility: Issues for Congress, 19 May 2008 [25 Pages, 0.3MB] – The agricultural and food infrastructure of the United States is potentially susceptible to terrorist attack using biological pathogens. In addition to the impacts of such an attack on the economy, some animal diseases could potentially be transmitted to humans. These diseases are known as zoonotic diseases. Scientific and medical research on plant and animal diseases may lead to the discovery and development of new diagnostics and countermeasures, reducing the risk and impact of a successful terrorist attack. To safeguard the United States against animal disease, Congress has appropriated funds to the U.S. Department of Agriculture (USDA) to engage in research at the Plum Island Animal Disease Center (PIADC), off the coast of New York, on animal diseases not native to the United States. When creating the Department of Homeland Security (DHS) in 2003, Congress transferred the PIADC facility from USDA to DHS. Both USDA and DHS, in cooperation with USDA, conduct foreign animal disease research at PIADC, but PIADC has been identified as outdated and too limited to continue as the primary facility for this research.

I requested a copy of all documents that contain the lists of pathogens which are currently (as of 2013) stored or studied at Plum Island Animal Disease Center.  The below was their response: