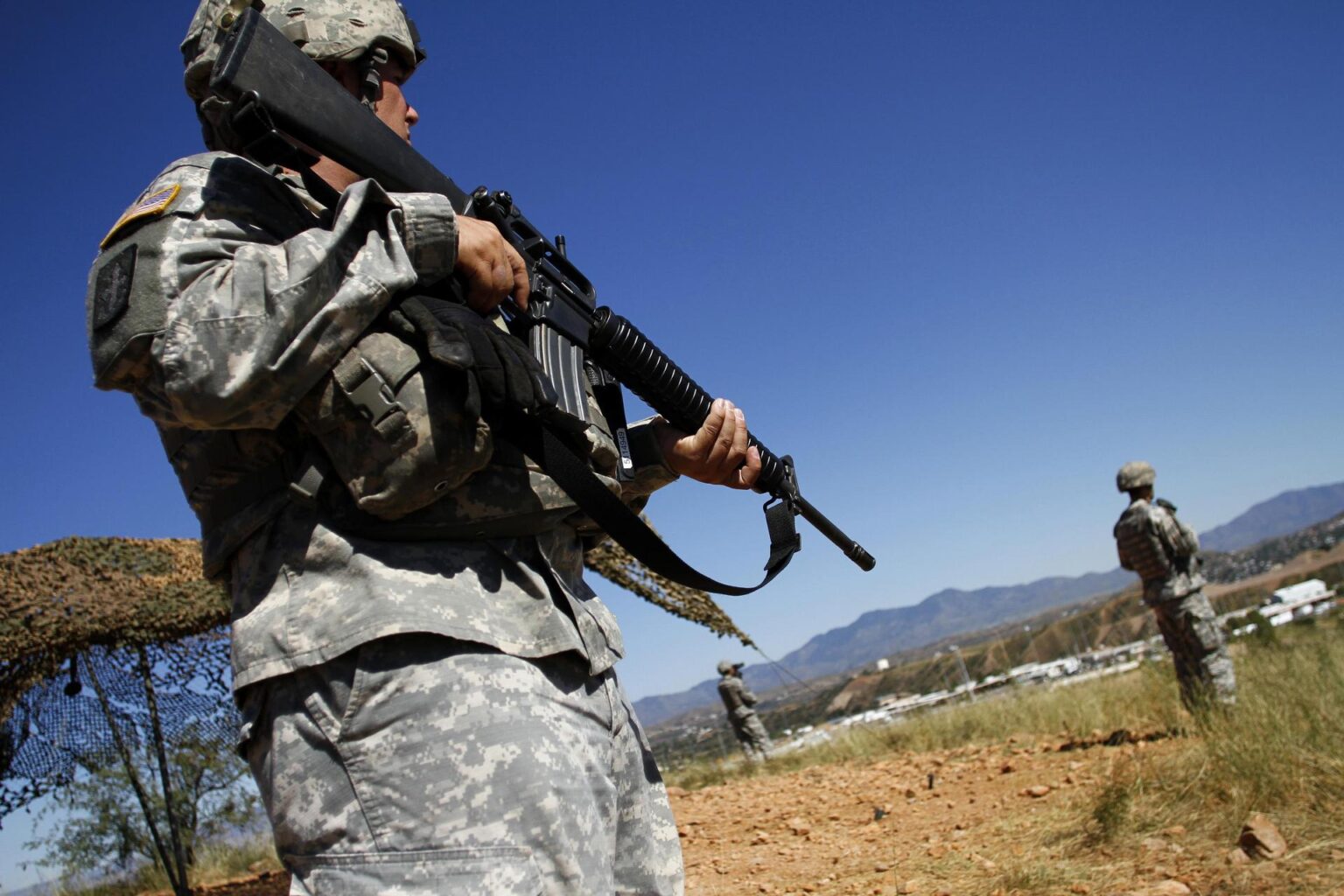 In one such operation, on 15 December 1992 members of the Oregon National Guard (ORNG) Counterdrug Support Program assisted the DEA, BATF, US marshals, and two IRS criminal investigation divisions in executing a search warrant in Hermiston, Oregon. With the support of the ORNG, the agencies seized a number of fully automatic weapons, 42 other weapons, and more than 3000 rounds of ammunition, including .50-caliber armor-piercing rounds. (Description courtesy, GlobalSecurity.org)

Below, are various records released to The Black Vault on, or mention, Operation Ghost Dancer.

Against All Enemies – Using Counter Drug Operations to Train for Infantry Wartime Missions, 31 January 1992 [ 50 pages, 1.53 MB ] – This monograph describes how infantry units can use counterdrug operations to conduct unit Mission Essential Task List (METL) training. The flow of illegal drugs into the United States threatens our way of life. On September 18, 1989 the Secretary of Defense directed the Combatant Commanders to elevate the priority of counterdrug operations within their commands. Since this message legitimized the role of the armed services in the counterdrug war it is imperative that army units understand how to integrate counterdrug tasks into their training plans. This monograph explains how infantry commanders can use counterdrug missions to complement training on current unit METLS and thereby improve their unit combat readiness. Infantry Mission Essential Task List(METL).

Drugs on the Border: The Role of the Military, December 1991  [ 11 pages, 0.9 MB ] – Mention military involvement in counter-drugs, and the fictional Tom Clancy-conceived scenario above may provide the sort of images that come to the average American’s mind. Bloody, violent acts committed against culpable drug smugglers are the stuff of best-selling fiction, but they are just that–fiction. The reality of military support is not so dramatic, but it constitutes a solid contribution to law enforcement and valuable, real-world training for the participating units. This is true wherever the military is involved and especially on the Southwest land border. Although the military has provided counter-drug support for a number of years, the issue came to the fore in the fall of 1989 when President Bush declared drug abuse to be the gravest domestic problem facing our nation and a threat to the national security. These sentiments were seconded by Secretary of Defense Cheney. who declared, The detection and countering of the production, trafficking, and use of illegal drugs is a high priority national security mission of the Department of Defense. Cheney further charged the military’s major commanders with hemispheric responsibilities to draft plans on how they could contribute to the counter-drug effort. That these statements were reaffirmed one year later in the midst of Desert Shield is testament to their enduring importance and a tocsin call for military support. The danger that drugs pose to our nation needs little elaboration. A report by a congressional subcommittee headed by Congressman Nicholas Mavroules concluded, The chief threat to our national security in the 1990s may well come from hoards of red tomato cans [filled with cocaine, an actual smuggling technique]rather than hordes of Red communists. Stories about drug-related violence and human tragedy have filled our newspapers and local newscasts in recent years.

Eyes Behind the Lines: US Army Long-Range Reconnaissance and Surveillance Units, January 2005 [ 188 pages, 1.2 MB ] – Eyes Behind the Lines: US Army Long-Range Reconnaissance and Surveillance Units is the 10th study in the Combat Studies Institute (CSI) Global War on Terrorism (GWOT) Occasional Paper series. This work is an outgrowth of concerns identified by the authors of On Point: The United States Army in Operation IRAQI FREEDOM. Specifically, these authors called into question the use of long-range surveillance (LRS) assets by commanders during that campaign and suggested an assessment ought to be made about their continuing utility and means of employment. This revision contains some important additional information the author received after this book was originally published Major (Retired) James Gebhardt, of CSI, researched and wrote this Occasional Paper with that end in view. In this study, Gebhardt surveys the US Army s historical experience with LRRP and LRS units from the 1960s Cold War and Vietnam War, through their resurgence in the 1980s and use in Operations JUST CAUSE and DESERT STORM, to the advent of the GWOT. The paper’s analytical framework examines each era of LRS units in terms of doctrine, organization, training, materiel, leadership, and personnel. In doing so, the author makes a strong case for continuing the LRS capability in the Army s force structure. The variety of environments and enemies likely to be faced by the military in the GWOT continues to demand the unique human intelligence abilities of trained and organized LRS units. As the Army leads the Armed Forces of the United States in combating terrorists where they live, the lessons found in this survey remain timely and relevant.

Operation Ghost Dancer: The Use of Active Duty Army Forces in Marijuana Eradication, 11 March 1991 [ 73 pages, 2.32 MB ] – The ‘War on Drugs’ is the number one domestic issue confronting the Nation today. Since the 1980’s, the Department of Defense (DOD) has played a role in the ‘War on Drugs,’ although reluctantly. In 1990, there was an emphasis on the part of the Department of Defense to perform its fair share of the national effort. This effort included five major drug eradication missions which the Department of Defense supported. In one of these operations, Operations Ghost Dancer, the active Army contributed the majority of the military forces in support of a Bureau of Land Management drug eradication mission. This was the Nation’s first large scale use of active duty Army soldiers in counter-drug operations. Many lessons were learned that apply to all levels of civilian and military command. However, of particular importance are the lessons learned that apply to the senior Army Leadership. These areas include the need for an improved vision of where we are heading; standardization and clarification of the Posse Comitatius requirements and the rules of engagement; and clarification of resource request procedures.

U.S. Army Aviation Participation in the Counterdrug Effort, 29 March 1993 [ 45 pages, 1.74 MB ] – Illicit drugs account for tremendous losses to American society in health, law enforcement, imprisonment, absenteeism, crime, and corruption. Only through a genuine national effort that encompasses every aspect of our society, civilian and military, can we hope to eliminate the scourge of illegal drug use and traffic. The supply and demand sides of the drug issue are equally important. Only through a comprehensive and continuous effort will we make progress. The military’s role is not to fight the war on drugs but to ‘support the effort.’ The military has contributed considerable resources and has enhanced law enforcement operations with useful tactics and techniques. The advanced technology, speed, and flexibility inherent in Army Aviation can support law enforcement agencies in curtailing drug traffic. This study presents an over-view of the national drug control strategy, discusses the Department of Defense mission, and describes the U.S. Army’s role in the counterdrug effort The study examines the extent of the problem, suggests approaches to the problem, and analyzes the capabilities possessed by the military, with special emphasis on Army Aviation. The study considers the progress we have made, presents a projection of the future, and provides conclusions.