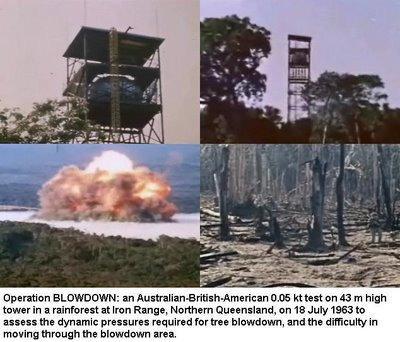 Operation Blowdown was a military operation that took place on 18 July 1963. Conducted in northern Queensland, Australia by a joint Australian-American-British team, it was designed to simulate the effects of a nuclear weapon on tropical rainforest, using 50 tons of conventional explosive (TNT).

A device containing 50 tons of TNT was detonated to partially simulate a ten kiloton air burst in the Iron Range jungle of the Cape York Peninsula. The explosives were sourced from obsolete artillery shells and placed in a tower 42 metres above ground level and 21 metres above the rain forest canopy. After the explosion, troops were moved through the area (which was now covered in up to a metre of leaf litter), to test their ability to transit across the debris. In addition, obsolete vehicles and equipment left near the centre of the explosion were destroyed.

The explosion was intended by the Robert Menzies government to test and examine the feasibility of air burst nuclear weapons for clearing forests and the use of mangled forests to slow troop movement in South East Asia, primarily Indonesia and Malaysia in the escalation of the time against Sukarno and the Konfrontasi Malay Emergency. There was also a view to use such techniques in the later Myanmar conflict and Vietnam War, which were simmering at the time.

United States participation included the establishment of pressure measurement equipment and the loan of photographic and instrumentation equipment.

The following are documents related to, or mentioning, Operation Blowdown:

OPERATION BLOWDOWN [200 Pages, 18.66 MB] – This report on Operation BLOWDOWN describes an Australian field test in which a 50-ton HE charge was detonated over a typical rain forest at the Iron Range Test Site, North Queensland, Australia. U. S. participation included the establishment of a blast line to obtain overpressure and dynamic pressure measurements, as well as the loan of instrumentation and photographic equipment. The experiment also included military trial projects which examined the blast effects in forests on items of military material, field fortifications, supply points, and foot and vehicle movement. This report presents preliminary results in each area of the experiment. (Author)