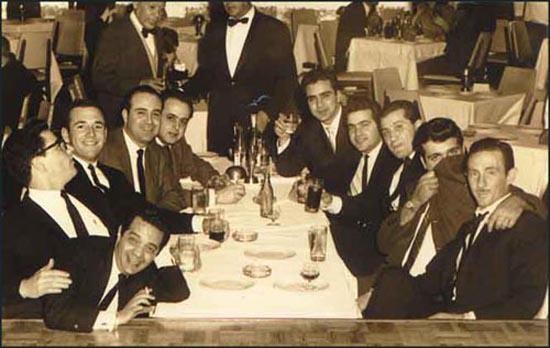 This photograph was taken in a nightclub in Mexico City on 22nd January, 1963. It has been argued by Daniel Hopsicker that the men in the photograph are all members of Operation 40.
History

Operation 40 was a Central Intelligence Agency-sponsored undercover operation in the early 1960s, which was active in the United States and the Caribbean (including Cuba), Central America, and Mexico. It was approved by President Dwight D. Eisenhower in March 1960, after the January 1959 Cuban Revolution, and was presided over by Vice-president Richard Nixon.

The group included Frank Sturgis (who would later become one of the Watergate burglars); Felix Rodriguez (a CIA officer who later was involved in the capture and summary execution of Che Guevara); Luis Posada Carriles (held in the US in 2010 on charges of illegal immigration, he is demanded by Venezuela for his key role in the execution of the 1976 Cubana Flight 455 bombing); Orlando Bosch (founder of the counterrevolutionary Coordination of United Revolutionary Organizations, that organized the 1976 murder of Chilean former minister Orlando Letelier); Rafael ‘Chi Chi’ Quintero; Virgilio Paz Romero; Pedro Luis Diaz Lanz; Bernard Barker; Porter Goss; and Barry Seal. Members took part in the April 1961 Bay of Pigs Invasion directed against the government of Cuban revolutionary leader Fidel Castro.

Operation 40 was rumored to have had 86 employees in 1961, of which 37 were trained as case officers.

Central Intelligence Agency (CIA) Records on Operation 40 [7 Pages, 1.47MB] – Although the CIA released a few pages, they went on to state they would neither confirm nor deny any additional pages existed.  Why, after 50+ years, would they remain such a secret?