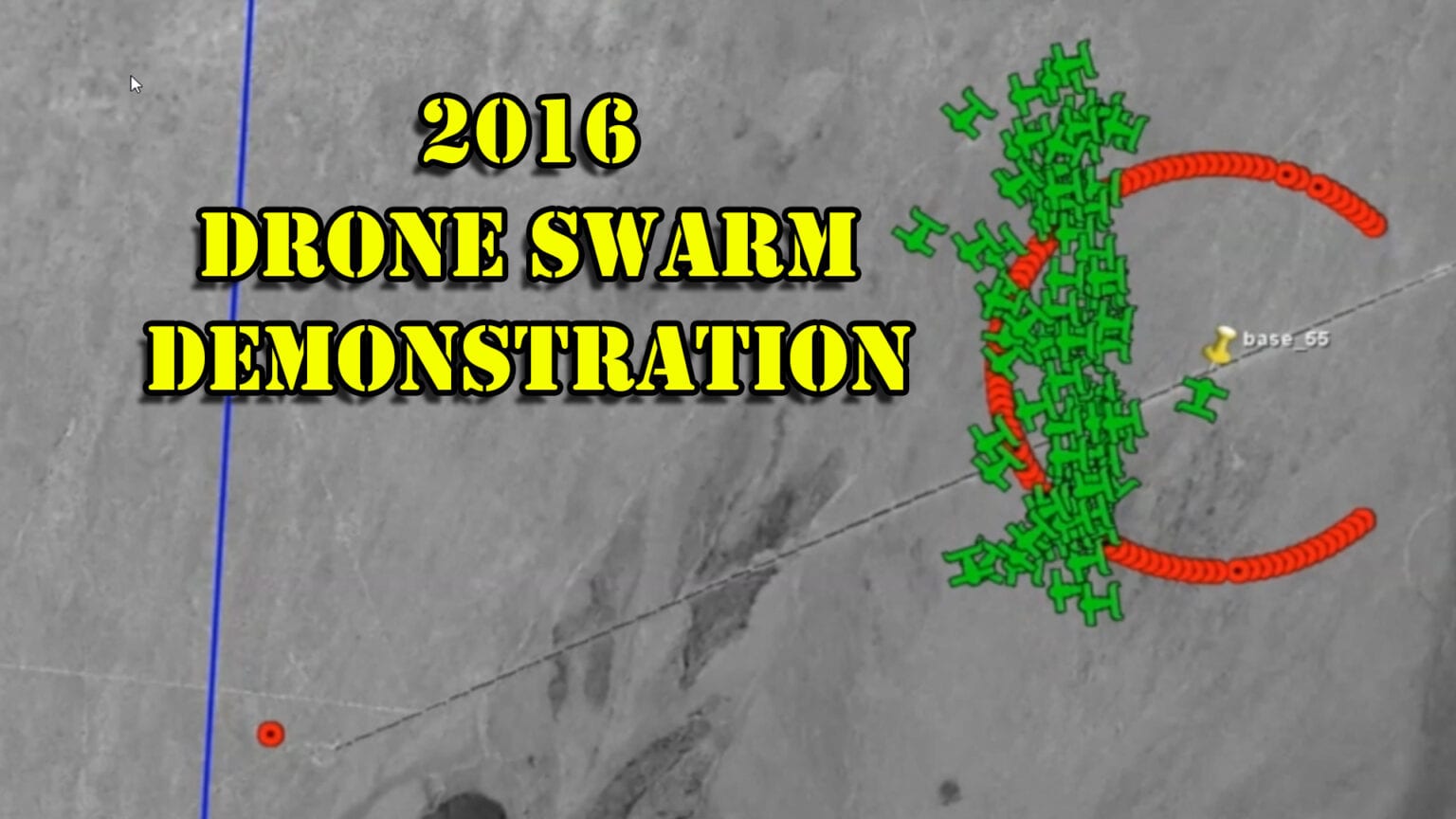 This is a video, and press release, published by the Department of Defense. It is about a demonstration of a Perdix micro-UAV swarm demonstration held at China Lake, California, on Oct. 26, 2016.

The original DoD Press Release, published on January 9, 2017, read as the following:

In one of the most significant tests of autonomous systems under development by the Department of Defense, the Strategic Capabilities Office, partnering with Naval Air Systems Command, successfully demonstrated one of the world’s largest micro-drone swarms at China Lake, California. The test, conducted in October 2016 and documented on Sunday’s CBS News program “60 Minutes”, consisted of 103 Perdix drones launched from three F/A-18 Super Hornets. The micro-drones demonstrated advanced swarm behaviors such as collective decision-making, adaptive formation flying, and self-healing.

“I congratulate the Strategic Capabilities Office for this successful demonstration,” said Secretary of Defense Ash Carter, who created SCO in 2012. “This is the kind of cutting-edge innovation that will keep us a step ahead of our adversaries. This demonstration will advance our development of autonomous systems.”

“Due to the complex nature of combat, Perdix are not pre-programmed synchronized individuals, they are a collective organism, sharing one distributed brain for decision-making and adapting to each other like swarms in nature,” said SCO Director William Roper. “Because every Perdix communicates and collaborates with every other Perdix, the swarm has no leader and can gracefully adapt to drones entering or exiting the team.”

The demonstration is one of the first examples of the Pentagon using teams of small, inexpensive, autonomous systems to perform missions once achieved only by large, expensive ones. Roper stressed the department’s conception of the future battle network is one where humans will always be in the loop. Machines and the autonomous systems being developed by the DoD, such as the micro-drones, will empower humans to make better decisions faster.

Originally designed by Massachusetts Institute of Technology engineering students, the Perdix drone was modified for military use by the scientists and engineers of MIT Lincoln Laboratory starting in 2013. Drawing inspiration from the commercial smartphone industry, Perdix software and hardware has been continually updated in successive design generations. Now in its sixth generation, October’s test confirmed the reliability of the current all-commercial-component design under potential deployment conditions—speeds of Mach 0.6, temperatures of minus 10 degrees Celsius, and large shocks—encountered during ejection from fighter flare dispensers.

The “60 Minutes” segment also featured other new technology from across the Department of Defense such as the Navy’s unmanned ocean-going vessel, the Sea Hunter, and the Marine Corps’ Unmanned Tactical Control and Collaboration program.

As SCO works with the military Services to transition Perdix into existing programs of record, it is also partnering with the Defense Industrial Unit-Experimental, or DIUx, to find companies capable of accurately replicating Perdix using the MIT Lincoln Laboratory design. Its goal is to produce Perdix at scale in batches of up to 1,000.