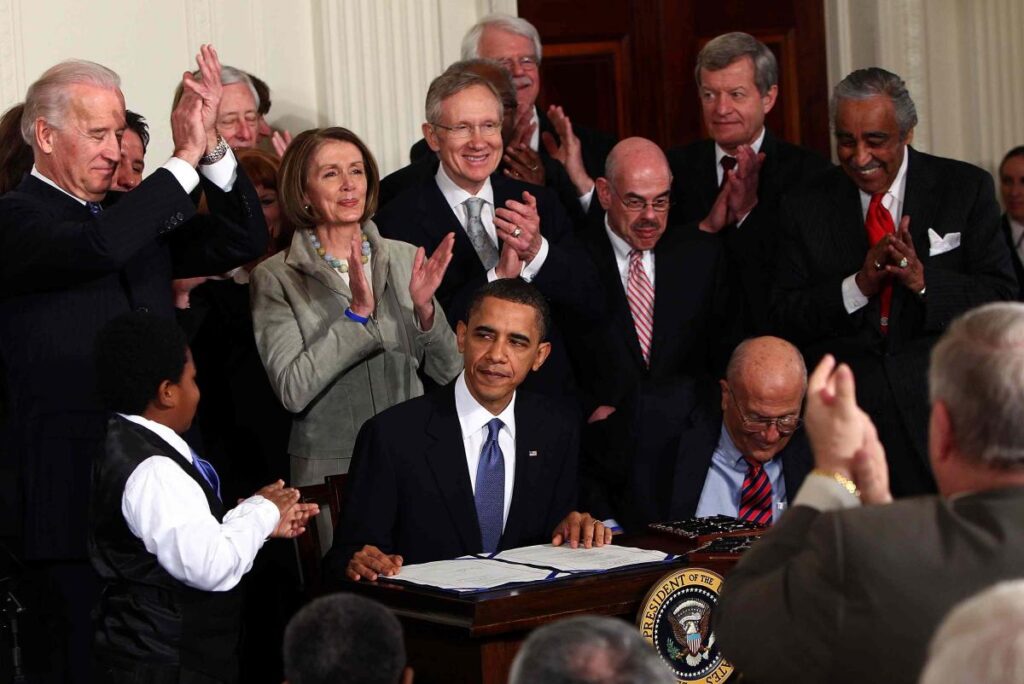 The Patient Protection and Affordable Care Act (PPACA), commonly called the Affordable Care Act (ACA) or “Obamacare”, is a United States federal statute signed into law by President Barack Obama on March 23, 2010. Together with the Health Care and Education Reconciliation Act, it represents the most significant regulatory overhaul of the country’s healthcare system since the passage of Medicare and Medicaid in 1965.

The ACA aims to increase the quality and affordability of health insurance, lower the uninsured rate by expanding public and private insurance coverage, and reduce the costs of healthcare for individuals and the government. It provides a number of mechanisms—including mandates, subsidies, and insurance exchanges—to increase coverage and affordability.  The law also requires insurance companies to cover all applicants within new minimum standards and offer the same rates regardless of pre-existing conditions or sex. Additional reforms aim to reduce costs and improve healthcare outcomes by shifting the system towards quality over quantity through increased competition, regulation, and incentives to streamline the delivery of healthcare. The Congressional Budget Office projected that the ACA will lower both future deficits and Medicare spending.

On June 28, 2012, the United States Supreme Court upheld the constitutionality of most of the ACA in the case National Federation of Independent Business v. Sebelius. However, the Court held that states cannot be forced to participate in the ACA’s Medicaid expansion under penalty of losing their current Medicaid funding. Since the ruling, the law and its implementation have continued to face challenges in Congress, in federal courts, and from some state governments. Efforts to oppose, undermine, and repeal the legislation have drawn support from prominent conservative advocacy groups, Congressional and many state Republicans, certain small business organizations, and the Tea Party movement.

The following documents include declassified records, along with public law and signed legislation.

Full Text of the Patient Protection and Affordable Care Act

What exactly is this version? Tom Giffey, of the Leader-Telegram, explains it best: “As you may recall, the Democrats’ loss of a supermajority in the Senate in early 2010 led to parliamentary gymnastics to pass an amended version of the bill in a way that avoided a Republican filibuster; this was done through the so-called “reconciliation” process, which limits debate on spending bills. As far as I can tell, including this reconciliation act makes the document a bit longer.”  (Source)

HEALTH INSURANCE MARKETPLACE: NOVEMBER ENROLLMENT REPORT, November 13, 2013 [28 Pages, 0.7MB] – This issue brief highlights national and state-level enrollment-related information for the first month of the Health Insurance Marketplace (Marketplace hereafter) initial open enrollment period that began October 1, 2013 for coverage beginning January 1, 2014 (see Appendix A for state-level data). It also provides an overview of the methodology that was used in compiling these data (see Appendix B), and includes information about strategies to reach consumers.

The 2012 Long-Term Budget Outlook [110 Pages, 1.38MB] – Report by the Congressional Budget Office (CBO), June 2012.  Multiple references to the Affordable Care Act and its influence on the debt.

DOD Health Care: Cost Impact of Health Care Reform and the Extension of Dependent Coverage, 26 September 2011 [16 Pages, 0.4MB] – The Department of Defense (DOD) offers health care to eligible beneficiaries through TRICARE, its health care program.1 Recently enacted health care reform legislation the Patient Protection and Affordable Care Act (PPACA) and the Health Care and Education Reconciliation Act of 2010 (HCERA)2 has implications for much of the nation s health care system, including TRICARE.3 One particular health reform provision directed certain health insurance plans to extend coverage to dependents up to age 26.4 Though this provision does not apply to TRICARE because it is not considered a health insurance plan,5 the subsequent Ike Skelton National Defense Authorization Act for Fiscal Year 2011 (NDAA 2011) included a similar provision that extends TRICARE coverage to certain dependent children of TRICARE beneficiaries.6 In response, in May 2011, DOD began implementing TRICARE Young Adult (TYA), a premium-based health care plan7 that extends TRICARE coverage to dependents of TRICARE beneficiaries up to age 26 who do not have access to employer-sponsored health care coverage and are unmarried.8 The NDAA 2011 directed us to assess the cost to DOD of complying with PPACA and HCERA. You also asked us to examine DOD s costs of implementing, administering, and providing benefits under TYA. In this report, we assess DOD s costs of (1) complying with PPACA and HCERA and (2) implementing and providing benefits under TYA.

National Healthcare Reform: Implications for the Military Healthcare System [36 Pages, 0.7MB] – For decades, economists, forward thinking lawmakers and academicians have issued warnings that continued escalating healthcare costs and an aging population would lead to a day of fiscal reckoning. Today, healthcare spending exceeds $2.1 trillion annually hitting twice that spent on food. Liberal benefits entailing little out of pocket expenses from the consumer lead the list of causes. Hospital and physician expenses experiencing little price discipline are at the heart of an emerging crisis in the American healthcare industry. Paralleling the civilian sector, department of defense medical costs have escalated, now threatening to exceed of the defense budget. Military leaders recognizing the link between open ended access to healthcare and excessive utilization, despite their warnings have met with stiff resistance from a broad coalition of lobbyists and elected representatives to implement reforms. The recent passage of the Patient Protection and Affordable Care Act (PPACA), injects an impetus toward change, however unless addressed comprehensively, the cost of healthcare will continue to rise independently from the stated goals of quality, equity, affordability. Regardless of its previous shortcomings, the Military Healthcare System (MHS) is unique as a large government run healthcare organization which could positively impact national healthcare reform.

TRICARE and VA Health Care: Impact of the Patient Protection and Affordable Care Act, 22 April 2010 [16 Pages, 0.4MB] – The 111th Congress recently passed, and the President signed into law, the Patient Protection and Affordable Care Act (P.L. 111-148; PPACA), as amended by the Health Care and Education Reconciliation Act of 2010 (P.L. 111-152; HCERA). In general, PPACA did not make any significant changes to the Department of Defense (DOD) TRICARE program or to the Department of Veterans Affairs (VA) health care system. However, many have sought clarification as to whether certain provisions in PPACA, such as a mandate for most individuals to have health insurance, or extending dependant coverage up to age 26, would apply to TRICARE and VA health care beneficiaries. To address some of these concerns, Congress has introduced and/or enacted legislation. The TRICARE Affirmation Act (H.R. 4887), passed by both the House and the Senate and received by the President, would affirm that TRICARE satisfies the minimum acceptable coverage requirement in PPACA. Similarly S. 3162 (passed by the Senate on March 26, 2010) and H.R. 5014 (introduced in the House on April 14, 2010) would, if enacted, clarify that the Civilian Health and Medical Program of the Department of Veterans Affairs (CHAMPVA), Spina Bifida Health Care Program, and the Children of Women Vietnam Veterans Health Care Program meet the “minimum essential coverage” requirement under PPACA. In addition, the TRICARE Dependent Coverage Extension Act (H.R. 4923; S. 3201), if enacted, would extend certain PPACA provisions to TRICARE beneficiaries. This report addresses key questions concerning how PPACA will likely affect TRICARE and VA health care. This report will be updated if events warrant.