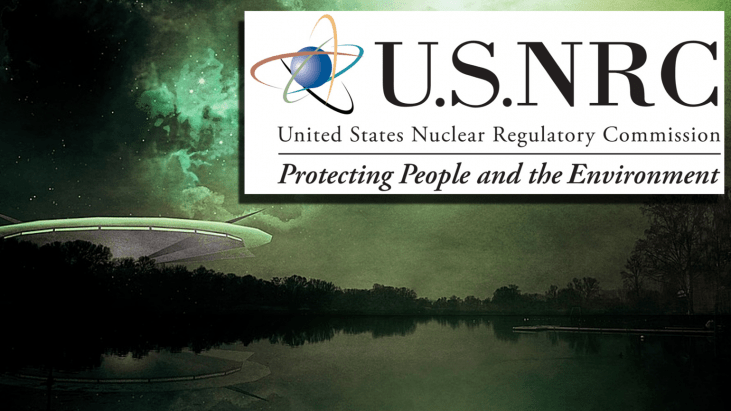 According to the U.S. Nuclear Regulatory Commission (NRC):

The U.S. Nuclear Regulatory Commission (NRC) was created as an independent agency by Congress in 1974 to ensure the safe use of radioactive materials for beneficial civilian purposes while protecting people and the environment. The NRC regulates commercial nuclear power plants and other uses of nuclear materials, such as in nuclear medicine, through licensing, inspection and enforcement of its requirements.

Over the years, many UFO reports have surfaced regarding unidentified craft being seen over sensitive nuclear installations. It only makes sense, that the NRC would be a prime target under the Freedom of Information Act (FOIA) for documents relating to the phenomena.

The documents were received relatively quickly. They were requested by The Black Vault on February 27, 2017, and were released to me on March 23, 2017.

Most surprising, there is new information never-before-seen within these records.  It is revealed that a former security guard of the Cooper Nuclear Station witnessed a UFO sometime between the years 1986 and 1989.  The report described the UFO encounter as the following:

While posted at the intake structure one night, he observed an “unidentified flying object” fly down the Missouri River about 150 feet in the air and hover in front of the intake. He observed it for a few moments and then contacted a fellow security officer who also observed it (he could not recall the individual’s name exactly but his first name was [REDACTED]  and his last name was either [REDACTED ]. After they together observed the UFO, it turned and went back up the river and did not come back that shift. He and the other officer shared their observation with their peers who did not believe them.

The next evening he again was posted at the intake and observed the UFO return again. This time he didn’t call anyone until the UFO had traversed into the protected area and hovered above the protected area just north of the Reactor Building. He said it was roughly triangular in shape with a circle of rotating lights on the bottom. He could not hear any propulsion noise from the UFO. He believes that it was roughly 1/3 the size of the Reactor Building. Once the UFO hovered in the protected area. He called the security break room and most of the officers on shift observed the UFO.

The records also include reports submitted by the public to the NRC about UFO activity, and even alien technology.  The NRC gave the standard response to all of the letters sent in, that the NRC mission did not include the topics they were writing about.

The released documents can be seen below, in their entirety. They are unedited and appear exactly how they were received by The Black Vault from the NRC.