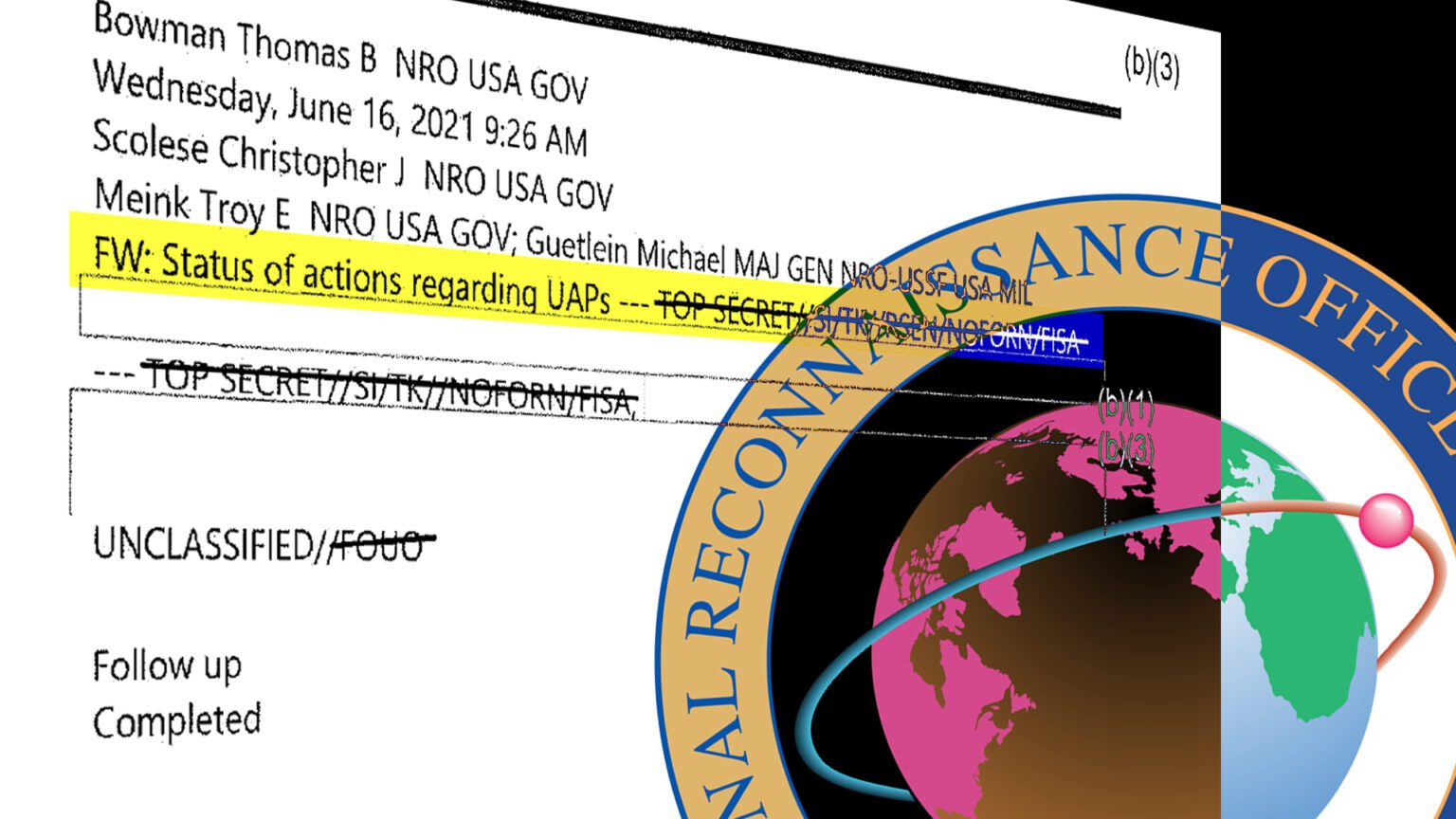 Just weeks ago, The Black Vault secured a partial release of the classified UAP report given to Congress on June 25, 2021. Now, newly released documents from the National Reconnaissance Office (NRO) shed light on their contributions to that report, and to the UAP research effort underway by numerous corners of the U.S. military, government and intelligence community.

The Freedom of Information Act (FOIA) request was submitted to the NRO by The Black Vault on July 22, 2021. It was given NRO FOIA Case F-2021-00164, and zeroed in on the email box of the Director of the NRO, Christopher Scolese.

Specifically, it sought the following:

The request sought after all e-mails and any attachments on both the unclassified and classified levels.

The result was a small stack of documents, most of which at the TOP SECRET level. The majority of what was released was an email with the subject, “Status of actions regarding UAPs”, sent June 9, 2021, just weeks before The Black Vault’s FOIA request was filed.

The email was written by Thomas B. Bowman, who was revealed within the released documents as the official NRO “Point of Contact” or POC for efforts tied to the UAP Task Force. This email, originally classified at the Top Secret level, was sent to Director Scolese, but also to Dr. Troy E. Meink, NRO Principal Deputy Director, and Major General Michael A. Guetlein, NRO Deputy Director.

This email broke down numerous pieces of information, and here are some of the highlights.

First, it broke down “three efforts” that Bowman wanted to highlight.

As seen here, it reveals for the first time that NROs contribution totaled four paragraphs of information within the seventeen page classified UAP report. The second “effort” is entirely redacted for national security reasons, but the third reveals that the DoD’s Inspector General (DoD/IG) interviewed several officers from the NRO Mission Integration Directorate (MID). This was tied to the DoD Inspector General’s evaluation into the handling and response to the UAP topic which was launched in May 2021.

Another portion of the email breaks down the NRO’s input to the classified UAP Task Force’s final report to Congress. It states the following: 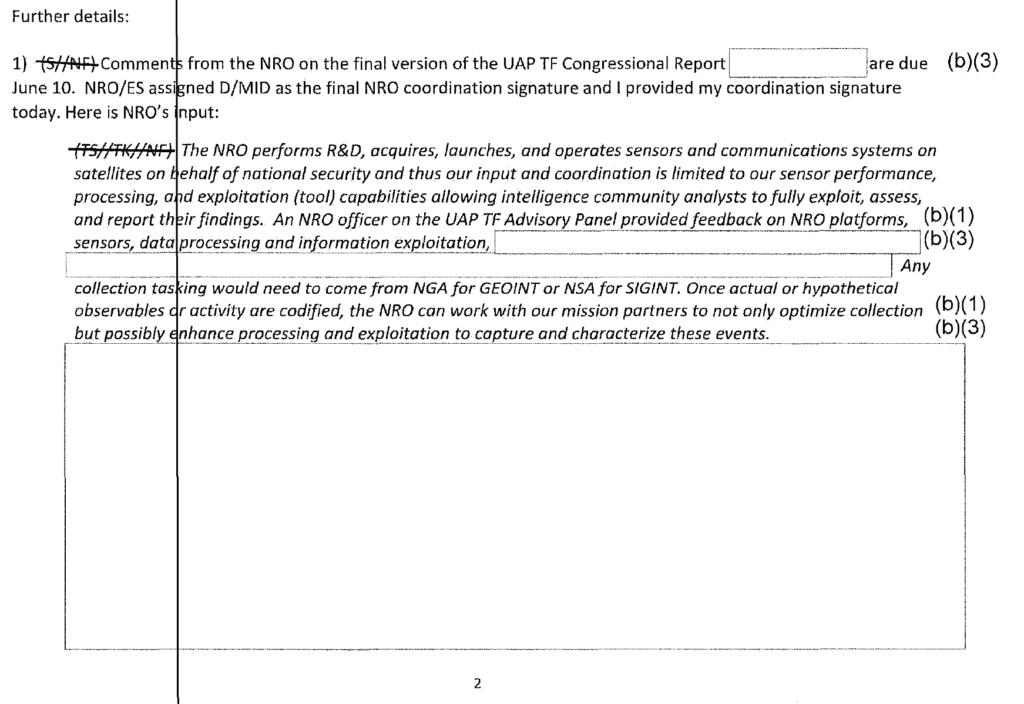 As seen with the above, the NRO had to sign off on the final version of the report thus approving their contributions, and this released email also revealed some of the once classified Top Secret contributions to the report.

Key takeaway, although easily assumed prior to this release, solidifies the involvement of the National Geospatial-Intelligence Agency (NGA) for GEOINT and the National Security Agency (NSA) for SIGINT, collected for the UAP research effort. The involvement of both agencies indicate that American spy satellites and intercepted communications all play a role in unraveling the UAP mystery.

Although a large portion of the email stays at the TOP SECRET and SECRET levels, and is heavily redacted as a result; another section that was not hidden does reveal small details on the DoD/IG UAP project, and the NRO’s future involvement.

As indicated with the above portion, the DoD/IG was going to task a “data call” to the NRO about two weeks after the email was written. This indicates much more involvement by the NRO in the DoD/IG’s effort, but it is unclear what the “data call” would entail.

Following this email were ten pages denied in toto, primarily withheld for national security reasons under exemption (b)(1). These pages may be the detail of that “data call” or something else entirely. It is only speculation on what is withheld.

The result of this request has spawned numerous cases filed by The Black Vault today, to build off this case. The results of those cases, when available, will be posted promptly.

The entire FOIA release is below.