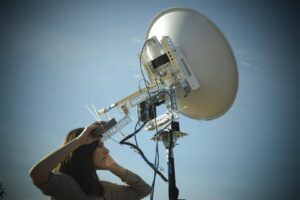 The SETI Institute will work with NASA’s Office of Planetary Protection (OPP) to provide technical reviews and recommendations, validate biological cleanliness on flight projects, provide training for NASA and its partners, as well as develop guidelines for implementation of NASA requirements, and disseminate information to stakeholders and the public. The role of OPP is to promote responsible exploration of the solar system by protecting both Earth and mission destinations from biological contamination.

“The depth of mission experience and breadth of knowledge on the SETI Institute team will help NASA meet the technical challenges of assuring forward and backward planetary protection on the anticipated path of human exploration from the Moon to Mars,” said Lisa Pratt, NASA’s planetary protection officer at NASA Headquarters in Washington.

Planetary protection preserves environments, as well as the science, ensuring verifiable scientific exploration for extraterrestrial life. Some of the upcoming NASA science missions that will be supported by this contract include the Mars 2020 and Europa Clipper missions, and preparations for NASA’s Mars Sample Return mission. In addition, future human spaceflight exploration under NASA’s Artemis program, such as the Gateway lunar orbital outpost, the Human Lander System, and Commercial Lunar Payload Services initiative, will be supported under this contract, as part of America’s Moon to Mars exploration approach.

The contract is a fixed-price indefinite-delivery/indefinite-quantity contract with a maximum award value of $4.7 million over a five-year period that began July 1.

“As we return to the Moon, look for evidence of past or present life on Mars and continue our missions of exploration and discovery in the solar system, planetary protection becomes an increasingly important component of mission planning and execution,” said Bill Diamond, president and chief executive officer of the SETI Institute. “We are proud to be NASA’s partner for this mission-critical function, protecting Earth from backward contamination, and helping ensure that the life we may find on other worlds, didn’t come from our own.”

NASA and the SETI Institute have worked together on planetary protection for more than a decade and have developed a strong relationship and core competency in this area. SETI Institute scientists have extensive experience in understanding microbial life and how it can affect missions, even in the extreme conditions of spaceflight and extraterrestrial environments. The SETI Institute also has been deeply involved on science teams for many NASA missions, including the Hubble Space Telescope, Curiosity, New Horizons, OSIRIS-REx, Kepler, and others.

Implementing effective and consistent planetary protection standards are more important than ever, as we increasingly venture into space, not only on missions governed by space agencies, but with projects run in conjunction with, and even wholly by, the commercial sector.

For more information about NASA’s Office of Planetary Protection, visit: