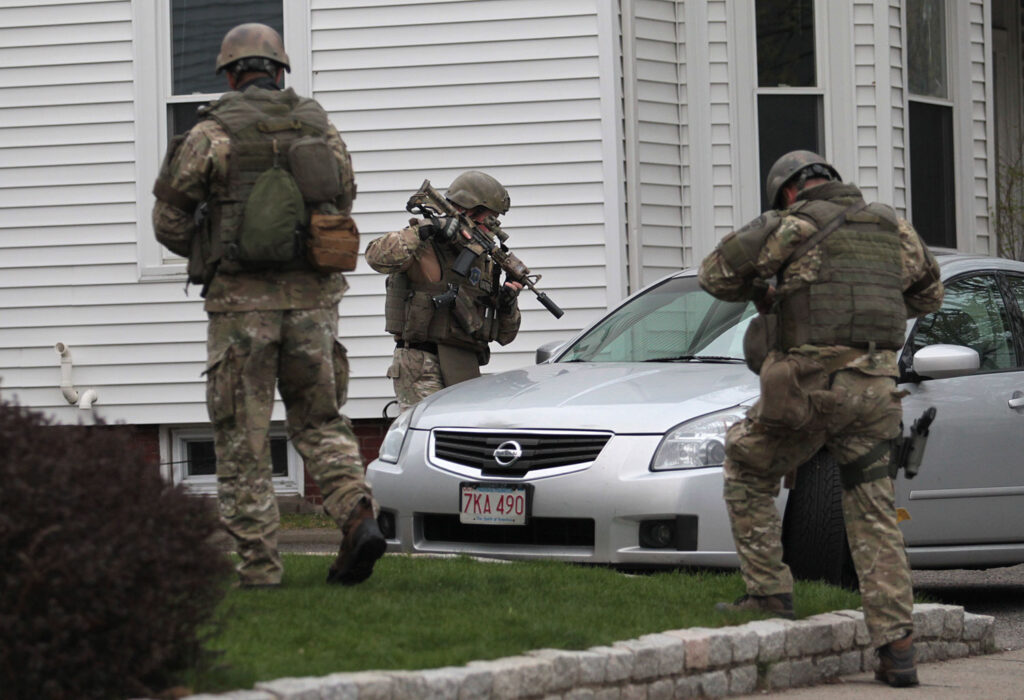 The following documents have been released regarding how the military can “help” during certain civilian disturbances.

Operation Garden Plot is a general U.S. Army and National Guard plan to respond to major domestic civil disturbances within the United States. The plan was developed in response to the civil disorders of the 1960s and is now under the control of the U.S. Northern Command (NORTHCOM). It provides Federal military and law enforcement assistance to local governments during times of major civil disturbances.

Domestic Support Operations, Department of the Army / United States Marines Corps, July 1993 [129 Pages, 1.3MB] – This manual provides the capstone doctrine for US Army and US Marine Corps domestic support operations. It also provides general information to civilian authorities at federal, state, and local levels involved in planning for and conducting such operations. It identifies linkages and defines relationships with federal, state, and local organizations
and with other services that have roles and responsibilities in domestic support operations.

Rex 84, short for Readiness Exercise 1984, was a classified scenario and drill developed by the United States federal government to detain large numbers of United States citizens deemed to be “national security threats”, in the event that the President declared a “State of National Emergency”. The plan was first revealed in detail in a major daily newspaper by reporter Alfonso Chardy in the July 5, 1987 edition of the Miami Herald. Possible reasons for such a roundup were reported to be widespread opposition to a U.S. military invasion abroad, such as if the United States were to directly invade Central America. To combat what the government perceived as “subversive activities”, the plan also authorized the military to direct ordered movements of civilian populations at state and regional levels, according to Professor Diana Reynolds.

March 10, 2009, Alabama MPs were sent from Ft. Rucker to the streets of Alabama to assist after a murder spree [14 Pages, 479k] – Although not directly related to Garden Plot, I feel that this set of documents is best suited here.  Many have theorized this incident was a violation of federal law.  In a FOIA request to the Army, I was able to obtain all documents associated with this incident, along with the memorandum of understanding between Ft. Rucker and the Sheriff’s department of the area.

Defense Support of Civil Authorities, 16 May 2008 [570 Pages, 41.2 MB] – Natural or man-made disasters and special events can be so demanding that local, tribal, state and non-military federal responders are temporarily overwhelmed by the situation. The Department of Defense (DOD) has a long history of supporting civil authorities in the wake of catastrophic events. When directed by the President or the Secretary of Defense (SecDef), United States Northern Command (USNORTHCOM} will respond quickly and effectively to the requests of civil authorities to save lives prevent human suffering, and mitigate great property damage. The Joint Strategic Capabilities Plan 2008 (JSCP) directs CDRUSNORTHCOM to prepare a plan to support the employment of Title 10 DOD forces providing Defense Support of Civil Authorities (DSCA) in accordance with (lAW) the National Response Framework (NRF), applicable federal law, DOD Directives (DODD), and other policy guidance including those hazards defined by the National Planning Scenarios that are not addressed by other JSCP tasked plans. DSCA is a subset of DOD civil support that is performed within the parameters of the NRF.

Civil Disturbances and Demonstrations: To Arrest or Not?, 28 February 1972 [57 Pages, 7.2MB] – Abstract: The central question is: What implications do recent mass arrests during civil disorders have for military forces? The criminal justice system has faltered during disorders with the result that the guilty were often acquitted and innocent persons were arrested. Arrests must be accomplished properly or the judicial process which follows will be adversely affected. Military policy emphasizes that civilian police should take custody of offenders. This is a proper policy; however, it has resulted in a paucity of guidance for military personnel to carry out this mission. The Army should: attach greater importance to the possibility that military personnel will be required to apprehend civilians; develop detailed procedures for the military to accomplish this mission; acquaint military personnel with offenses commonly committed in disorders, their authority to take action, and the degree of force permissible; train personnel in the care and preservation of evidence; develop a proper form for use in apprehending offenders; take photographs of offenders and the soldiers apprehending them; train teams in advance for mass arrest situation; and revise Army publications to implement these recommendations.