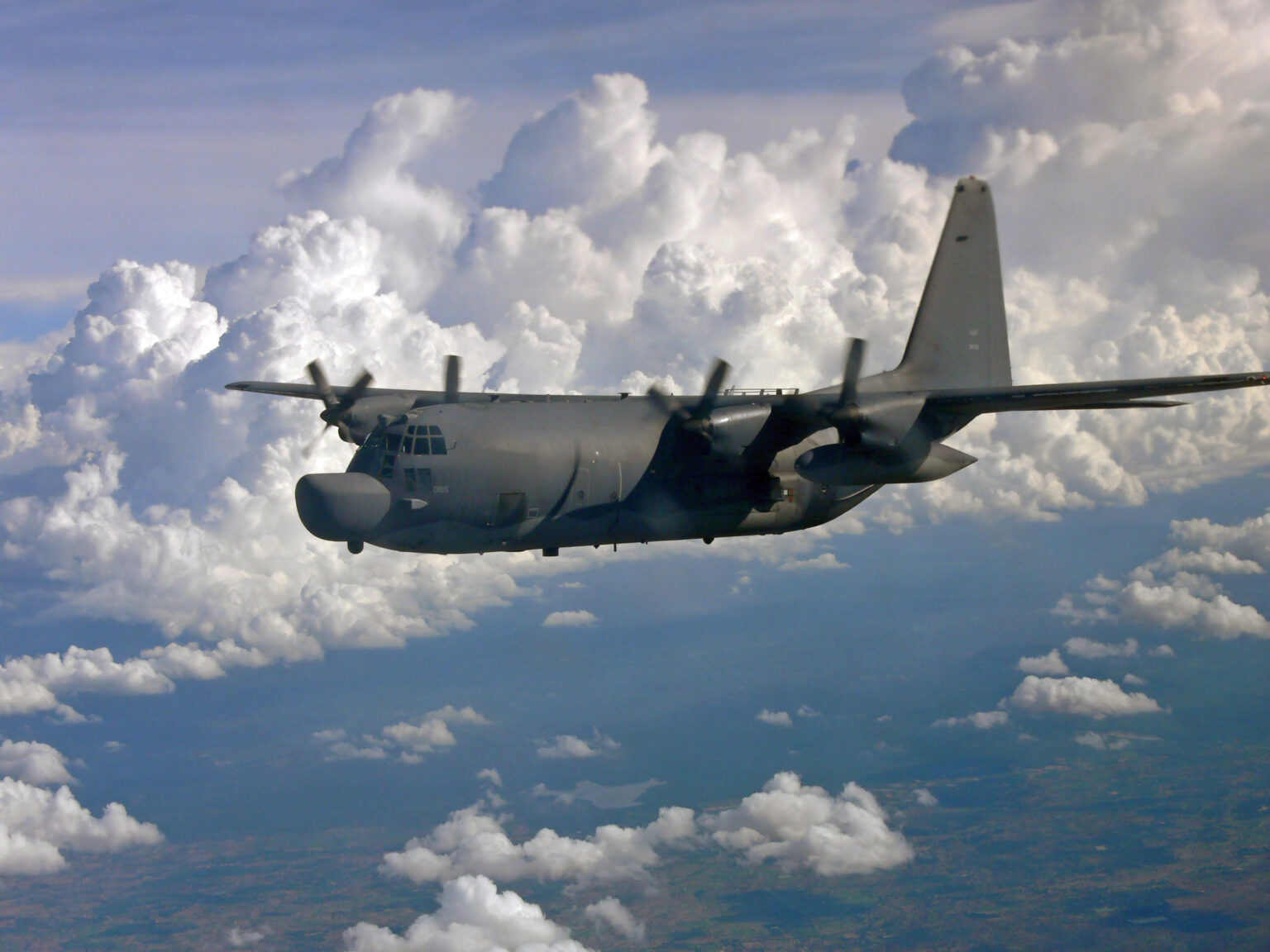 The Combat Talon was initially developed between December 1964 and January 1967 by Lockheed Air Services (LAS) at Ontario, California, as the result of a study by Big Safari, the USAF’s program office responsible for modification and sustainment of special mission aircraft. From it two highly classified test bed aircraft (originally serial no. 64-0506 and -0507, but with all numbers “sanitized” from the aircraft), were assigned to Project Thin Slice to develop a low level clandestine penetration aircraft suitable for Special Forces operations in Southeast Asia.

In 1964 Lockheed had modified six C-123B Providers for “unconventional warfare” under Project Duck Hook and then been tasked with adapting the C-130E when the Duck Hook aircraft proved inadequate for the newly launched MACV-SOG. The modifications under Thin Slice and its August 1966 successor Heavy Chain were code named Rivet Yard, and the four C-130Es came to be known as “Yards”. Discrete modification tests were conducted by the 1198th Operational Evaluation and Training Squadron, out of Area II of Norton AFB at San Bernardino, California, 30 miles east of Ontario.

As the Thin Slice aircraft were being developed, SOG requirements resulted in the procurement of 14 C-130Es in 1965 for similar modification. The first aircraft were production C-130Es without specialized equipment that were produced at Lockheed’s facility in Marietta, Georgia. Production airplanes were modified with the installation of the Fulton STARS (then ARS) system, at the rate of three aircraft per month. While awaiting installation of the ARS equipment, the C-130s were ferried to Greenville, South Carolina, for painting by Ling-Temco-Vought Electrosystems with a low-radar reflective paint that added 370 pounds to their weight. The velvet black and green scheme resulted in the aircraft being nicknamed “Blackbirds”. As installation was completed, the Blackbirds were returned to Ontario for installation of the electronics package, code-named Rivet Clamp. The aircraft modified became known as “Clamps” (two of the original 14, 64-0564 and -0565, were diverted to Heavy Chain in August 1966). The aircraft collectively were assigned the designation Combat Talon in 1967. (Source: WikiPedia)

The Praetorian STARShip: The Untold Story of the Combat Talon, December 2001 [508 Pages, 12.39MB]  – Jerry Thigpen’s study on the history of the Combat Talon is the first effort to tell the story of this wonderfully capable machine. This weapons system has performed virtually every imaginable tactical event in the spectrum of conflict and by any measure is the most versatile C-130 derivative ever produced. First modified and sent to Southeast Asia (SEA) in 1966 to replace theater unconventional warfare (UW) assets that were limited in both lift capability and speed the Talon I quickly adapted to theater UW tasking including infiltration and resupply and psychological warfare operations into North Vietnam. After spending four years in SEA and maturing into a highly respected UW weapons system the Joint Chief of Staff (JCS) chose the Combat Talon to lead the night low-level raid on the North Vietnamese prison camp at Son Tay. Despite the outcome of the operation the Talon I cemented its reputation as the weapons system of choice for long-range clandestine operations. In the period following the Vietnam War United States Air Force (USAF) special operations gradually lost its political and financial support which was graphically demonstrated in the failed Desert One mission into Iran. Thanks to congressional supporters like Earl Hutto of Florida and Dan Daniel of Virginia funds for aircraft upgrades and military construction projects materialized to meet the ever-increasing threat to our nation. Under the leadership of such committed hard-driven officers as Brenci Uttaro Ferkes Meller and Thigpen the crew force became the most disciplined in our Air Force. It was capable of penetrating hostile airspace at night in a low-level mountainous environment covertly to execute any number of unconventional warfare missions.