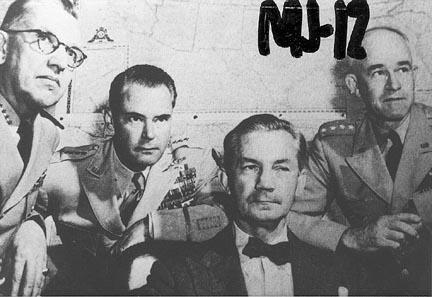 Majestic 12 is the purported code name of a secret committee of scientists, military leaders, and government officials, supposedly formed in 1947 by an executive order of U.S. President Harry S. Truman. The purpose of the committee was to investigate UFO activity in the aftermath of the Roswell incident – the purported crash of an alien spaceship near Roswell, New Mexico, in July 1947. This alleged committee is an important part of the UFO conspiracy theory of an ongoing government cover up of UFO information.

Majestic-12 FBI File – [24 Pages] Subject concerns an FBI inquiry into a possible unauthorized disclosure of classified information when a document marked “Top Secret” was made public. The investigation was closed after it was learned that the document was completely bogus.