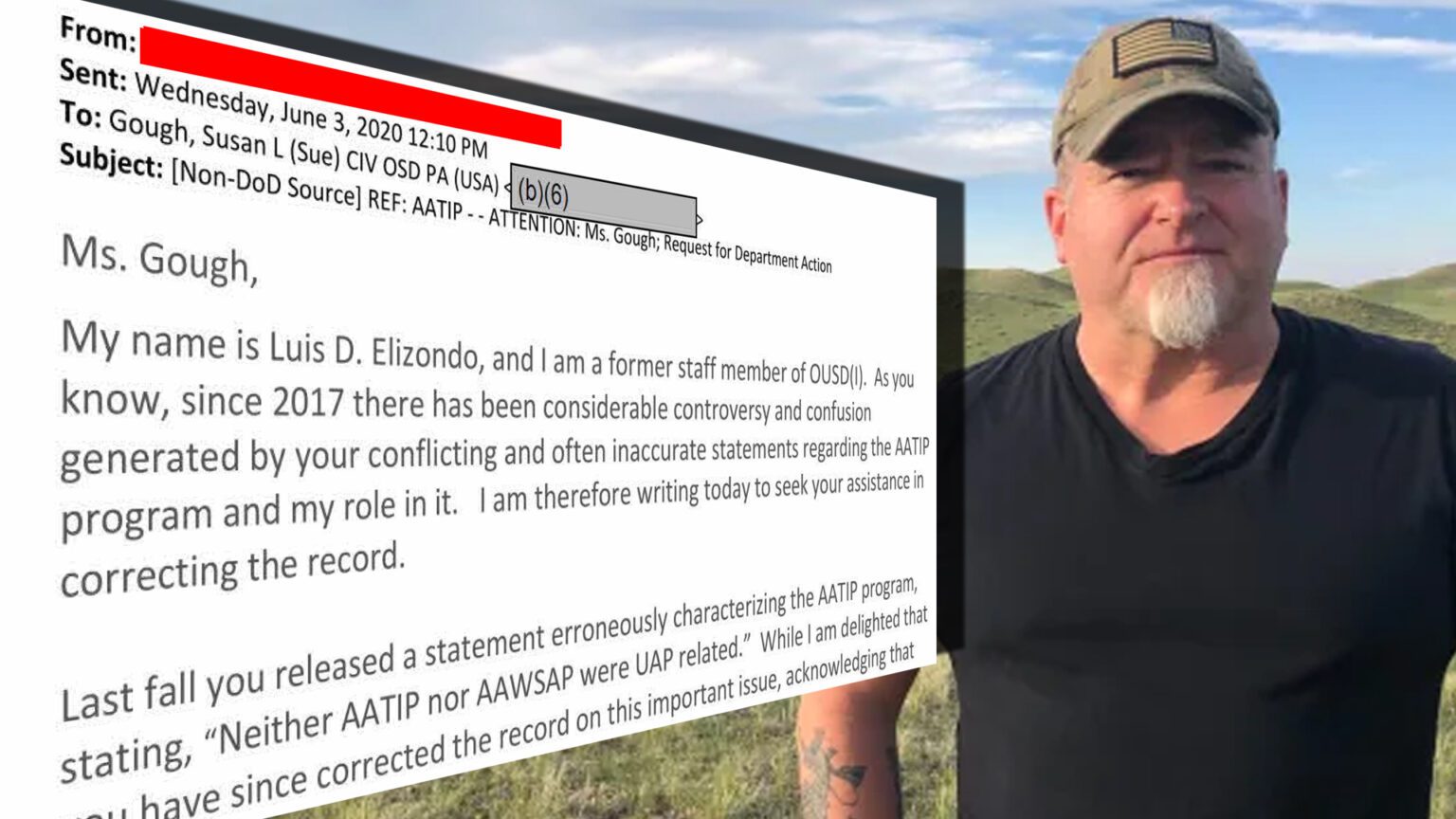 When Luis Elizondo was introduced to the world in October of 2017 shortly after his retirement from working inside the Pentagon, it is likely no one quite realized the full extent of the story that would unfold. Although Elizondo’s claims seemed extraordinary at the time; they were entirely believable to those that heard them. And as a result, they were profiled and highlighted by nearly every mainstream media outlet around the world at one time or another.

But then, in June of 2019, the Pentagon seemingly struck back at Elizondo’s claims that he ran a secretive Pentagon program known as the Advanced Aerospace Threat Identification Program (AATIP) to study UFOs.

“Mr. Elizondo had no responsibilities with regard to the AATIP program while he worked in OUSDI [the Office of Under Secretary of Defense for Intelligence], up until the time he resigned effective 10/4/2017,” they told Keith Kloor of The Intercept. (This was later changed to “no assigned responsibilities“.)

The Pentagon, whether being truthful or not, tried to instill doubt around Elizondo’s story. Although the attempt was futile to many, it was accepted by some, and that resulted in a harsh divide within the UFO conversation.

Whether you believed Elizondo, or the Pentagon, one fact has been recently revealed: Elizondo did not ignore the controversy and he did not stay quiet behind the scenes.

Instead, he wrote multiple letters directly to the Pentagon stating his case, and outlining what he described as “false accusations” on their part.

The first letter was sent four days after The Intercept wrote their scathing article about his claims. That e-mail, revealed via a Freedom of Information Act (FOIA) request by The Black Vault (OSD/JS FOIA 21-F-0938), showed that Elizondo sent a letter to the Office of Public Affairs (the identity of the recipient was redacted), as he outlined what he called his “final effort to avoid seeing this unfortunate situation escalate.”

Elizondo confirmed to The Black Vault after this e-mail was received via the FOIA, that it was his first attempt to address the situation with the DoD.

That two-page email is republished in full, here: 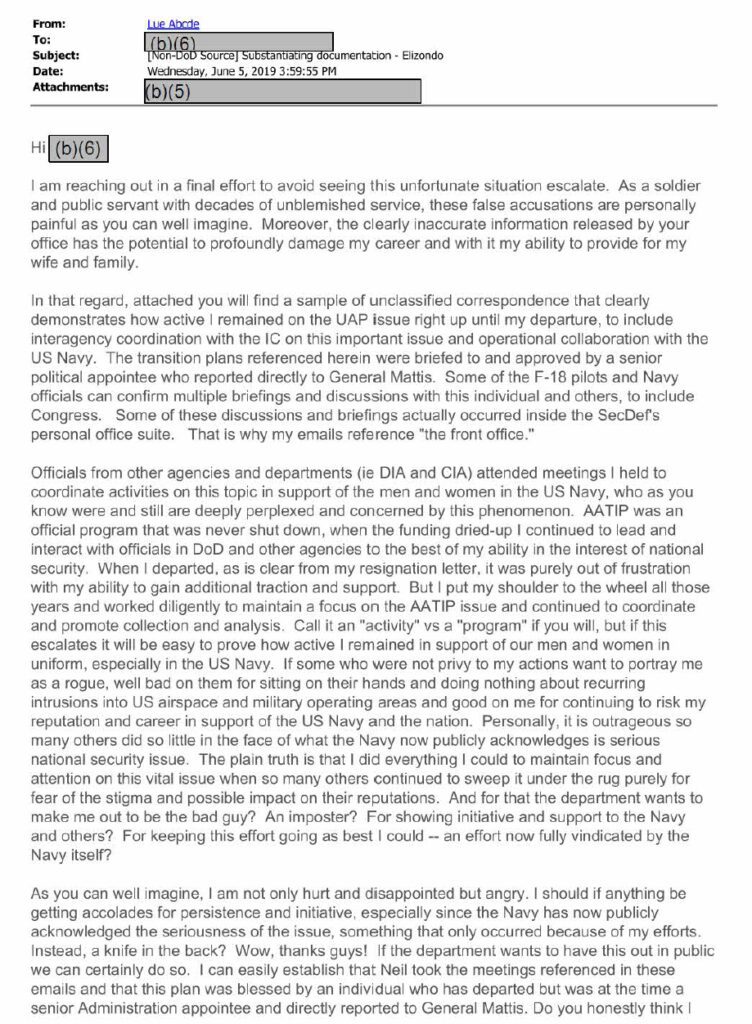 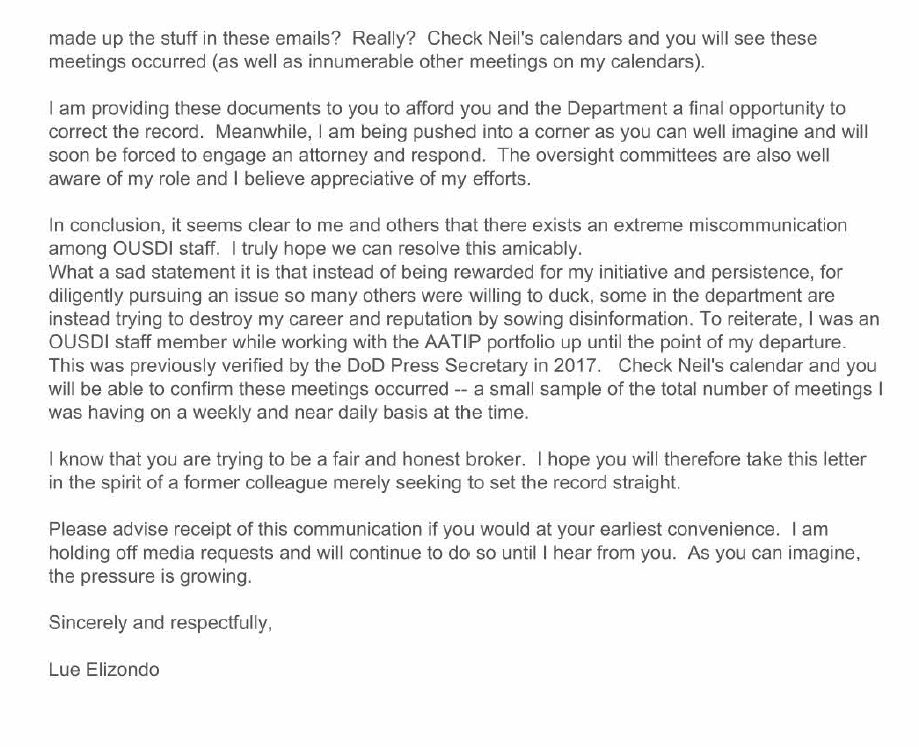 Note: As referenced in the letter above, and noted with the redacted “Attachments” line – there is additional information that was attached to this e-mail. It was not released in the FOIA request, and The Black Vault is currently working with the Pentagon to obtain the material. An appeal letter is being written if the FOIA office does not release a copy of the attachments. The Black Vault has also contacted Mr. Elizondo for the attachments. Should permission be granted on that front to release them, they will also be added here. This story will be updated if they are released in a timely manner from either party. Since there is no indication how long that process will take, The Black Vault is publishing this article without them until the situation changes.

The second e-mail that was revealed via FOIA was written just about a year after the first. This letter was previously published in October of 2021 by OpenMinds.tv Journalist Alejandro Rojas.

In an email to Pentagon spokesperson Susan Gough in 2020, @LueElizondo provided a list of people who could confirm his role w/ #AATIP. According to Elizondo, she never responded. I wonder if the Pentagon ever called anyone on the list? 🤔 Via #FOIA: https://t.co/N0tFvn4n5q

That was also obtained via The Black Vault’s FOIA request, but oddly, the redactions of some of the names, and titles, were different. This email is reproduced, in full, below. Note: The red redaction was put on by The Black Vault to protect Elizondo’s personal e-mail address which was released by OSD: 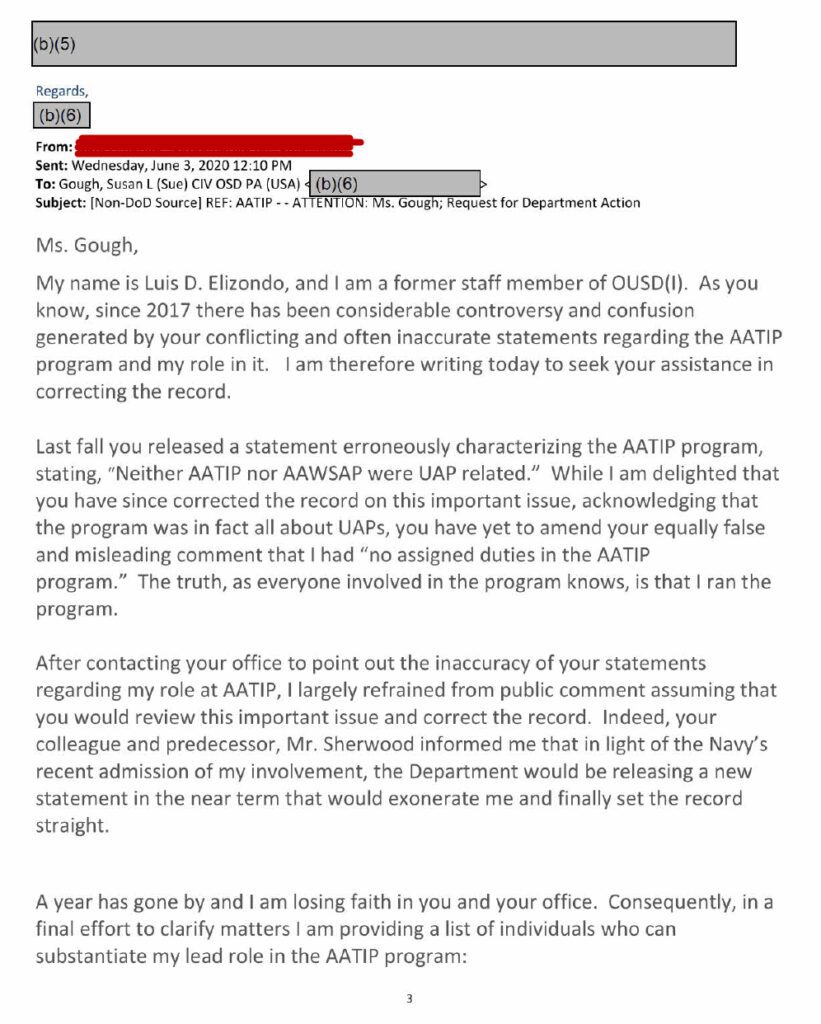 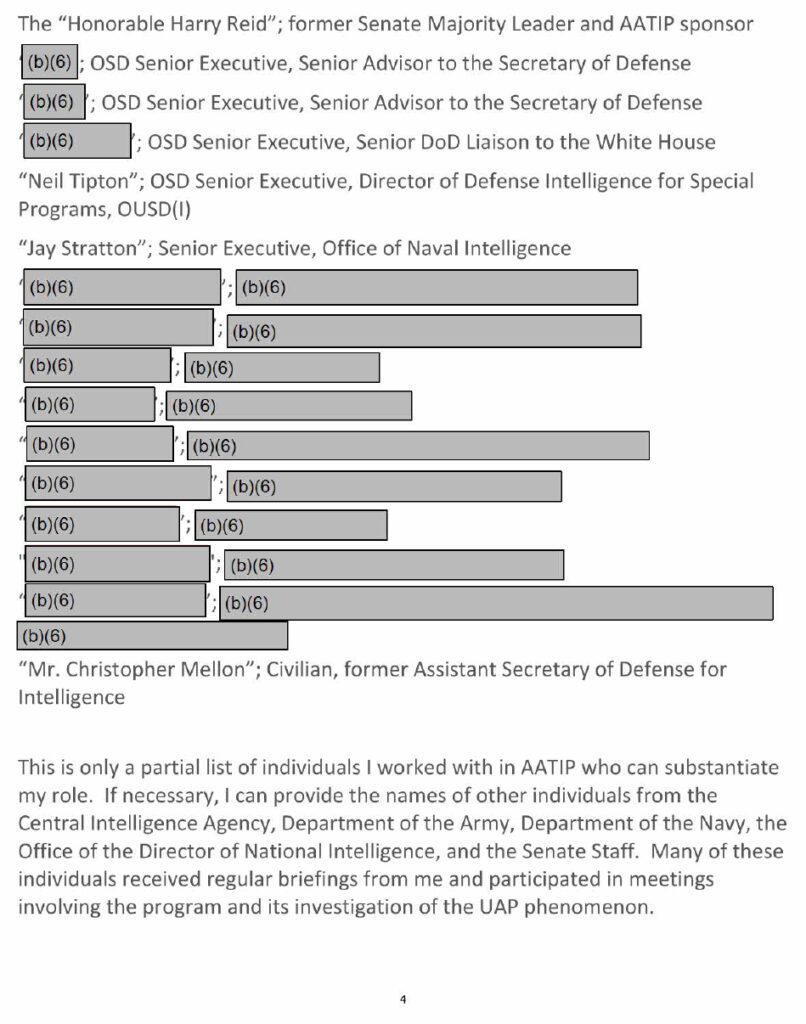 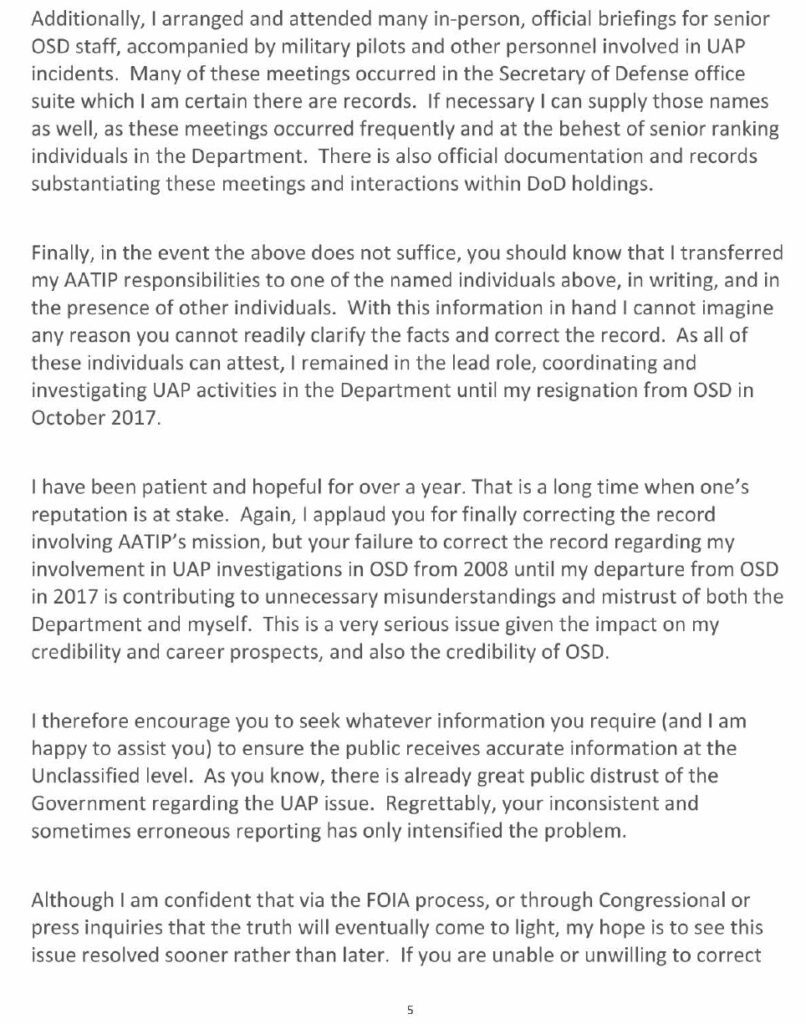 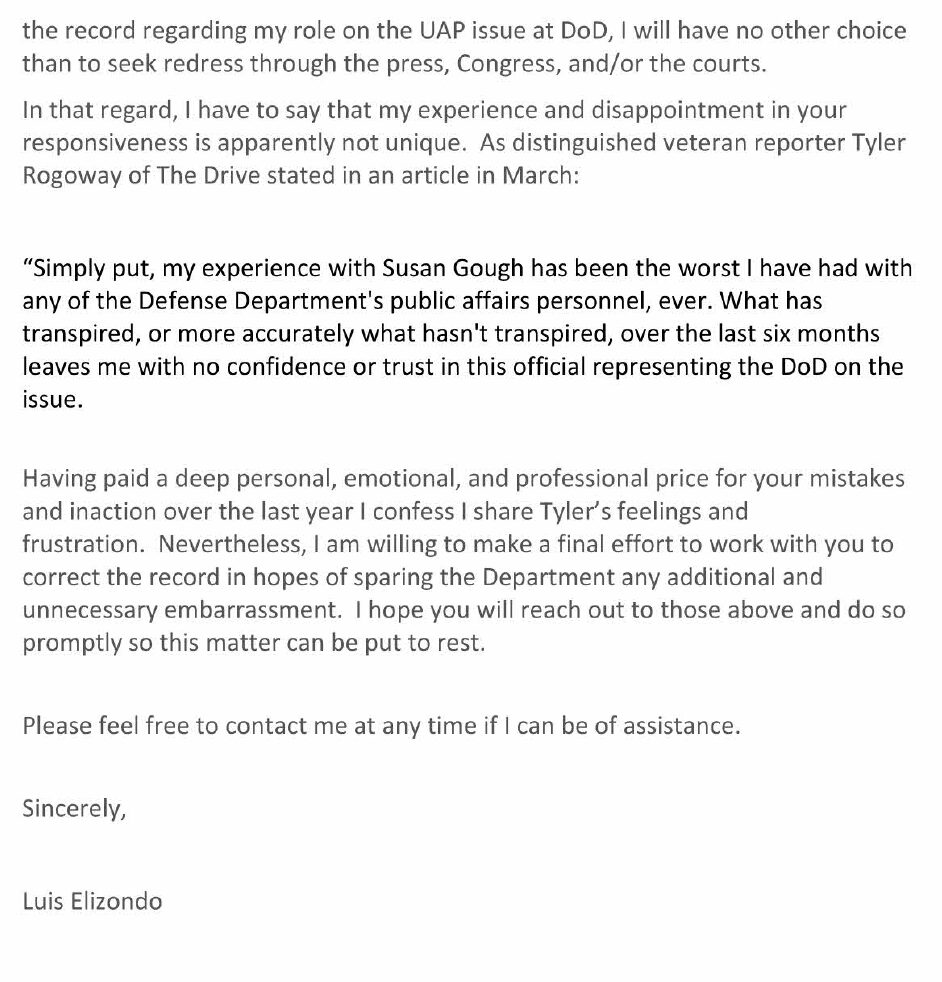 The above document is the version released to The Black Vault, but as previously noted, the version Rojas got and posted on Twitter in 2021, revealed much different usage of redactions.

You can see the comparison below:

Note: Jay Stratton’s last name was redacted by Rojas prior to release. The Black Vault chose not to redact his, or any other name, released since their names have been known and written about prior by The Black Vault.

There is no clear reason for the difference in redactions, especially since the FOIA releases were within about five months from each other, and released by the same office.

Elizondo confirmed to The Black Vault that no response was ever received by the Pentagon to either letter.