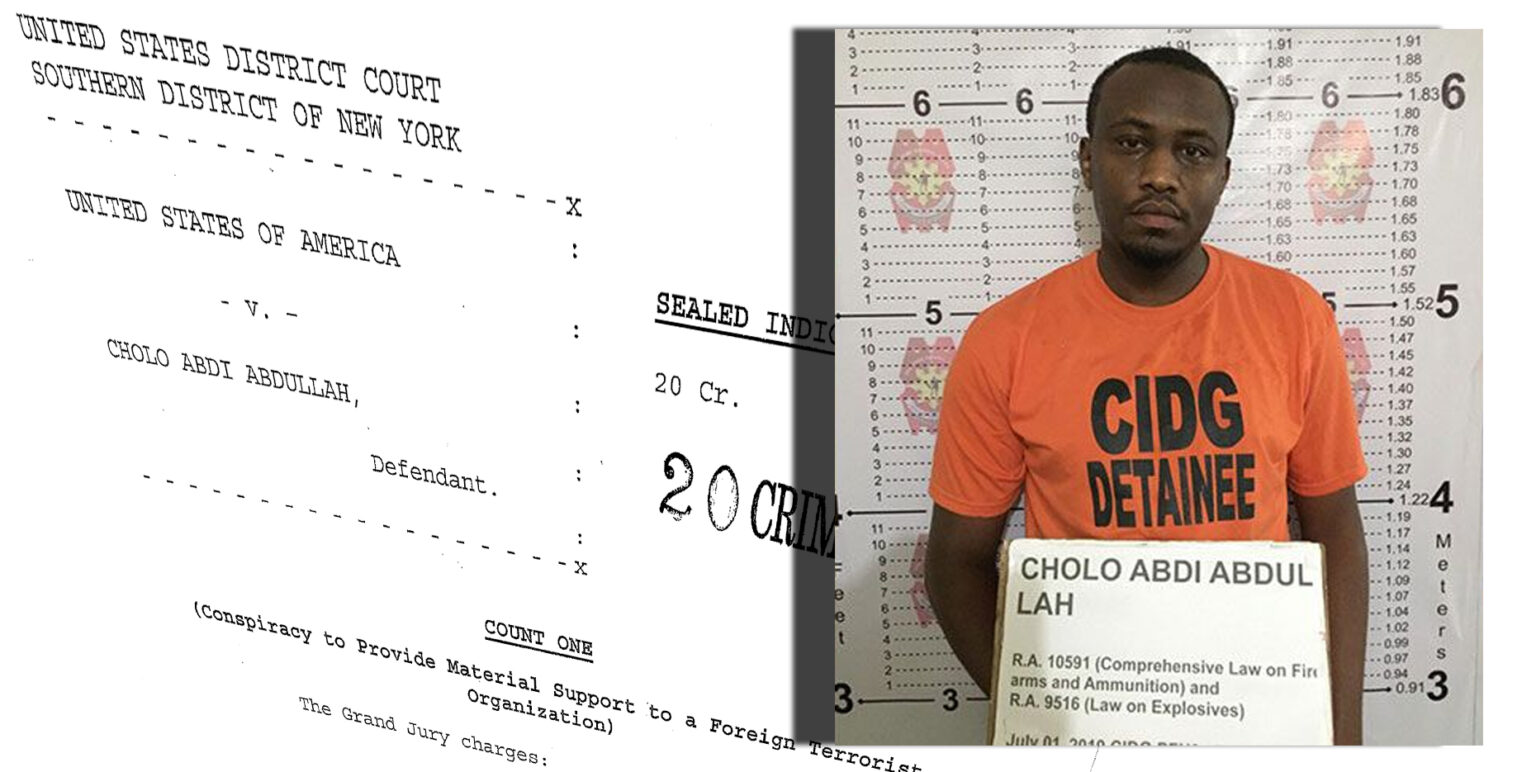 On December 16, 2020, the Department of Justice unsealed the indictment charging Cholo Abdi Abdullah. You can find their announcement archived below, along with the indictment.

The Department of Justice announced the unsealing of an indictment charging Cholo Abdi Abdullah with six counts of terrorism-related offenses arising from his activities as an operative of the foreign terrorist organization al Shabaab, including conspiring to hijack aircraft in order to conduct a 9/11-style attack in the United States.  Abdullah was arrested in July 2019 in the Philippines on local charges, and was subsequently transferred on Dec. 15, 2020 in connection with his deportation from the Philippines to the custody of U.S. law enforcement for prosecution on the charges in the indictment.  Abdullah was transported from the Phillippines to the United States yesterday, and is expected to be presented today before Magistrate Judge Robert W. Lehrburger in Manhattan federal court.  The case is assigned to United States District Judge Analisa Torres.

“This case, which involved a plot to use an aircraft to kill innocent victims, reminds us of the deadly threat that radical Islamic terrorists continue to pose to our nation.  And it also highlights our commitment to pursue and hold accountable anybody who seeks to harm our country and our citizens.  No matter where terrorists who plan to target Americans may be located, we will seek to identify them and bring them to justice,” said Assistant Attorney General for National Security John C. Demers.  “We owe a debt of gratitude to the detectives, agents, analysts, and prosecutors who are responsible for this defendant’s arrest.”

“As alleged, Cholo Abdi Abdullah, as part of a terrorist plot directed by senior al Shabaab leaders, obtained pilot training in the Philippines in preparation for seeking to hijack a commercial aircraft and crash it into a building in the United States,” said Acting Manhattan U.S. Attorney Audrey Strauss.  “This chilling callback to the horrific attacks of September 11, 2001, is a stark reminder that terrorist groups like al Shabaab remain committed to killing U.S. citizens and attacking the United States.  But we remain even more resolute in our dedication to investigating, preventing, and prosecuting such lethal plots, and will use every tool in our arsenal to stop those who would commit acts of terrorism at home and abroad.  Thanks to the outstanding investigative work of the New York Joint Terrorism Task Force, and the FBI’s global partnerships with law enforcement agencies around the world, Abdullah’s plot was detected before he could achieve his deadly aspirations, and now he faces federal terrorism charges in a U.S. court.”

“Nearly 20 years after the 9/11 terrorist attacks, there are those who remain determined to conduct terror attacks against United States citizens. Abdullah, we allege, is one of them,” said FBI Assistant Director-in-Charge William F. Sweeney Jr. “He obtained a pilot’s license overseas, learning how to hijack an aircraft for the purpose of causing a mass-casualty incident within our borders. Fortunately, the exceptional work by the men and women assigned to the many agencies that comprise the FBI’s New York JTTF have, once again, disrupted a threat to our communities.”

“As alleged in the federal indictment against him, Cholo Abdi Abdullah had obtained pilot training and begun plotting a terrorist attack against a target in the United States,” said NYPD Commissioner Dermot Shea.  “But the outstanding work of our NYPD detectives and federal agents of the FBI’s New York Joint Terrorism Task Force, along with all of our law enforcement partners, put an end to those plans and ensured that no one would be harmed.”

As alleged in the Indictment,[1] unsealed today in Manhattan federal court:

The charges in the Indictment unsealed today arise out of a coordinated scheme by the terrorist organization Harakat al-Shabaab al-Mujahideen, commonly known as “al Shabaab,” to target Americans both at home and abroad.  Al Shabaab, which has sworn allegiance to al Qaeda and serves as al Qaeda’s principal wing in East Africa, is responsible for numerous deadly terrorist attacks, including attacks that have claimed American lives.  Recently, al Shabaab has embarked on a string of terrorist attacks as part of an operation purportedly in response to the United States’ decision to move its embassy in Israel to Jerusalem, which the group has dubbed “Operation Jerusalem Will Never be Judaized.”  In particular, these terrorist attacks perpetrated by al Shabaab include an attack on Jan. 15, 2019, at a hotel in Nairobi, Kenya, which resulted in the deaths of approximately 21 people, including a U.S. national and survivor of al Qaeda’s 9/11 attack on the World Trade Center in New York, New York; a Sept. 30, 2019, attack on a U.S. military facility in Somalia; and a Jan. 5, 2020, attack on another U.S. facility in Kenya, in which three Americans were killed.

As alleged in the Indictment, Abdullah was an al Shabaab operative who participated in a plot to hijack commercial aircraft and crash them into a building in the United States.  Beginning in 2016, at the direction of a senior al Shabaab commander who was responsible for, among other things, planning the 2019 Nairobi hotel attack, Abdullah traveled to the Philippines and enrolled in a flight school there (the “Flight School”), for the purpose of obtaining training for carrying out the 9/11-style attack.  Between 2017 and 2019, Abdullah attended the Flight School on various occasions and obtained pilot’s training, ultimately completing the tests necessary to obtain his pilot’s license.

While Abdullah was obtaining pilot training at the Flight School, he also conducted research into the means and methods to hijack a commercial airliner to conduct the planned attack, including security on commercial airliners and how to breach a cockpit door from the outside, information about the tallest building in a major U.S. city, and information about how to obtain a U.S. visa.

Thanks to the extraordinary work of the FBI, law enforcement authorities foiled this plot.  Abdullah has remained in custody since his arrest on the local charges in the Philippines.

Abdullah, 30, of Kenya, is charged with conspiring to provide and providing material support to a designated foreign terrorist organization (al Shabaab), conspiring to murder U.S. nationals, conspiring to commit aircraft piracy, conspiring to destroy aircraft, and conspiring to commit acts of terrorism transcending national boundaries.  Abdullah faces a maximum sentence of life in prison, and a mandatory minimum sentence of 20 years in prison.  The specific penalties for each of the charges is reflected in the chart below.  The maximum potential sentence in this case is prescribed by Congress and is provided here for informational purposes only, as any sentencing of the defendant will be determined by a judge.

Assistant Attorney General Demers and Ms. Strauss praised the outstanding efforts of the FBI’s New York Joint Terrorism Task Force, which principally consists of agents from the FBI and detectives from the NYPD. They also thanked the FBI Hudson Valley office and the New York State Police.  Ms. Strauss also thanked the FBI Legal Attaché Offices in Nairobi, Kenya, and Manila, the Philippines; the Counterterrorism Section of the Department of Justice’s National Security Division; the Office of International Affairs of the Department of Justice’s Criminal Division; the U.S. Department of Defense; “…the Kenyan Directorate of Criminal Investigations, the Kenyan Anti-Terrorism Police Unit, the Joint Terrorism Task Force-Kenya, and the Kenyan Office of the Director of Public Prosecutions; and the Philippine National Police, Philippine Department of Justice, the Joint Terrorism Financial Investigations Group – Philippines, and Philippine Bureau of Immigration, for their assistance.

This prosecution is being handled by the Office’s Terrorism and International Narcotics Unit.  Assistant U.S. Attorneys David W. Denton, Jr., Sidhardha Kamaraju, and Elinor Tarlow are in charge of the prosecution, with assistance from the Counterterrorism Section of the National Security Division.

The charges in the Indictment are merely accusations, and the defendant is presumed innocent unless and until proven guilty.