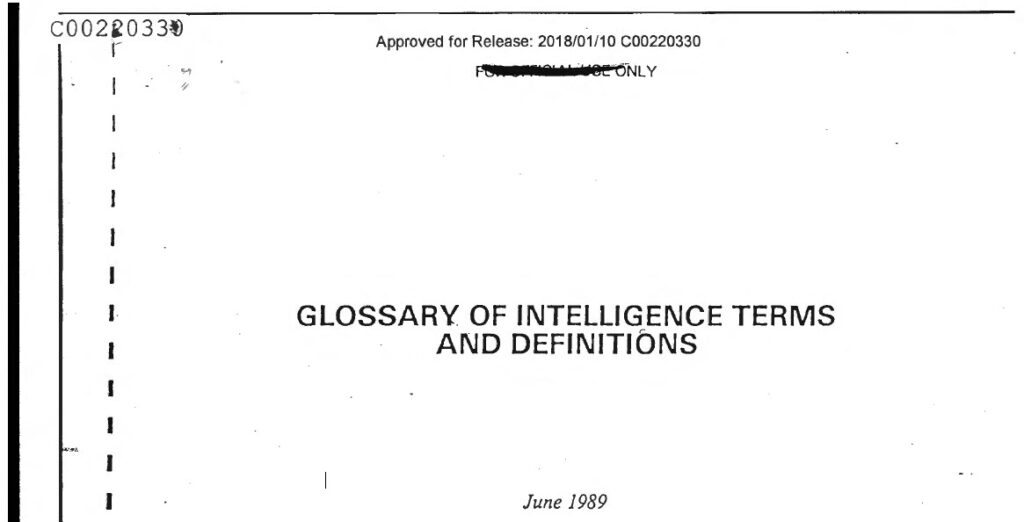 Glossary of Intelligence Terms and Definitions, Published June of 1989

The definitions in this revision of the Glossary have been devised by intelligence officers, not by philologists or semanticists. Thus, the terms and explanations contained herein are those that are commonly used and accepted by the Intelligence Community. Where some words may have several meanings within the intelligence context, a variety of definitions have been included.

Where agencies or departments may have slightly different interpretations of a term, such definitions have been so indicated. Where useful, terms have been cross-referenced to convey contextual alternatives or to enhance its meaning by identifying its role within a larger concept (e.g., intelligence cycle). Section II, Acronyms and Abbreviations, contains items commonly seen or heard in the intelligence arena.

The Glossary does not include organizationally peculiar terms and definitions, highly specialized or technical vocabulary, or words or details that would require the document to be classified at a higher level. Some definitions may not coincide precisely with those used elsewhere for departmental er legal purposes, especially where they support and clarify the language of a legal document. Terms and acronyms that are not found in this Glossary may be found in other glossaries and publications listed in Section III.

The Glossary is designed to be a reference and guidance document for those who are new to the intelligence field, and to ease interdepartmental communications and understanding both within the Intelligence Community and with other governmental agencies. It is hoped that it will contribute to language commonality throughout the intelligence field. Users are encouraged to submit proposed corrections, additions, and suggestions to the Intelligence Community Staff, Planning and Policy Office, for incorporation in future updates of this Glossary.