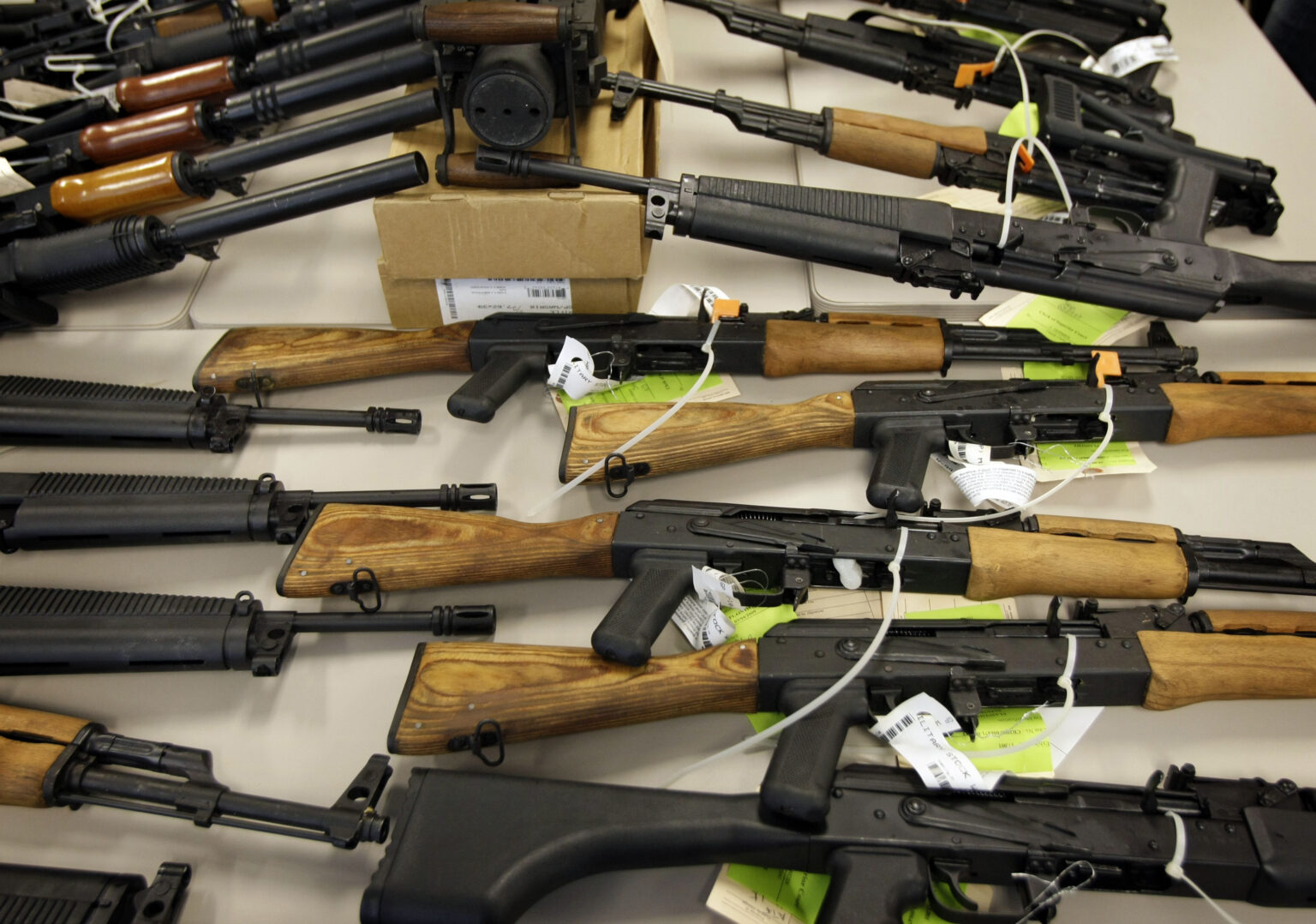 The Bureau of Alcohol, Tobacco, Firearms and Explosives (ATF) ran a series of “gunwalking” sting operations between 2006 and 2011. These operations were done under the umbrella of Project Gunrunner, a project intended to stem the flow of firearms into Mexico by interdicting straw purchasers and gun traffickers within the United States. “Gun walking” or “letting guns walk” was a tactic whereby the ATF “purposely allowed licensed firearms dealers to sell weapons to illegal straw buyers, hoping to track the guns to Mexican drug cartel leaders.”

The stated goal of allowing these purchases was to continue to track the firearms as they were transferred to higher-level traffickers and key figures in Mexican cartels, with the expectation that this would lead to their arrests and the dismantling of the cartels. The tactic was questioned during the operations by a number of people, including ATF field agents and cooperating licensed gun dealers. During Operation Fast and Furious, by far the largest “gunwalking” probe, the ATF monitored the sale of over 2,000 firearms, of which only 700 were recovered as of October 20, 2011. A number of straw purchasers have been arrested and indicted; however, as of October 2011, none of the targeted high-level cartel figures have been arrested.

Guns tracked by the ATF have been found at crime scenes on both sides of the Mexico–United States border, and the scene of the death of at least one U.S. federal agent, Border Patrol Agent Brian Terry. The “gunwalking” operations became public in the aftermath of Terry’s murder.  Dissenting ATF agents came forward to Congress in response. According to Humberto Benítez Treviño, former Mexican Attorney General and chair of the justice committee in the Chamber of Deputies, firearms trafficked by smugglers under the watch of the ATF have been found at numerous crime scenes in Mexico, including scenes where at least 150 Mexican civilians were maimed and killed.  As investigations have continued, the operations have become increasingly controversial in both countries, and diplomatic relations have been damaged as a result. (Source: WikiPedia)

Fast and Furious: The Anatomy of a Failed Operation

Fast and Furious: The Anatomy of a Failed Operation, Part 1 of 3 [514 Pages, 4.6 MB] – This report is the first of three completing the investigative work of the House Committee on Oversight and Government Reform and the Senate Committee on the Judiciary. This report chronicles the fundamentally flawed firearms trafficking case from the perspective of the United States Attorney’s Office and the Bureau of Alcohol, Tobacco, Firearms, and Explosives. Part two will look at the devastating failure of supervision and leadership by officials at Justice Department headquarters, principally within the Office of the Deputy Attorney General, and within the Criminal Division. Part three will address the unprecedented obstruction of the investigation by the highest levels of the Justice Department, including the Attorney General himself. Part two will be released shortly, and part three can only be prepared after the Justice Department fulfills its obligations to cooperate with the Congress and produce documents. Soon, the U.S. House of Representatives will commence legal proceedings to enforce its prerogatives following the June 27, 2012, vote holding Attorney General Eric H. Holder, Jr. in criminal and civil contempt.

Senator Chuck Grassley: “Officials in the Justice Department saw any number of warnings and some even had the gunwalking information right in front of them, yet nothing was done to stop it. Countless people may be murdered with these weapons, yet the Attorney General appears to be letting his employees slide by with little to no accountability. The Attorney General needs to make changes to ensure that department leadership provides oversight of the agencies they are tasked with supervising, instead of pointing fingers at somebody else.”

Senator Chuck Grassley, ranking member of the Judiciary Committee, has been investigating the government law enforcement strategy of allowing guns to “walk” across the Mexican border to drug traffickers for the past 18 months. He and his staff have obtained several key documents through their investigation. Links to key documents with a description of the importance of each follows here.

January 31, 2011, Letter from Senator Grassley to ATF [2 Pages, 0.2 MB] – Senator Grassley’s letter making clear that ATF whistleblowers had the right to talk to Congress and not be retaliated against.

April 13, 2011, Letter from Senator Grassley to DOJ regarding gun dealer emails [11 Pages, 1 MB] – This letter quoted and attached emails from a gun dealer who expressed concerns to what ATF had been asking him to do and, because he had “some very close friends that are US Border Patrol agents in southern AZ,” wanted reassurances that the guns he had been encouraged by ATF to sell wouldn’t “ever end up south of the border or in the hands of bad guys.” The emails show ATF assuring the gun dealer that ATF was monitoring the suspects, and organizing a visit of the Assistant U.S. Attorney to the gun dealer’s store to “put [him]at ease.” This gun dealer was not the main gun dealer in Fast and Furious, but corroborated that gun dealer’s testimony. Senator Grassley’s letter attaching these emails also asked, in light of these emails, if the Justice Department stood by its February 4, 2011, denial of gunwalking allegations.

May 2, 2011, Letter from DOJ to Senator Grassley [2 Pages, 0.3 MB] – The Justice Department’s response doubling down in its denials of ATF gunwalking.

June 15, 2011, testimony to the House in front of House Oversight and Government Reform Committee [5 Pages, 0.3 MB] – Senator Grassley’s testimony of his investigation to that point. Summarizes details about the underlying Fast and Furious case.

December 2, 2011, DOJ Letter to Senator Grassley and Chairman Issa – Retraction of DOJ’s February 4, 2011 Letter [4 Pages, 0.3 MB] – Letter finally withdrawing the Justice Department’s assertion that gunwalking had not taken place, ten months after its initial denial and seven months after its reiteration of the denial.

List of documents not produced by DOJ [2 Pages, 0.2 MB] – On June 21, 2012, White House press secretary Jay Carney stated, “[W]e have provided Congress every document that pertains to the operation itself.” This list indicates just a sampling of documents that the Justice Department has never produced but that investigators are either aware exist or have confidentially obtained copies of from whistleblowers.

Other Documents Relating to Fast and Furious and Project Gunrunner

Drug Violence Along the Southwest Border: Another American Punitive Expedition? March 16, 2011 [36 Pages, 0.7 MB] – Since 2005, the drug-related violence along the border with Mexico has steadily increased. The increasing crossover violence from the border is threatening our national security. The main variable associated with this increase in violence is the recent involvement of paramilitary organizations within organized crime and the drug cartels in Mexico. Many of these organizations are led by former Mexican Army officers with special operations and counter drug/terrorism training. In an effort to curb the growing border violence and its threat to our national security, President Obama announced in May 2010 that 1200 National Guard troops would be sent to the southwest border to support the border patrol and other law enforcement agencies. Although the U.S. military does not have the primary responsibility to secure our borders, the armed forces generally provide support to law enforcement and immigration authorities through the Posse Comitatus Act (PCA). The continued escalation in violence along the southwest border and its crossover into the U.S. will require an expanded role of our military mission on the southwest border. This mission may eventually expand as part of a coalition force to confront the forces of the drug cartel organizations.

Gun Trafficking and the Southwest Border 29 July 2009 [31 Pages, 0.4 MB] – According to the Department of Justice, the Bureau of Alcohol, Tobacco, Firearms and Explosives (ATF) is the lead federal agency responsible for stopping the illegal flow of firearms, or gun trafficking, from the United States to Mexico. ATF has developed a nationwide strategy to reduce firearms trafficking and violent crime by seeking to prevent convicted felons, drug traffickers, and juvenile gang members from acquiring firearms from gun traffickers. These criminals often acquire firearms from persons who are otherwise not prohibited from possessing firearms, or by buying firearms from corrupt federal firearms licensees (FFLs) who sell firearms off-the-books in an attempt to escape federal regulation. ATF also reports that Mexican drug trafficking organizations (DTOs) are increasingly sending enforcers across the border to hire surrogates (straw purchasers) who buy several “military-style” firearms at a time from FFLs. The DTOs also reportedly favor pistols chambered to accommodate comparatively large cartridges that are capable of piercing through armor vests usually worn by law enforcement officers, and magazines capable of holding more than 10 rounds of ammunition. Less frequently, but no less troubling to law enforcement, the DTOs have also sought .50 caliber sniper rifles that are capable of penetrating bullet-proof glass and lightly armored vehicles. ATF reports that there are around 6,700 FFLs in the United States operating in the Southwest border region of Texas, New Mexico, Arizona, and California. By inspecting the firearms transfer records that FFLs are required by law to maintain, ATF investigators are often able to trace crime guns from their domestic manufacturer or importer to the first retail dealer that sold those firearms to persons in the general public, generating vital leads in criminal investigations.

A Review of ATF’s Operation Fast and Furious and Related Matters, September 2012 – Office of the Inspector General, Oversight and Review Division [514 Pages, 4.6 MB]

Southwest Border Violence: Issues in Identifying and Measuring Spillover Violence, 24 Aug 2010 [47  Page, 0.8 MB] – There has been a recent increase in the level of drug trafficking-related violence within and between the drug trafficking organizations in Mexico. This violence has generated concern among U.S. policy makers that the violence in Mexico might spill over into the United States. Currently, U.S. federal officials deny that the recent increase in drug trafficking-related violence in Mexico has resulted in a spillover into the United States, but they acknowledge that the prospect is a serious concern.

Two ATF “Fast and Furious” Whistleblowers Settle Cases [1 Page, 0.2 MB] – Larry Alt and Olindo J. “Lee” Casa, two of the employees at the Bureau of Alcohol, Tobacco and Firearms (ATF) who blew the whistle on “Operation Fast and Furious” and subsequently filed retaliation claims with the Office of Special Counsel (OSC), successfully resolved their cases through OSC’s mediation program.