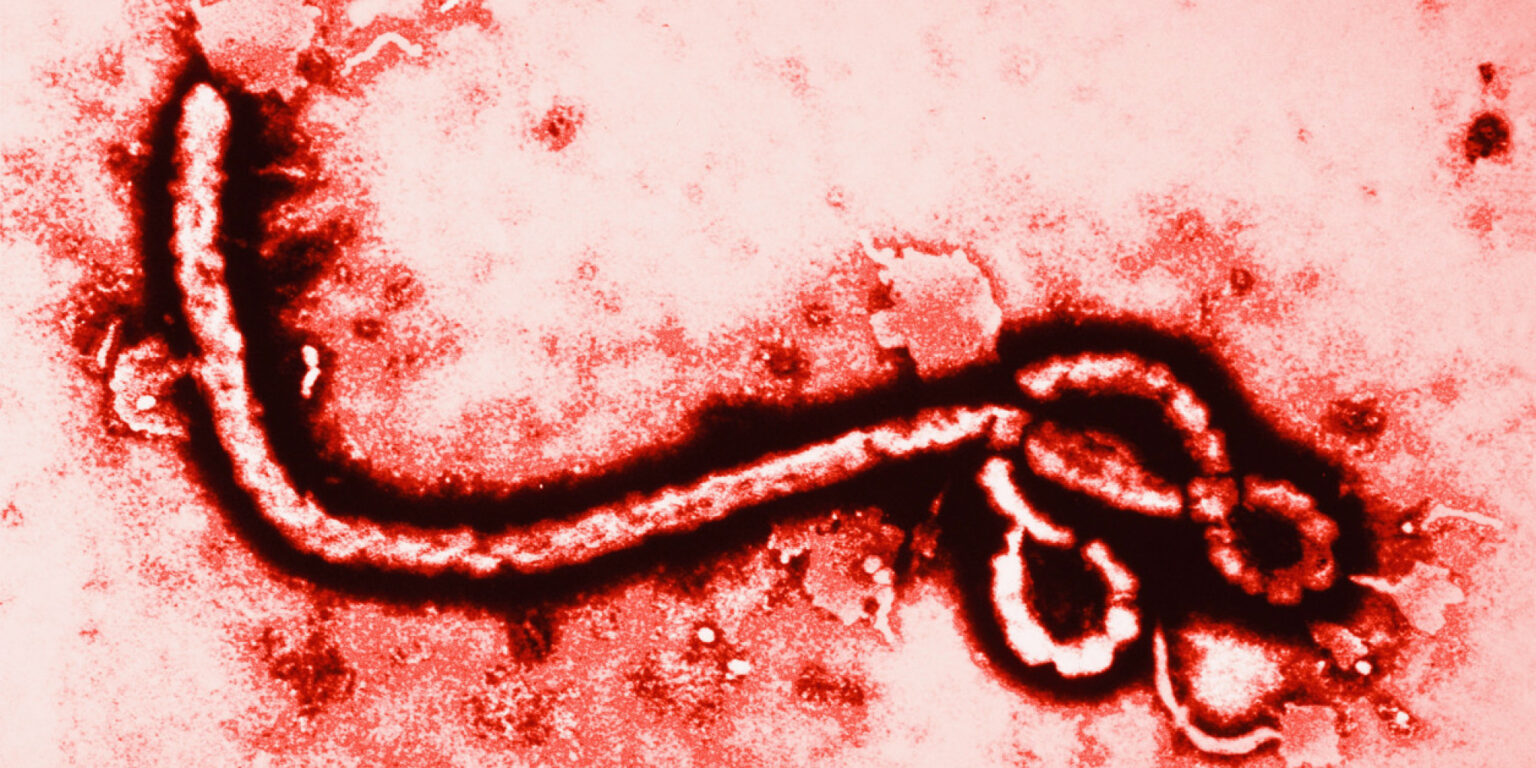 Ebola virus disease (EVD), Ebola hemorrhagic fever (EHF) or simply Ebola is a disease of humans and other mammals caused by an ebolavirus. Symptoms start two days to three weeks after contracting the virus, with a fever, sore throat, muscle pain and headaches. Typically, vomiting, diarrhea and rash follow, along with decreased function of the liver and kidneys. Around this time, affected people may begin to bleed both within the body and externally. Death, if it occurs, is typically 6 to 16 days from the start of symptoms and is often due to low blood pressure due to fluid loss.

The following are documents obtained from the United States Military and Government on Ebola. They are listed in chronological order.

Lethal Experimental Infections of Rhesus Monkeys by Aerosolized Ebola Virus., 15 November 1994 [ 37 Pages, 1.22MB ] – The potential of aerogenic infection by Ebola virus was established by using a head-only exposure aerosol system. Virus-containing droplets of 0.8-1.2 urn were generated and administered into the respiratory tract of rhesus monkeys via inhalation. Inhalation of viral doses as low as 400 plaque-forming units of virus caused a rapidly fatal disease in four to five days. The illness was clinically identical to that reported for parenteral virus inoculation, except for the occurrence of subcutaneous and venipuncture site bleeding and serosanguinous nasal discharge. Immunocytochemistry revealed cell-associated Ebola virus antigens present in airway epithelium, alveolar pneumocytes, and macrophages in the lung and pulmonary lymph nodes; extracellular antigen was present on mucosal surfaces of the nose, oropharynx, and airways. Aggregates of characteristic filamentous virus were present within type I pneumocytes, macrophages, and air spaces of the lung by electron microscopy. Demonstration of fatal aerosol transmission of this virus in monkeys reinforces the importance of taking appropriate precautions to prevent its potential aerosol transmission to humans.

Field Investigations of an Outbreak of Ebola Hemorrhagic Fever, Kikwit, Democratic Republic of the Congo, 1995: Arthropod Studies, 1999 [ 8 Pages, 0.1MB ] – During the final weeks of a 6-month epidemic of Ebola hemorrhagic fever in Kikwit, Democratic Republic of the Congo, an extensive collection of arthropods was made in an attempt to learn more of the natural history of the disease. A reconstruction of the activities of the likely primary case, a 42-year-old man who lived in the city, indicated that he probably acquired his infection in a partly forested area 15 km from his home. Collections were made throughout this area, along the route he followed from the city, and at various sites in the city itself. No Ebola virus was isolated, but a description of the collections and the ecotopes involved is given for comparison with future studies of other outbreaks.

Towards a Vaccine Against Ebola Virus, 2003 [ 14 Pages, 0.4MB ] – Ebola virus infection causes hemorrhagic fever with high mortality rates in humans and nonhuman primates. Currently, there are no vaccines or therapies approved for human use. Outbreaks of Ebola virus have been infrequent, largely confined to remote locations in Africa and quarantine of sick patients has been effective in controlling epidemics. In the past, this small global market has generated little commercial interest for developing an Ebola virus vaccine. However, heightened awareness of bioterrorism advanced by the events surrounding September 11, 2001, concomitant with knowledge that the former Soviet Union was evaluating Ebola virus as a weapon, has dramatically changed perspectives regarding the need for a vaccine against Ebola virus. This review takes a brief historic look at attempts to develop an efficacious vaccine, provides an overview of current vaccine candidates and highlights strategies that have the greatest potential for commercial development.

Marburg and Ebola Viruses as Aerosol Threats, 2004 [ 7 Pages, 5.78MB ] – Ebola and Marburg viruses are the sole members of the genus Filovirus in the family Filoviridae. There has been considerable media attention and fear generated by outbreaks of filoviruses because they can cause a severe viral hemorrhagic fever (VHF) syndrome that has a rapid onset and high mortality. Although they are not naturally transmitted by aerosol, they are highly infectious as respirable particles under laboratory conditions. For these and other reasons, filoviruses are classified as category A biological weapons. However, there is very little data from animal studies with aerosolized filoviruses. Animal models of filovirus exposure are not well characterized, and there are discrepancies between these models and what has been observed in human outbreaks. Building on published results from aerosol studies, as well as a review of the history, epidemiology, and disease course of naturally occurring outbreaks, we offer an aerobiolgist’s perspective on the threat posed by aerosolized filoviruses.

Ebola Virus: New Insights into Disease Aetiopathology and Possible Therapeutic Interventions, 21 September 2004 [ 25 Pages, 0.4MB ] – Ebola virus (EBOV) gained public notoriety in the last decade largely as a consequence of the highly publicised isolation of a new EBOV species in a suburb of Washington, DC, in 1989, together with the dramatic clinical presentation of EBOV infection and high case-fatality rate in Africa (near 90% in some outbreaks), and the unusual and striking morphology of the virus. Furthermore, there are no vaccines or effective therapies currently available. Progress in understanding the origins of the pathophysiological changes that make EBOV infections of humans so devastating has been slow, primarily because these viruses require special containment for safe research. However, an increasing understanding of the mechanisms of EBOV pathogenesis, facilitated by the development of new tools to elucidate critical regulatory elements in the viral life cycle, is providing new targets that can be exploited for therapeutic interventions. Notably, identifying factors triggering the haemorrhagic complications that characterise EBOV infections led to the development of a strategy to modulate coagulopathy; this therapeutic modality successfully mitigated the effects of EBOV haemorrhagic fever in nonhuman primates. This review summarises our current understanding of EBOV pathogenesis and discusses various approaches to therapeutic intervention based on our current understanding of how EBOV produces a lethal infection.

Virus-Like Particles Exhibit Potential as a Pan-Filovirus Vaccine for Both Ebola and Marburg Viral Infections, 12 January 2005 [ 11 Pages, 0.4MB ] – A safe and effective pan-filovirus vaccine is highly desirable since the filoviruses Ebola virus (EBOV) and Marburg virus (MARV) cause highly lethal disease typified by unimpeded viral replication and severe hemorrhagic fever. Previously, we showed that expression of the homologous glycoprotein (GP) and matrix protein VP40 from a single filovirus, either EBOV or MARV, resulted in formation of wild-type virus-like particles (VLPs) in mammalian cells. When used as a vaccine, the wild-type VLPs protected from homologous filovirus challenge. The aim of this work was to generate a multi-agent vaccine that would simultaneously protect against multiple and diverse members of the Filoviridae family. Our initial approach was to construct hybrid VLPs containing heterologous viral proteins, of EBOV and MARV, and test the efficacy of the hybrid VLPs in a guinea pig model. Our data indicate that vaccination with GP was required and sufficient to protect against a homologous filovirus challenge, as heterologous wild-type VLPs or hybrid VLPs that did not contain the homologous GP failed to protect. Alternately, we vaccinated guinea pigs with a mixture of wild-type Ebola and Marburg VLPs. Vaccination with a single dose of the multivalent VLP vaccine elicited strong immune responses to both viruses and protected animals against EBOV and MARV challenge. This work provides a critical foundation towards the development of a pan-filovirus vaccine that is safe and effective for use in primates and humans.

Development of Treatment Strategies to Combat Ebola and Marburg Viruses, 02 February 2006 [ 11 Pages, 0.4MB ] – Ebola and Marburg viruses are emerging/re-emerging pathogens that pose a significant threat to human health. These naturally occurring viral infections frequently cause a lethal hemorrhagic fever in humans and nonhuman primates. The disastrous consequences of infection with these viruses have been pursued as potential biological weapons. To date, there are no therapeutic options available for the prophylaxis or treatment of infected individuals. The recognition that Ebola and Marburg viruses may be exploited as biological weapons has resulted in major efforts to develop modalities to counter infection. In this review, select technologies and approaches will be highlighted as part of the critical path for the development of therapeutics to ameliorate the invariably devastating outcomes of human filoviral infections.

How Ebola and Marburg Viruses Battle the Immune System, July 2007 [ 13 Pages, 1.03MB ] – The filoviruses Ebola and Marburg have emerged in the past decade from relative obscurity to serve now as archetypes for some of the more intriguing and daunting challenges posed by such agents. Public imagination is captured by deadly outbreaks of these viruses and reinforced by the specter of bioterrorism. As research on these agents has accelerated, it has been found increasingly that filoviruses use a combination of familiar and apparently new ways to baffle and battle the immune system. Filoviruses have provided thereby a new lens through which to examine the immune system itself.

Managing Potential Laboratory Exposure to Ebola Virus by Using a Patient Biocontainment Care Unit, June 2008 [ 8 Pages, 0.2MB ] – In 2004, a scientist from the US Army Medical Research Institute of Infectious Diseases (USAMRIID) was potentially exposed to a mouse-adapted variant of the Zaire species of Ebola virus. The circumstances surrounding the case are presented, in addition to an update on historical admissions to the medical containment suite at USAMRIID. Research facilities contemplating work with pathogens requiring Biosafety Level 4 laboratory precautions should be mindful of the occupational health issues highlighted in this article.

Drug Targets in Infections With Ebola and Marburg Viruses, 2009 [ 11 Pages, 4.61MB ] – The development of antiviral drugs for Ebola and Marburg viruses has been slow. To date, beyond supportive care, no effective treatments, prophylactic measures, therapies or vaccines are approved to treat or prevent filovirus infections. In this review, we examine the current treatments available to administer care for filovirus infection, the potential therapeutic targets that can be used for filovirus drug development, and the various drug targeting techniques used against filoviruses.