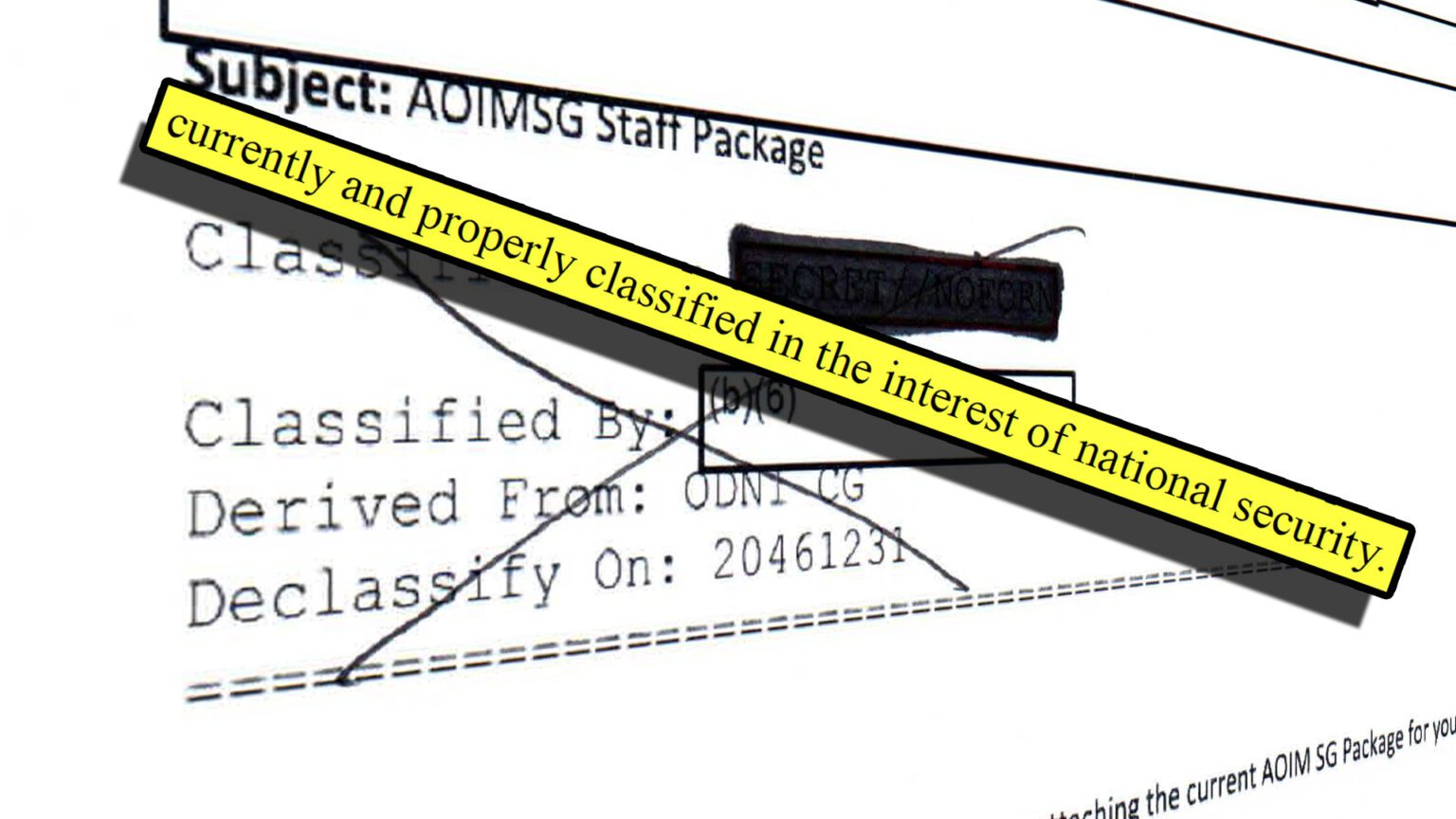 Want to know more about the UFO office within the Pentagon? Well, when it comes to the last rendition of it anyway, the Department of Defense (DoD) does not want you to know much.

In fact, they just denied key pages in understanding the office known as the Airborne Object Identification and Management Synchronization Group, or AOIMSG, along with redacting numerous other pages hiding crucial details of the effort.

Although the office has since been restructured and renamed, in November of 2021, the Deputy Secretary of Defense announced the creation of the AOIMSG.

“The presence of unidentified aerial phenomena (UAP) in Special Use Airspace (SUA), designated in accordance with 14 CFR Part 73, represents a potential safety of flight risk to aircrews and raises potential national security concerns,” said the November 23, 2021 memorandum by Deputy Secretary of Defense, Kathleen Hicks. “Accordingly, I direct the Under Secretary of Defense for Intelligence and Security (USD(I&S) to establish the Airborne Object Identification and Management Synchronization Group (AOIMSG) to synchronize efforts across the Department and with other Federal departments and agencies to detect, identify and attribute objects of interests in SUA, and to assess, and as appropriate, mitigate any associated threats to safety of flight and national security.”

With this memo, the AOIMSG was established, along with the Airborne Object Identification and Management Executive Council (AOIMEXEC) to provide oversight and direction.

On the same day this memo was released to the public, The Black Vault filed Freedom of Information Act (FOIA) case 22-F-0224 which asked for the release of each document related to the AOIMSG and AOIMEXEC up until that point, which would include everything created during the establishment of both groups.

Specifically, it asked for, “all records pertaining to the Airborne Object Identification and Management Synchronization Group (AOIMSG) and the Airborne Object Identification and Management Executive Council (AOIMEXEC).” The request asked to, “…include, but not be limited to, letters, memos, emails sent to/from related parties (I agree that the FOIA officer use their best discretion on who’s emails to search), mission statements, PowerPoint presentations, draft documents about the creation of these groups, etc.,” as responsive to the case.

The result, according to the DoD, was that 50 pages were discovered as responsive to the above, however, 23 pages were, “…currently and properly classified in the interest of national security,” and were denied in full. The FOIA release letter, signed by the Chief FOIA Officer of the DoD, detailed why that portion of the information was withheld in full:

The remaining 27 pages were released, however most of the substance within those records was heavily redacted.

The main core of what was released consisted of emails about the creation of the AOIMSG, referred to within as the “AOIMSG Package for USD(I&S).” Most of the names were redacted for privacy reasons, though a few were not, one of which appears to be the first time one DoD official was connected to the UAP conversation.

Mark R. Elliot, who serves as the Director for Technical Collection within the Office of the Under-Secretary of Defense for Intelligence, was revealed in the list of names and was not redacted in the release.

According to Elliot’s LinkedIn profile, he is an, “Innovative senior executive with extensive experience managing complex and dynamic intelligence and cyber security organizations.”

Another name revealed has been released before, though he was easily overlooked in that past release.

Matthew Cummings, who according to his biography posted at the Potomac Officer’s Club, serves as the Senior Advisor for MASINT, GEOINT, and Special Programs at Office of the Secretary of Defense U.S. Department of Defense (DOD).

Cummings’ name first appeared in a FOIA case filed by The Black Vault, as released by the DoD, Office of the Inspector General, in August of 2021.

His name has come up again, but this time with a bit more detail.

Cummings’ full name and title appear in this new FOIA release in one of the classification blocks, which usually has the names within the “classified by” section redacted.

His titled as listed in the classification block indicates that Cummings serves as Elliot’s deputy within “Technical Collection”.

In addition to this, Cummings also appears numerous times within the e-mails, though yet again, details are sparse.

It is revealed Cummings likely played a role in the early implementation of the AOIMSG, along with Elliot, but to what extent is unknown.

Along with some new names to chase after through FOIA, another page was released that does not appear to have been in the public domain before.

The FOIA release included the June 24, 2021, and November 23, 2021, memorandums by the Deputy Secretary of Defense previously mentioned in this article, however, the latter came with a “Staff Summary Sheet” which broke down the various components within the DoD that appear to have all played a role and/or offered coordination and feedback about the establishment of the AOIMSG.

(Note: The “OGCI” acronym is unknown at the time of writing this article. “OGC” is the DoD’s Office of General Counsel, however, “OGCI” seems to not be listed in any acronym list or reference guide so it can be defined here.)

Within the “Summary” section of the sheet, the “Purpose” and “Background” to the establishment of the AOIMSG is listed, but entirely redacted are the “Discussion” and “Recommendation” sections.

At the bottom, attachments are also listed, which details a few records released to The Black Vault, but also cites a “Draft Implementation Guidance (for reference only)” document, which appears to be one of the unknown number of records withheld.

Although The Black Vault has asked the DoD for more details on the extent of what was withheld, no response has been received at the time of publishing this article, though the file names of the release may give an indication.

The FOIA release consisted of 7 .pdf files, one of which was the FOIA release letter (and another the original request, not shown in the screenshot below), while the remainder were the various documents available for download below.

These files are listed for reference:

The Black Vault has filed an appeal in an attempt to get the withheld records released, and the results will be published, when available. In addition, a new case was filed for records dated past the November 24, 2021 December 17, 2021, cut off date of the above request (DoD corrected their date shortly after publishing this article).