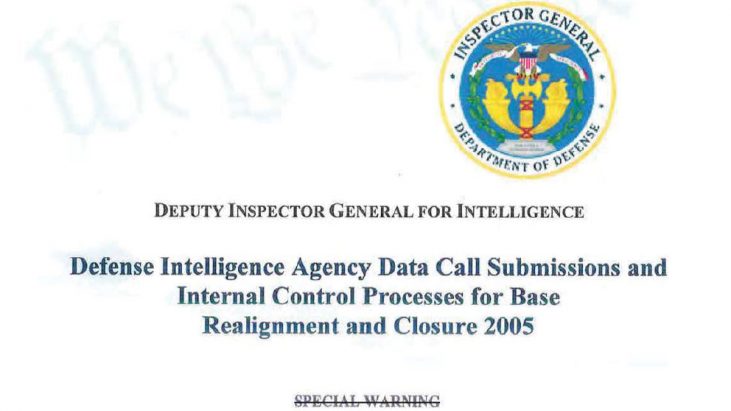 Defense Intelligence Agency Data Call Submissions and Internal Control Processes for Base Realignment and Closure 2005, May 13, 2005

BRAC 2005 is the formal process outlined in Public Law l 01-51 0, “Defense Base Closure and Realignment Act of 1990,” as amended, under which the Secretary of Defense may realign or close military installations inside the United States and it’s territories. As part of BRAC 2005, the Under Secretary of Defense for Acquisition, Technology, and Logistics issued, “Transformation Through Base Realignment and Closure (BRAC 2005) Policy Memorandum One-Policy,
ResponsibilitiesJ and Procedures,” April 16, 2003, which stated that the DoD Office of Inspector General would review the accuracy ofBRAC data and the certification process.

The BRAC 2005 process was mandated for the United States and its territories and was divided into the following data cal ls- capacity analysis, supplemental capacity, Military value, Cost of Base Realignment Actions, Joint Process Action Team Criterion Number 7, and scenario specific. The Intelligence agencies’ collection process was divided into the following data calls- capacity analysis and Military value, and scenario specific.

The Army Did Not Implement Effective Controls To Maintain Visibility and Accountability of Iraq Train and Equip Fund Equipment, September 14, 2016