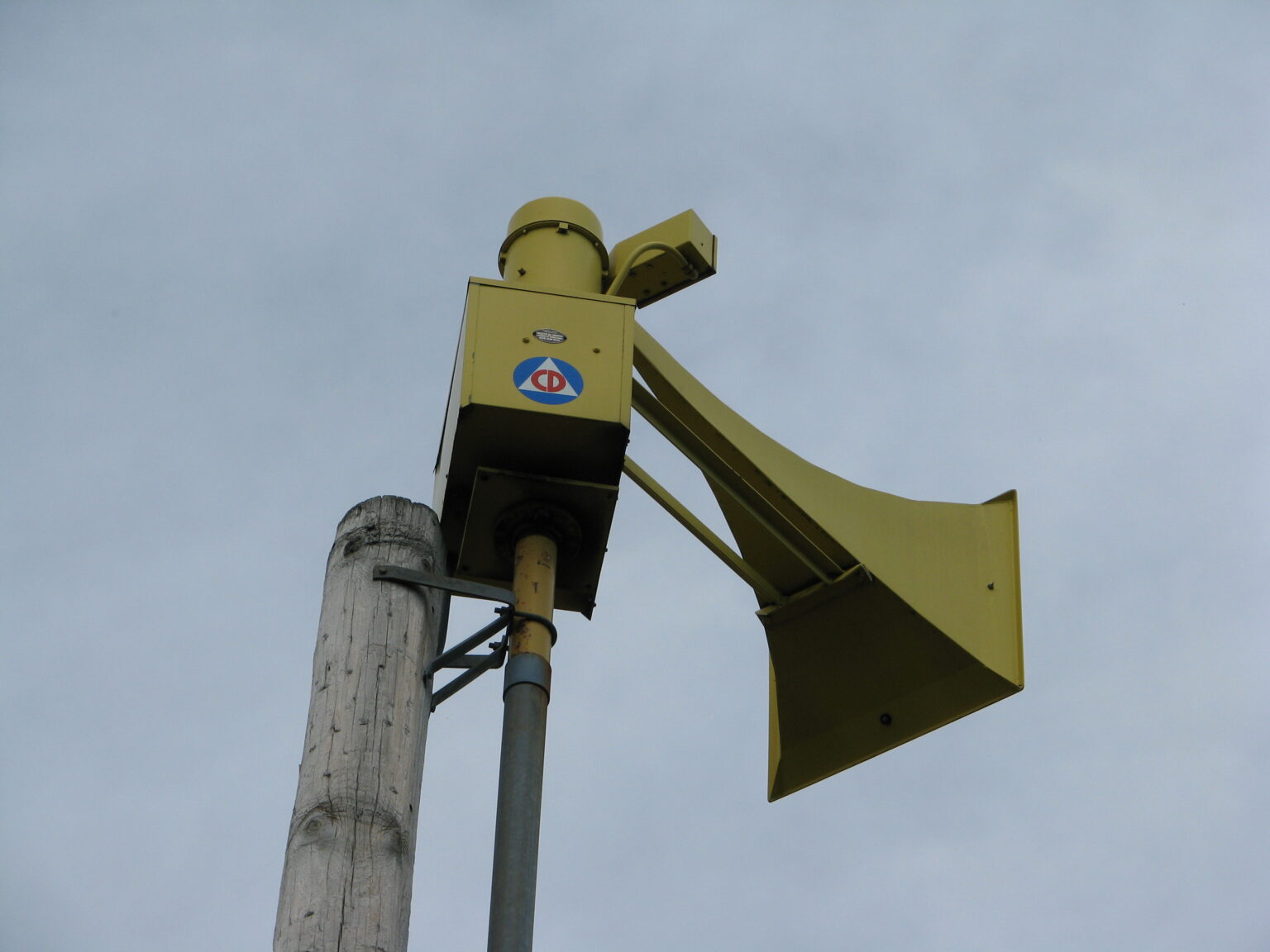 Civil defense or civil protection is an effort to protect the citizens of a state (generally non-combatants) from military attack. It uses the principles of emergency operations: prevention, mitigation, preparation, response, or emergency evacuation, and recovery. Programmes of this sort were initially discussed at least as early as the 1920s and were implemented in many countries, but only became widespread in the USA after the threat of nuclear weapons was realised.

Since the end of the Cold War, the focus of civil defense has largely shifted from military attack to emergencies and disasters in general. The new concept is described by a number of terms, each of which has its own specific shade of meaning, such as crisis management, emergency management, emergency preparedness, contingency planning, emergency services, and civil protection.

In some countries, civil defense is seen as a key part of “total defense”. For example in Sweden, the Swedish word totalförsvar refers to the commitment of a wide range of resources of the nation to its defense – including to civil protection. (Source: Wikipedia)

Analysis of the U.S. and Soviet Crisis Management Experiences. Technical Report, 1 Oct 1978-28 Sep 1979[372 Pages, 14.9mb] – This report presents the first systematic analysis of the outcomes of U.S. and Soviet crises from 1966 through 1978. The analyses are designed to identify general trends and patterns in these data. The information developed has been deliberately structured so that it can be used as a tool by crisis planners and decision-makers. To this end, it is embodied in an executive aid for crisis decision-makers (CACI, 1979 report). This aid is a highly user- oriented database management system that allows planners to focus upon their own specific concerns. Moreover, the system is designed so that users can adapt it to incorporate additional outcomes data (developed from either open or classified sources) for use in their analyses. While a deliberate attempt has been made in the development of the database and its analysis to avoid drawing normative judgments concerning the ‘correctness’ of either U.S. or Soviet goals, the existence of the outcomes data provides a diagnostic base for evaluation of various goals’ achievement and thereby helps in the process of selecting and evaluating crisis action options.

Civil Defense in Metropolitan America. Organization of Zonal Civil Defense Systems for Large Populated Areas, January 1972 [126 Pages, 5.3mb] – The Institute of Public Administration since 1967 has been studying the organization of civil defense (that is, its nuclear threat components) in large population centers drawing on its background in administration, urban analysis, and metropolitanization. An earlier report submitted in 1969 to the U. S. Office of Civil Defense outlined several themes for making civil defense building and operating systems relevant to the requirements of the major metropolitan areas. IPA then was asked to continue its analysis, with particular reference to a zonal (or large area) concept of civil defense. The report helps define a potential organizational strategy for the zonal concept. The report is not a definitive design for implementing the zonal concept; rather, it probes the issue, describes and analyzes the universe within which a zonal system of civil defense inescapably would evolve, and applies a case study methodology– which is more an exercise in exposition than in organizational engineering.

Civil Defense Systems: Social Impact and Management Planning, April 1972 [197 Pages, 9.9mb] – The bibliography — one in a series on Civil Defense Systems — contains a compilation of references on Social Impact and Management Planning. References contained in this volume pertain to psychological factors related to recovery from nuclear attack; public response to community shelter planning; fallout shelter management responsibilities; emergency operations training; attitudes toward civil defense; requirements for local planning to cover hazards of fallout; food processing and distribution; and the roles of the dentist and pharmacists in national disasters. Other bibliographies in this series are: Preattaack and Postattack (Nuclear Warfare), and Shelters. Corporate Author- Monitoring Agency, Subject, Title, Contract, and Report Number Indexes are included.

A Core Training Program for State Level Civil Defense Program Personnel [230 Pages, 8.9mb] – The purpose of this study was to derive information required improving State level civil defense training and to apply this information to the development of required courses for achieving this purpose. In order to achieve this goal, research was first conducted to determine the training requirements for the governmental and auxiliary personnel that are needed to implement State civil defense operational plans. Second, training materials were developed to meet these requirements.

A Delphi Examination of Civil Defense: 1. Questions, Issues, and Arguments, May 1970 [104 Pages, 13.9MB] – This Memorandum exposes opposing arguments about U.S. civil defense in the broad context of strategic issues, international factors, and domestic considerations. The information has gathered by the Delphi method of eliciting and refining group judgments. The exercise consists of several iterations of questions and responses, with carefully controlled feedback between rounds.

Federal Civil Defense Organization: The Rationale of its Development, Jan 1965 [104 Pages, 5.4mb] – The present study examines the organizational concepts which have emerged during the modern history of civil defense. Since these have derived largely from polityoriented approaches, concepts of the role of civil defense in national security policy and machinery, of Federal, State, and local responsibilities, and of emergency powers are stressed. The issues underlying these polity problems are considered under three main headings: the mission and purpose of civil defense, the operational requirements for fulfilling the life- saving mission, and the policy constraints which limit the range of feasible ways to meet requirements. Cost/effectiveness analyses are suggested for initial comparisons of the alternative organizational systems for satisfying requirements for protective capabilities, emergency services, resource allocation, and communications systems. Broad organizational proposals which have been recommended are examined, and the principal reasons for which they have been rejected are indicated.

Final Report for the Office of Civil Defense Warning System Research Support Vol. I: Radio Warning System Studies, 31 January 1966 [274 Pages, 30.2MB] – The report summarizes the results of the research effort in the area of civil defense warning system and comprises the final report required by the contract.

Final Report for the Office of Civil Defense Warning System Research Support Vol. III: Use of Damage Assessment Information for Warning, 31 January 1966 [67 Pages, 6.64mb] – In April 1964, System Development Corporation (SDC) was awarded a contract (OCD-PS-64-183) by the Office of Civil Defense to continue activities in the area of civil defense warning system research support. The basic contract was modified and amended several times. This volume and two others, TM-L-1960/090/00 and TM-L-1960/091/00, are, together, the final report recognized by the contract. These volumes of the final report represent the results of the research effort.

Integration of Air and Sea Power in Regional Crisis Control, June 1992 [284 Pages, 11.1mb] – Air power and sea power will be the most useful instruments of military force available to planners over the coming decade. Why? Because virtually all conflict during the next ten years will be regional in character. In the context of regional crisis, control of the vertical ladder of escalation will be the concern of the political leadership and, therefore, the most critical task facing the military commander and planners. Our strategists must develop a coherent and usable concept for the integrated use of air and sea power, involving U.S. Navy, Marine Corps, and Air Force assets. The powerful synergism that can be achieved by truly integrating `air and sea power has yet to be realized, although we learned much about it in the Persian Gulf war. U.S. warfighters and strategists must assess and improve all aspects of military performance in this critical area — integration of air and sea power in regional crisis control — in order to face effectively the geostrategic environment over the next decade.

Organizing Minicipal Governments for Civil Defense, October 1963 [ 307 Pages, 18.3MB ] – The study describes the civil defense responsibilities of municipal government as defined by present federal programs and policies, especially as they relate to the fallout shelter program. Six cities are then analyzed to determine the manner in which community resources have been organized to meet these responsibilities. The cities were selected to represent the several common forms of city government and to provide a wide geographic distribution and spectrum of population sizes from the very small city to the large metropolitan city. Each case study provides a profile of the city to establish its essential characteristics and identify any exceptional circumstances that may be peculiar to the city and affect its civil defense capabilities. The preparations made by the city for government operations in the event of nuclear or natural disaster are investigated, including continuity of government, emergency powers, and the civil defense agency, its financing, program, and facilities for emergency operations. The emergency operations or survival plans of each city are related to the assignment of its regular departments and agencies to emergency disaster functions. The utilization made of volunteers and non-governmental agencies, organizations, and institutions to augment and supplement city forces is described.

The Role of Civil Defense and the Scope of Its Mission in U. S. National Security Strategy, April 1992 [ 35 Pages, 1.5MB ] – In our constantly changing world, and especially with the breakup of the Soviet Union, it seems timely to review the current status of the United States civil defense program with a primary focus being the future configuration of the program. Our current civil defense program evolved during a time when nuclear confrontation between the U.S. and the Soviet Union was the primary threat to national security. This threat is now greatly diminished, but our civil. defense program continues to emphasize attack-related emergencies with secondary emphasis on disaster-related emergencies. The National Security Strategy of -the United States published by The White House in August, 1991 states that, Our civil defense program is still needed to deal with the consequences of an attack, while also providing capabilities to respond to natural and man-made catastrophes. One might question whether we still need a civil defense program to deal with the consequences of attack. After all, who has the capability and will to attack the U.S.? On the other hand, natural and man-made catastrophes continue to affect our country. While these catastrophes may wreak havoc on a local area, it could be argued that they most likely would not directly impact our national security. Therefore, we must determine whether our civil defense program should continue to emphasize the consequences of an attack, or whether it is more appropriate to shift its emphasis to natural and man-made catastrophes.