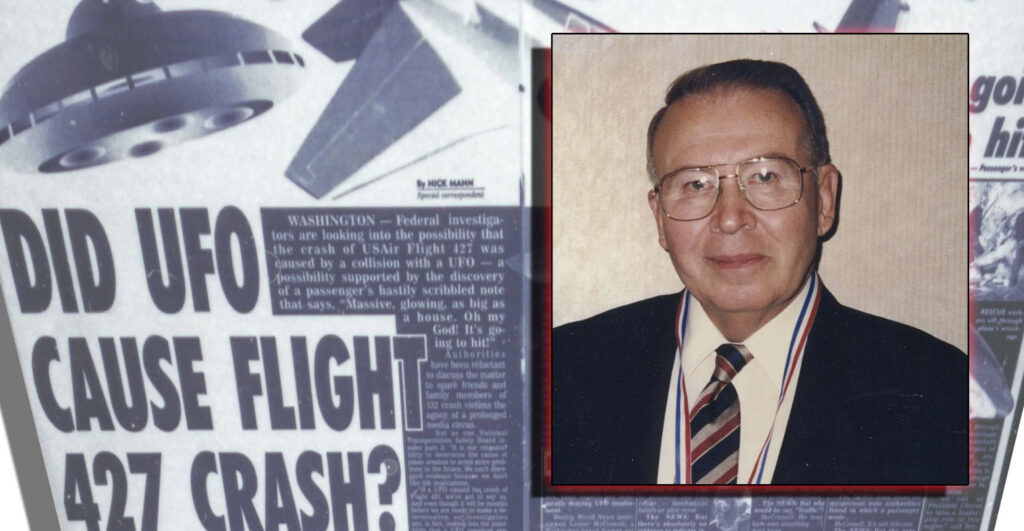 His name was Charles J. Stahl. He had a long and successful career, which included being the Chairman of the Department of Laboratory Medicine at the Naval Medical Center in Bethesda, Maryland; Chief of Laboratory Service for the Tennessee V.A.; Assistant Chief Medical Examiner for the State of Tennessee; Chief of Staff at the VA hospital at Wright State University; Deputy Medical Inspector for the Naval Medical Research Institute; then he would ultimately serve as the Chief Armed Forces Medical Examiner where he remained until he retired in 1996. His personal files reside at the National Museum of Health and Medicine, and in between boxes of material which includes legal case files, certificates, awards, office files, and pathology reports – is something you might not expect. One single entry in Box 008, sub box 00001, is something simply titled “UFO Article.”

On September 6, 2019, a Freedom of Information Act (FOIA) request was filed with the Defense Health Agency (DHA) to try and track down the record. The DHA is the office responsible for overseeing the records contained within the Charles J. Stahl Collection at the National Museum of Health and Medicine.

On February 18th, 2020, the DHA released the article within the collection, as requested. This was it:

The question arises why is it there? In a collection full of what you likely see within the files of someone holding the job titles they did, there was only one single article relating to UFOs, and from the Weekly World News, no less.

The article was a typical tabloid UFO story. It alleged that Flight 427, which crashed on September 8, 1994, killing 132 people, was brought down by a collision with a UFO. In the write-up, an unnamed National Transportation Safety Board (NTSB) investigator stated it was potentially a collision with an unknown vehicle in the sky that brought the plane down. This was supported by a mysterious note that was found at the crash site. Charred and burned, the note was still legible. It read, “Massive, glowing… as big as a house. Oh my God! It’s going to hit!”

UFO researcher by the name of Phil Brunei was then brought into the story who supported the theory. He called on President Bill Clinton to get involved in the investigation and deal with what could be “starship traffic.”

“We call on President Clinton to take a leadership role in this matter,” Brunei told the Weekly World News. “If a starship or UFO had something to do with the crash, it is incumbent upon him to formulate a national policy to deal with starship traffic in U.S. air space.”

So what in the world out of this article, prompted the Chief Armed Forces Medical Examiner to save it in his collection of papers? The answer to that, may never be known. Stahl passed away on March 1, 2016, and he took with him whatever it was about this article, that prompted him to save it.

This story is reminiscent to the discovery of a National Enquirer UFO article within the holdings of the National Security Agency (NSA). “Govt.’s Super-Secret Security Agency Warns: Take UFOs Seriously or Be Prepared for Sneak Invasion by Space Aliens” by Thomas L. Muldoon was oddly found within the secret spy agency’s holdings. However, the article itself was about the NSA, therefore, it made sense that they may hold on to it or an NSA employee decided to clip it and keep it on their desk.

This Weekly World News article found within the Stahl collection? A tabloid often filled with fake news and doctored photos? Shows no connection to anything that he would be interested in, other than, possibly the incident itself.

The reasoning for the existence of the file is pure speculation, but the fact remains, he felt a need to save it.

As the topic of Unidentified Aerial Phenomena (UAP) (the hip new 21st century way to refer to UFOs) continues to make headlines, there is no denying that whatever UFOs really are, they could present a danger in the skies to our normal air traffic. The final question may simply just be, did the Chief Armed Forces Medical Examiner at the time know this fact 26 years before it would finally become a serious topic of debate?

Or, maybe it was just a joke.

** Special thanks to The Black Vault visitor “Prof. Heinous” for submitting the Stahl Collection as a lead!

The above is the original scan as released via FOIA. But, for some, it may be hard to read. So, I tracked down a better scan of the Weekly World News article, which can be viewed below. 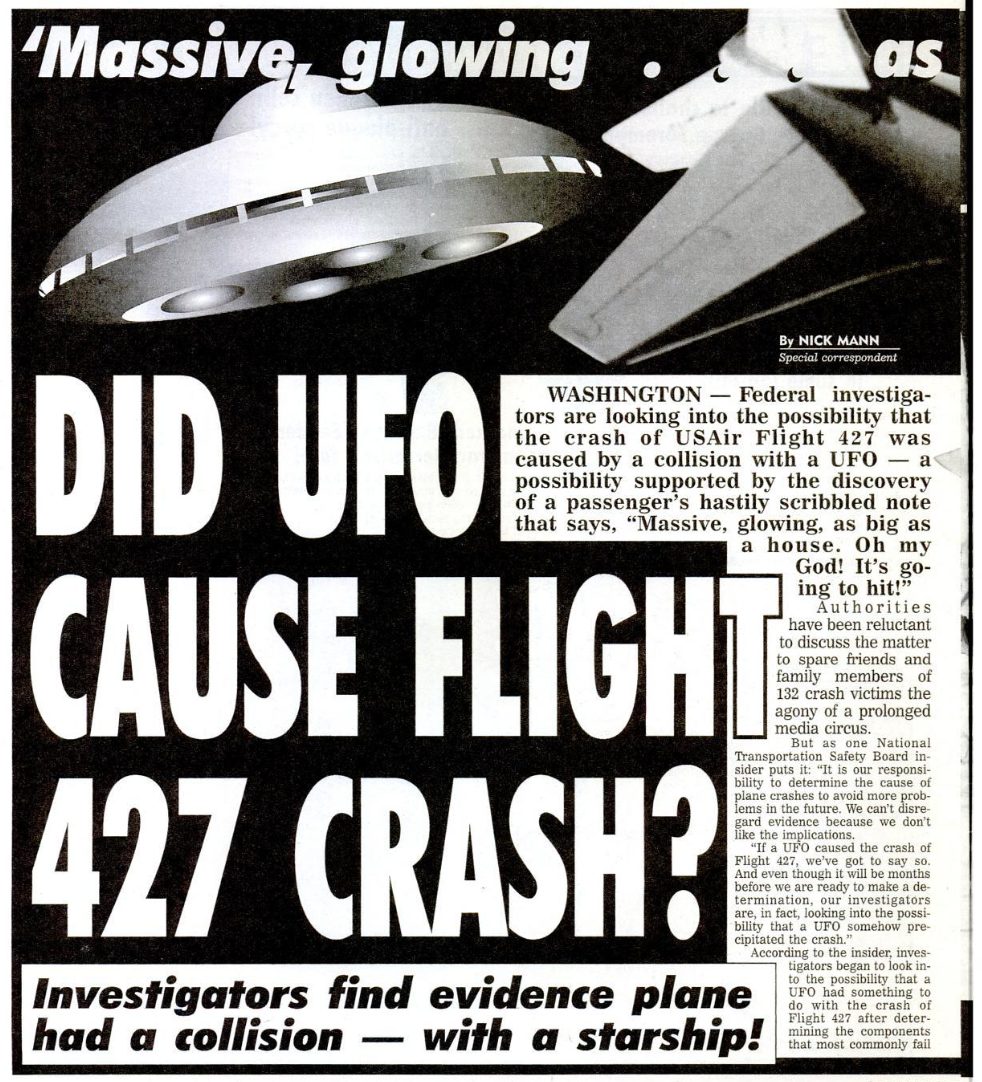 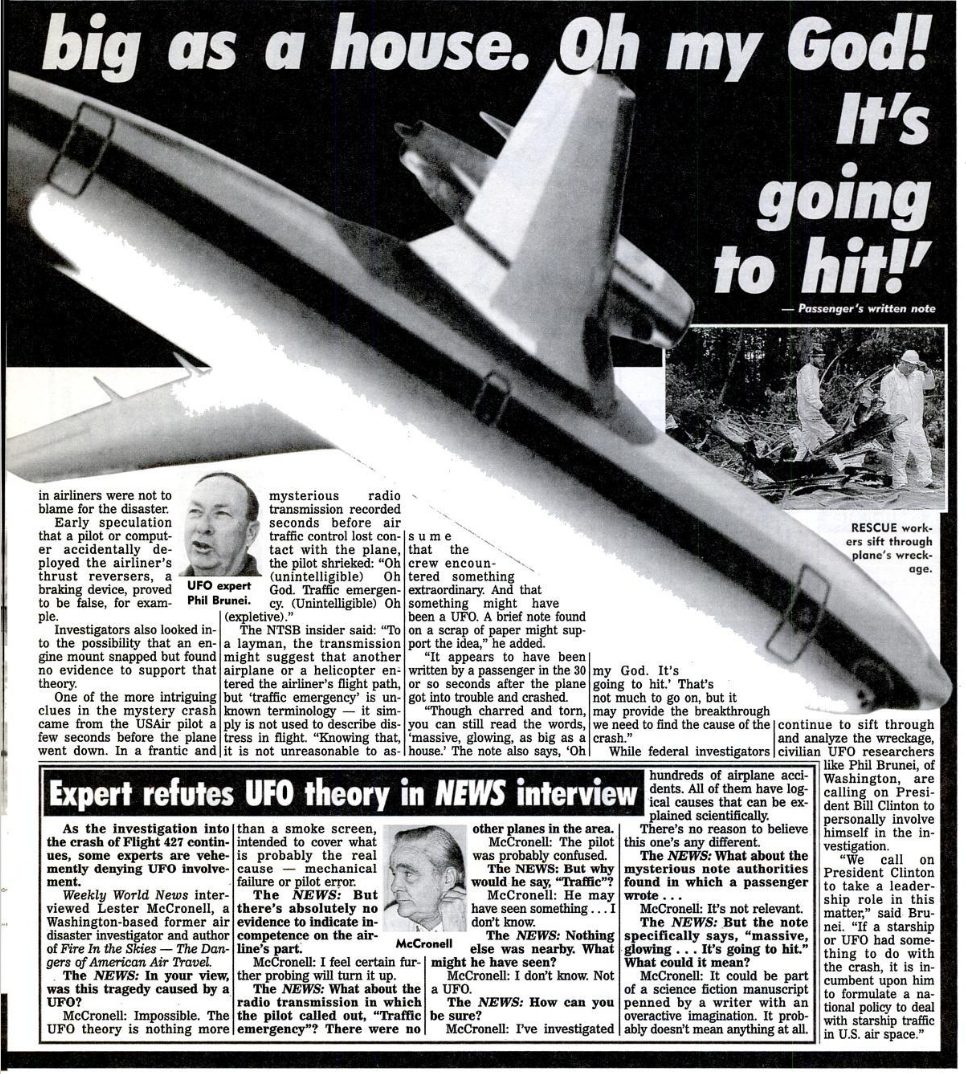