According to Mr. Frank Kimbler’s biography:

“Frank Kimbler is an Assistant Professor of the Earth Science at the New Mexico Military Institute (NMMI) and he has worked as a professional geologist for almost 30 years. He has worked as an oceanographer for the National Oceanic and Atmospheric Administration (NOAA) and as a mining engineer for the State of Arizona. He moved to New Mexico in 2009 after accepting a teaching position at NMMI in Roswell. Shortly after moving to Roswell he took a keen interest in the story behind the Roswell UFO incident. His research has resulted in the discovery of a number of physical artifacts from the Roswell UFO debris field area. His research has also been featured on several National Geographic TV programs, the History Channel, and numerous Internet talk shows about UFOs. He is dedicated to discovering answers and using good science to prove that we are not alone in the universe.”

In June of 2018, the BLM reached out to Mr. Kimbler about his finds in relation to alleged metal pieces he discovered connecting to the Roswell craft.  He posted on Facebook, seeking help, as the BLM required him to not only come to their offices; but bring the metal pieces with him. This post piqued my interest, so I reached out to Mr. Kimbler, and asked if he’d like to come on to The Black Vault Radio to talk about his story, and get more awareness. The situation seemed bizarre, and definitely warranted attention.

He agreed to come on to the program, and the episode was first broadcast on this site on July 6, 2018. You can listen to it here:

A few months later, I requested under the Freedom of Information Act (FOIA), all records pertaining to the contact of Mr. Kimbler, and records relating to the subsequent investigations. Although a response letter was sent dated March 17, 2019, the CD-ROM sent was a completely different set of documents, which I can only assume were meant for a different requester on a wildly different topic. It was not until May 9, 2019, that I finally received the documents via electronic transfer. I took the liberty of blacking out a few phone numbers, that I felt should not be released, and I believe that may have been an accident.

The release revealed that not only did the BLM contact Mr. Kimbler, and ask for him to come to their office with the metal fragments as we already knew, it also showed that they watched his social network posts closely.  In addition, they kept track of most of the replies, in the form of comments, from his followers and supporters. Screen shots were taken by BLM staff and logged within the BLM files. They began watching Mr. Kimbler’s posts within one day of the original please for the public’s help (indicated by the time stamp in this screen shot): 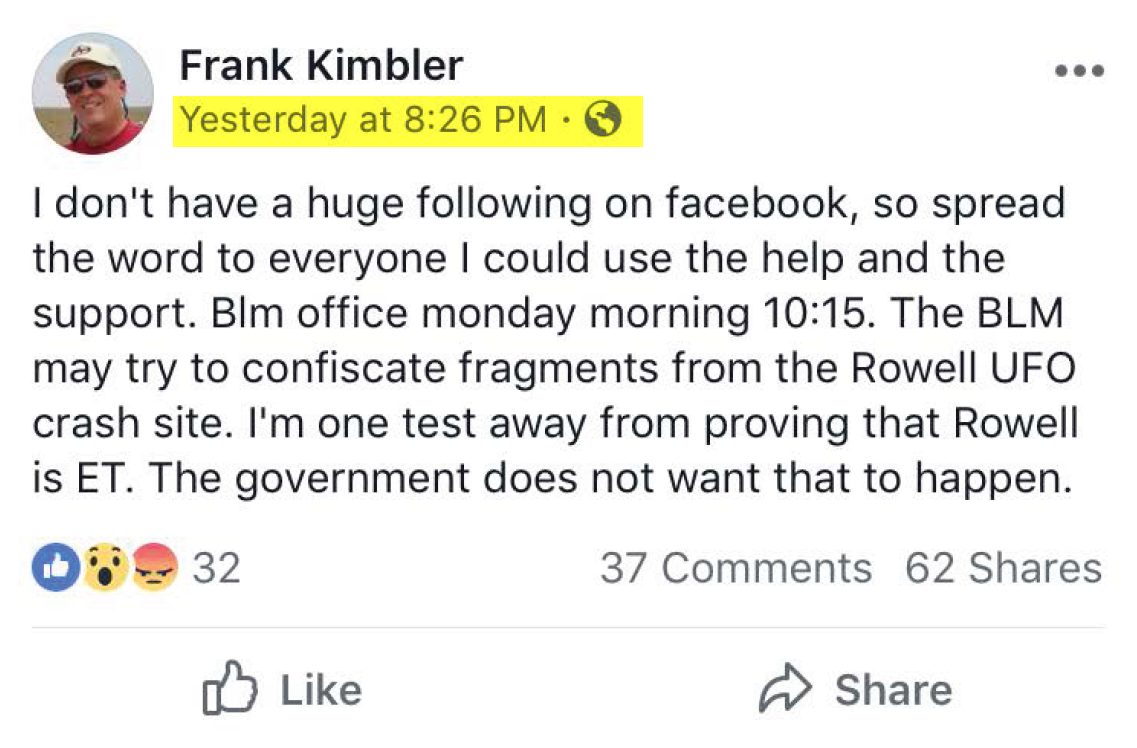 In addition to the above, they watched Mr. Kimbler’s subsequent posts/followups after the one above, and had screen shots taken within hours of those.

The remaining documents show that the BLM took extensive notes on the meeting that Mr. Kimbler had with BLM personnel, and they took notes on all calls made with Mr. Kimbler, and also Mr. Donald Schmitt.

The documents are combined below, in a single .pdf for easier reading. The .pdf file contains “bookmarks” once opened, which indicate the various files that were released. As noted, I redacted a few phone numbers which should not have been made public. The rest, is how I received it.