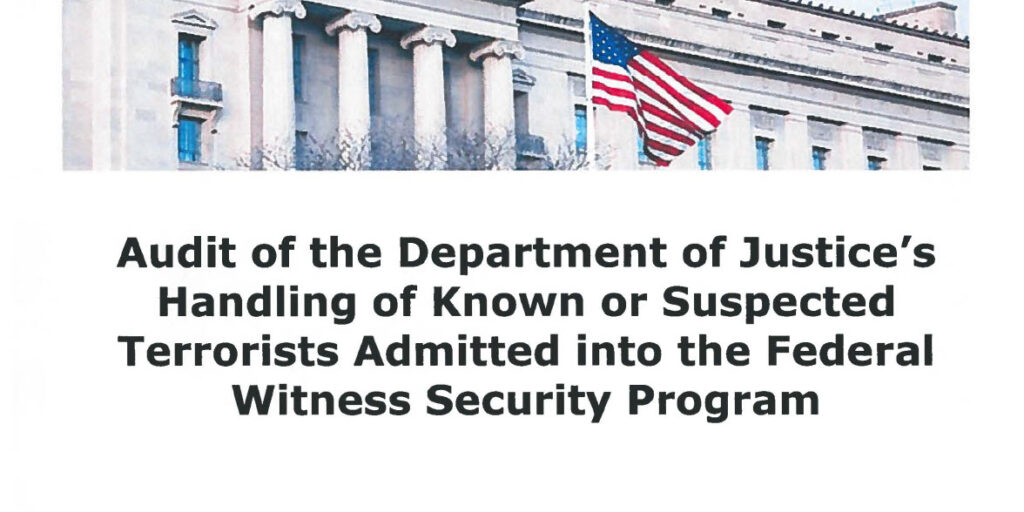 Audit of the Department of Justice’s Handling of Known or Suspected Terrorists Admitted into the Federal Witness Security Program Audit, September 2017

The federal Witness Security Program (WITSEC Program) was established to provide for the security, health, and safety of government witnesses whose lives are at risk as a result of their testimony against organized crime members, drug traffickers, terrorists, and other major criminals. 1 Since the WITSEC Program’s inception in 1971, more than 8,700 witnesses and over 9,900 family members and other associates of witnesses have been admitted into the WITSEC Program.
Within this population, there are known or suspected terrorists (KSTs) who have agreed to cooperate in major terrorism investigations and prosecutions, including the 1993 World Trade Center bombing, the 1995 Alfred P. Murrah Federal Building attack in Oklahoma City, the 1998 East Africa Embassy bombings, a 2007 plot to bomb John F. Kennedy Airport, and a 2009 plot to bomb the New York City subway system.

In this report, we follow up on findings in our May 2013 report to determine whether the corrective actions taken by the FBI, USMS, and OEO sufficiently addressed the risks we identified. Specifically, our objectives for this audit were to evaluate the Department’s: (1) handling of KSTs admitted to the WITSEC Program; (2) practices for watchlisting and the processing of encounters with this group of WITSEC Program participants; and (3) procedures for mitigating
risks to the public through restrictions placed on this high-risk group of WITSEC Program participants. We determined that since November 2015, OEO and the FBI admitted two new KSTs into the WITSEC Program, and in doing so followed their protocols and appropriately coordinated with each other and the USMS. However, we also concluded that while the FBI, USMS, and OEO have developed new policies and procedures to address the issues we identified in our May 2013 review, they have not sufficiently and appropriately implemented all of them. Additionally, we remain concerned that the Department has not ensured that KST information has been appropriately shared with relevant national security stakeholders, and that those responsible for monitoring these individuals have the information they need to do so effectively.

Audit of the Department of Justice’s Handling of Known or Suspected Terrorists Admitted into the Federal Witness Security Program Audit, September 2017 [67 Pages, 27.1MB]