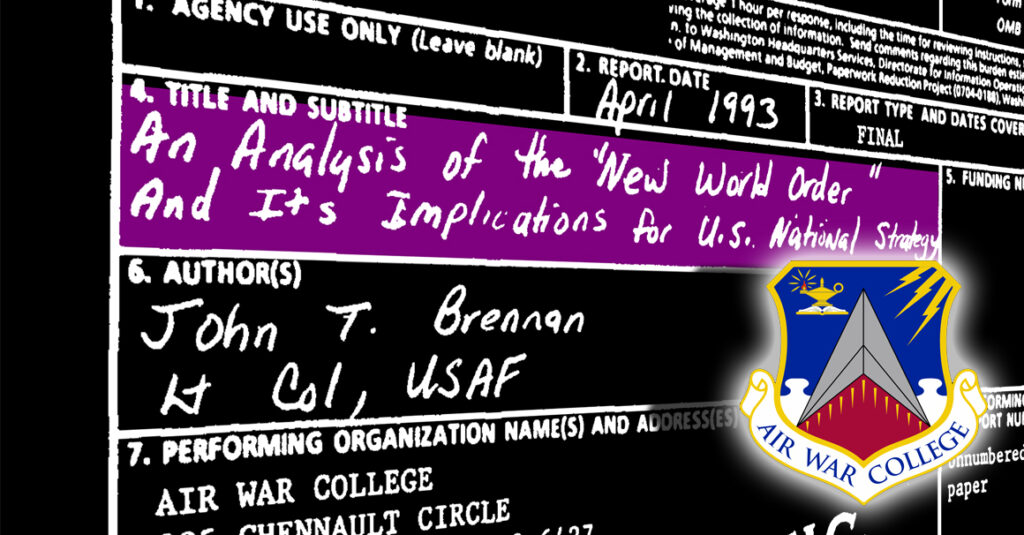 An Analysis Of The “New World Order” And Its Implications For U.S. National Strategy by John T. Brennan, April 1993

According to the paper:

The Cold War is over and the result is a transition from a bipolar world of US vs. USSR to a multipolar world or “New World Order” where the US remains the only military superpower. However, this status is tentative for the United States. Like all the great superpowers in history, the US is about to let the weight of its military establishment, drag its economy into collapse.

This paper looks at the implications of President Bush’s “new world order,” and the opportunities it presents the US to preserve a peaceful international environment with an open international market system while at the same time retaining its superpower status. The paper establishes that the “new world order” is more than just rhetoric or simple statement of fact, it exists but is ill-defined. As a result, the paper proposes to define the term as a democratic world where all nations join together in partnership and cooperation under the framework of the United Nations to establish peace, prosperity, and justice for all.

Note: This is John T. Brennan, not to be confused with the more well known John O. Brennan, former Director of the Central Intelligence Agency.

An Analysis of the ‘New World Order’ and Its Implications for U. S. National Strategy [40 Pages, 1.91MB]