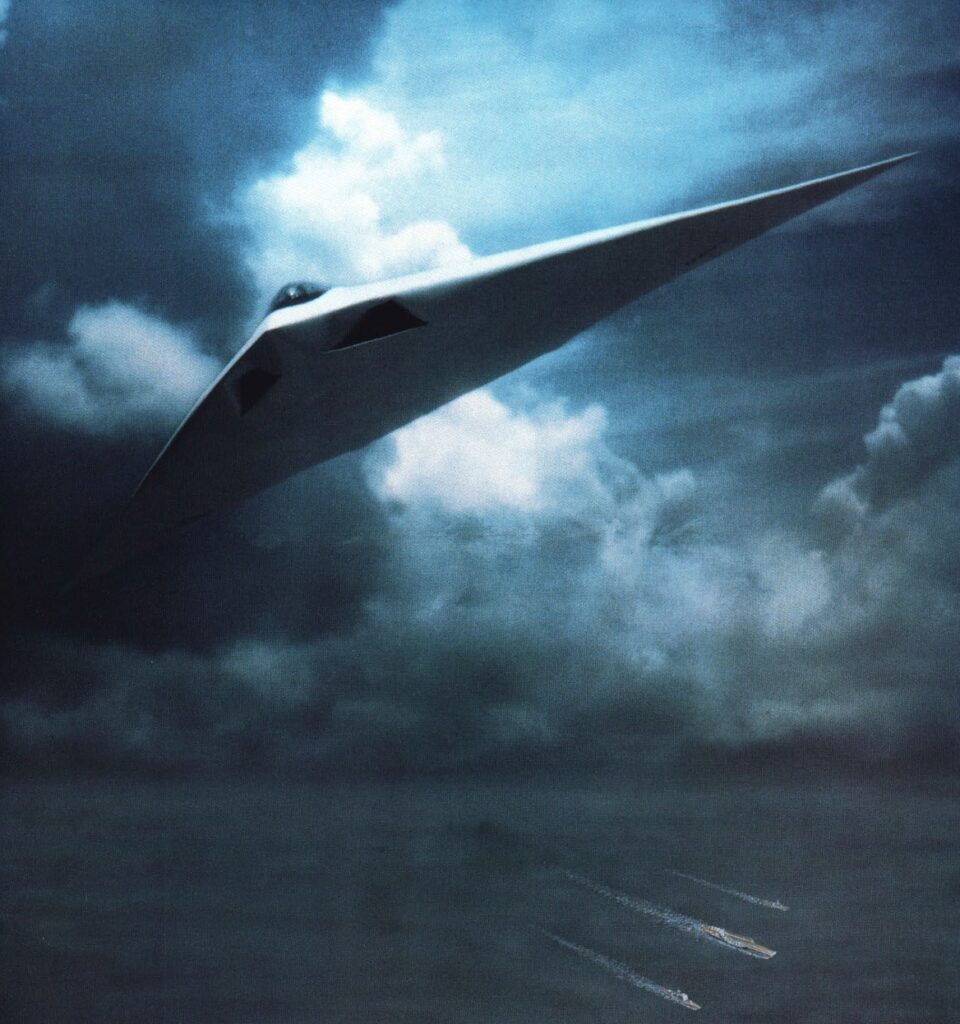 The A-12 Avenger II was an American aircraft program from McDonnell Douglas and General Dynamics intended to be an all-weather, carrier-based stealth bomber replacement for the A-6 Intruder in the United States Navy and Marines. The A-12 project was canceled in 1991 due to high costs.

Artists’ conceptions and mockups of the craft revealed a flying wing design in the shape of an isosceles triangle, with the cockpit situated near the apex of the triangle. The aircraft was designed to have two General Electric F412-GE-D5F2 turbofans, each producing about 13,000 lbf (58 kN) thrust, and was equipped to carry up to two AIM-120 AMRAAM missiles, two AGM-88 HARMs and a full complement of air-to-ground ordnance, including Mk 82 bombs, or smart bombs, in an internal weapons bay. The A-12 gained the nickname “Flying Dorito”.

The aircraft suffered numerous problems throughout its development, especially with the materials, and when the projected cost of each aircraft ballooned to an estimated US$165 million, the project was canceled by then-Secretary of Defense, Dick Cheney, in January 1991.

Below are the documents obtained regarding the A-12 Avenger II.

Events Surrounding the Navy’s A-12 Aircraft Program [13 Pages, 600k] – Appendix I provides a list of significant events affecting the Navy’s A-12 program, including the Secretary of Defense’s Major Aircraft Review in December 1989. After the Secretary’s April 1990 testimony on the results of the review, the A-12 contractors disclosed that the date of the A-12’s first flight would slip significantly and that the cost of full-scale development would overrun the contract ceiling by an amount that the contractors could not absorb. The chronology extends through June 1991, when the A-12 contractors filed a lawsuit in U.S. Claims Court, asking, among other things, for a judgment that the A-12 contract was terminated for the convenience of the government. According to the Navy, if the court rules that the termination was for the convenience of the government, rather that a default for nonperformance, the contractors may not be required to return the 1.35 billion in progress payments. The lawsuit is still pending. Appendix II lists the payments made to McDonnell Douglas for work on the A-12 full-scale development contract. These payments totaled 1.4 billion and were made monthly from contract award to contract termination. General Dynamics was paid about 1.3 billion for its work on the A-12 full-scale development contract. Appendix II also shows the 25.6 million in additional payments made to McDonnell Douglas for A-12 related work under a separate basic ordering agreement. These payments were made from contract award to February 1992.

Review of the A-12 Aircraft Program [54 Pages, 2mb] – In 1984, the Deputy Secretary of Defense directed the Navy to develop and acquire the A-12 aircraft as a replacement for the Navy A-6 Intruder aircraft, the primary all-weather medium-attack aircraft. The Deputy also directed that the A-12 aircraft achieve initial operational capability not later than 1994. The Air Force had planned to procure a variant of the A-12 aircraft to replace the F-111 aircraft. The original Air Force plan called for initial delivery to occur in FY 1995. In November 1984, two contractor teams (McDonnell Douglas Corporation (MDC)/General Dynamics Corporation (GD) and Northrop/Grumman/ Vought) were awarded contracts for concept formulation. Both teams continued into demonstration validation under contracts awarded in June 1986. The two teams competed for the full-scale development (FSD) contract, which was awarded to the contractor team of McDonnell Aircraft Company, McDonnell Douglas Corporation (McAir) and General Dynamics Corporation, Fort Worth Division (CDFW) on January 13, 1988. From the very beginning, the A-12 aircraft program was a special access program meaning that all program-related documents and information were subject to vigorous security controls.