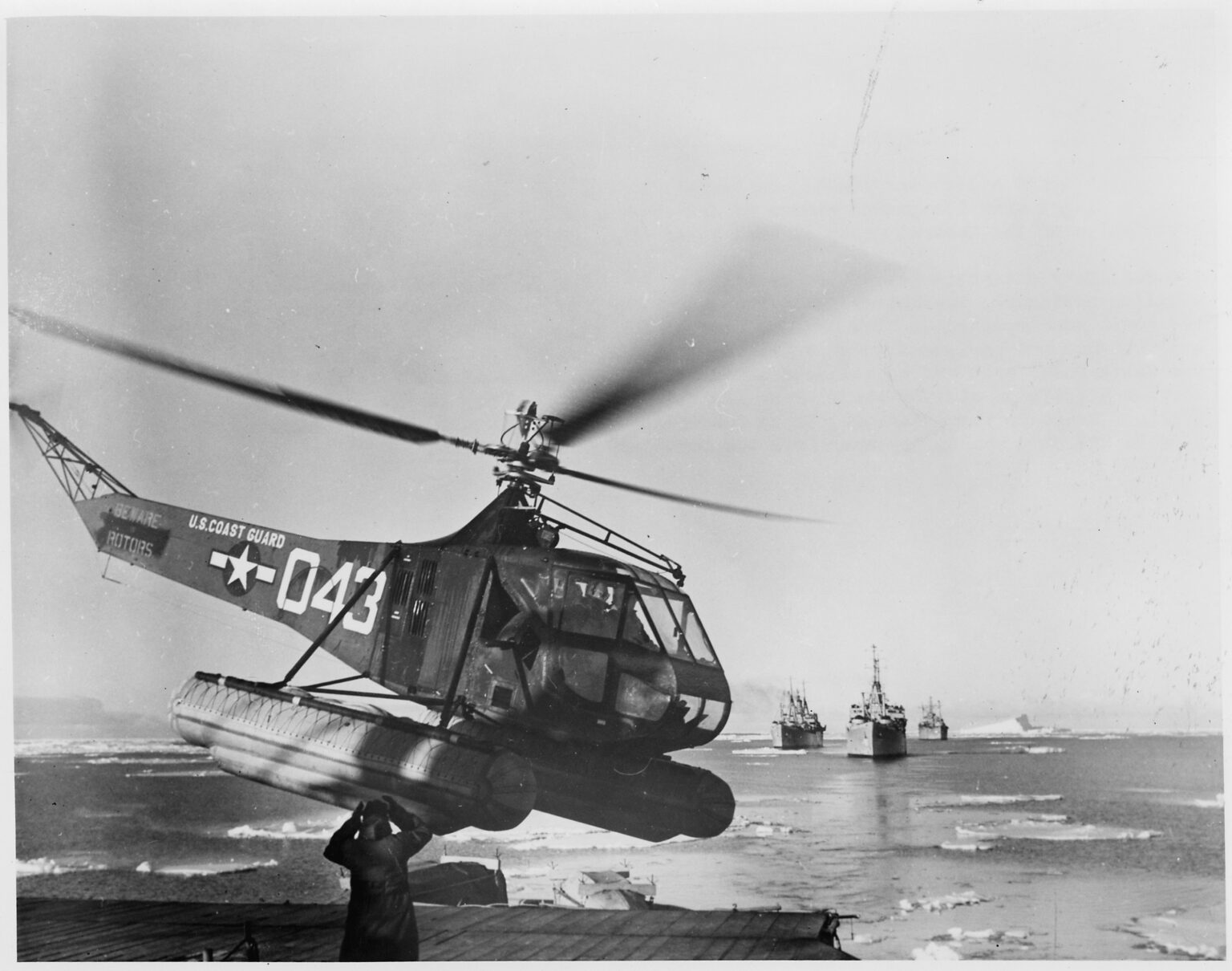 The following are documents related to, or mentioning, Operation Highjump:

COMPACTED-SNOW RUNWAYS IN ANTARCTICA, DEEP FREEZE 61-64 TRIALS, Feb 1966 [51 Pages, 13.70 MB] – In Deep Freeze 61, NCEL provided technical guidance to a Navy snow- compaction team investigating the practicability of building roads on snow- covered sea ice over McMurdo Sound and runways on the deep snow cover of the Ross Ice Shelf adjacent to McMurdo Station. These investigations and trials continued through Deep Freeze 64. This work was directed toward the development of a layered, compacted-snow runway on deep snow which would support aircraft weighing up to 155,000 pounds with tires on the main wheels inflated to 135 psi; it was only partially successful. During the trials, there were intermittent areas of compacted snow capable of supporting aircraft weighing up to 100,000 pounds with main tires inflated to 90 psi, but low-strength areas prevented takeoffs and landings with aircraft weighing over 25,000 pounds with main tires inflated to 60 psi. New processing and elevating equipment introduced in the Deep Freeze 64 trials showed considerable promise of producing dense, uniform, high -strength, elevated areas of compacted snow. It was concluded that the trials should continue in Deep Freeze 65 to explore the capabilities of this equipment.

Notes on Antarctic Aviation, Aug 1993 [156 Pages, 8.92 MB] – Antarctic aviation has been evolving for the best part of a century, with regular air operations developing over the past three or four decades. Antarctica is the last continent where aviation still depends almost entirely on expeditionary airfields and ‘bush flying,’ but change seems imminent. This report describes the history of aviation in Antarctica, the types and characteristics of existing and proposed airfield facilities, and the characteristics of aircraft suitable for Antarctic use. It now seems possible for Antarctic aviation to become an extension of mainstream international aviation. The basic requirement is a well-distributed network of hard-surface airfields that can be used safely by conventional aircraft, together with good international collaboration. The technical capabilities already exist.

Observations of Radar Propagation and Influencing Meteorological Factors during the 1946-47 Antarctic Expedition, 10 June 1947 [18 Pages, 1.42 MB] – Admiral Byrd’s antarctic expedition of 1946-47 offered an excellent opportunity to study radar wave propagation and low-level meteorological conditions which exist about the Antarctic Continent. Although a great deal has been reported concerning the general meteorology of the antarctic, the conditions which affect the ranges of radar have never been stressed due to the relatively recent development of radar and use of the radio frequencies concerned. This report deals with the radar and meteorological measurements that were made during the cruise of the Western Task Group of Operation HIGHJUMP. Most of the measurements reported were made aboard the seaplane tender USS CURRITUCK. This tender made available the convenient use of PBM and helicopter aircraft. The antarctic portion of the cruise was made during the antarctic summer months, between 22 December 1946 and 4 March 1947. The ship kept a close proximity at all times to the continental ice pack which extends about 50 to 150 miles from the continent in most regions. The area covered lay between 180 degrees east longitude and 34 degrees east longitude during the above-mentioned period.

The Polar Submarine and Navigation of the Arctic Ocean, 21 May 1959 [91 Pages, 4.94 MB] – This is a reissue of the original report without any changes (except for the inclusion of an addendum written in May 1950). The report evaluates observations made on polar voyages up to and including 1948, and discusses the equipment and modifications needed to make a Fleet-type submarine suitable for under-ice research.Th

Protecting United States Interests in Antarctica, April 1988 [124 Pages, 4.94 MB] – This thesis begins by presenting a geographic overview of the physical features and resources in Antarctica and the Southern Ocean. Next, it details the history of claims and interests over Antarctic territory, with particular emphasis on United States activities. Aspects of the U.S.-initiated Antarctic Treaty regime are then explored, including management of living resources and potential exploration and exploitation of nonliving hydrocarbon and mineral resources. The thesis points out past weaknesses in U.S.-Antarctic policy making, and recommends a broader role for the Department of Defense in such areas as safety and security. The thesis also recommends that the Antarctic Treaty consultative parties resolve the issue of criminal jurisdiction over offenses committed in Antarctica before the theoretical problem arises in practice, suggesting a model fashioned somewhat after the North Atlantic Treaty Organization’s Status of Forces Agreement. Finally, the thesis highlights the recent influence of the United Nations over Antarctic affairs, and proposes that the governing Antarctic Treaty consultative parties should cooperate more with the United Nations to avoid confrontation over the impending minerals regime. Suspension of South Africa from consultative status is recommended as a means of dampening United Nations’ opposition to the minerals regime, and of preventing eventual dissolution of the regime over these and other issues.

SNOW-COMPACTION EQUIPMENT–VIBRATORY FINISHERS [34 Pages, 1.24 MB] – To investigate the feasibility of surface-hardening compacted snow by vibrationand, if feasible, to develop vibratory finishers for this work.