The Pentagon has recently opened up to The Black Vault about the rumored “secret UFO Program,” known as the Advanced Aerospace Threat Identification Program or AATIP.

On December 16, 2017, news of this obscure program was first announced by the NY Times and Politico. Both media outlets reported that UFOs-  now being referred to as “Unidentified Aerial Phenomena” or UAPs to reduce the stigma surrounding the topic – were the direct focus of this program. However, the Pentagon now seems to have changed their stance.

Claiming they want to correct the record and clear up some inaccuracies, the Pentagon now says AATIP was not a UFO or UAP program. 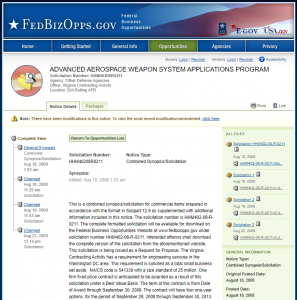 “Neither AATIP nor AAWSAP were UAP related,” said Pentagon spokesperson Susan Gough in an e-mail to The Black Vault. “The purpose of AATIP was to investigate foreign advanced aerospace weapons system applications with future technology projections over the next 40 years, and to create a center of expertise on advanced aerospace technologies.”

Since 2017, details have been scarce. However, the DoD’s latest position that AATIP wasn’t a UFO program, seems to represent one of their most dramatic about-faces on the issue since the program was first revealed.

The “AAWSAP” Gough refers to is the Advanced Aerospace Weapon System Applications Program; a contract posted publicly by the Defense Intelligence Agency (DIA) asking for bids from the private sector on August 18, 2008.  By the due date of September 5, only one bidder had submitted a proposal, and that was Bigelow Aerospace’s subsidiary known as Bigelow Aerospace Advanced Space Studies or BAASS. They were awarded the contract, and according to the NY Times, operated with a $22 million budget. (Note: The Black Vault has not been able to independently verify that budget amount.)

Many researchers, bloggers and journalists within the mainstream media have often confused AATIP and AAWSAP along with the missions of both programs. For example, an anonymous letter by someone claiming to be involved in the project was published by KLAS-TV, and it alleged AAWSAP was studying poltergeists along with other paranormal activity.  Another example is a blogger attempting to create a cohesive timeline of the programs, but often confuses dates, facts and figures that have already been established and documented. According to the latest from The Pentagon, none of that is the case as, “[AATIP] was the name of the overall program. [AAWSAP] was the name of the contract that DIA awarded for the production of technical reports under AATIP.”

The titles of those “technical reports” referenced by the Pentagon were released via the Freedom of Information Act (FOIA) to The Black Vault on January 16, 2019; which consisted of a list of thirty-eight documents created under the AATIP program. Mysteriously absent from the topics covered by the Defense Intelligence Reference Documents (DIRDs) was anything directly referencing UFOs or UAPs.

Topics did include some wildly speculative science, ranging from warp drives to invisibility cloaking. However, there was nothing about unidentified objects flying in the sky or captured on video. Some researchers have theorized this list of research topics was simply an exploration on how UFOs may work or how an alien civilization might traverse the cosmos in order to visit Earth. Conversely, some have remained skeptical, and felt this list may be proof that AATIP (and/or AAWSAP) had nothing to do with UFOs, and only focused on pseudoscience.

The skeptics appeared to be proven wrong, when on May 22, 2019, the NY Post ran the headline, “The Pentagon finally admits it investigates UFOs.” At the time this article was published, investigative journalist Steven Greenstreet with the NY Post had received word from the Pentagon through spokesperson Christopher Sherwood that AATIP, “…did pursue research and investigation into unidentified aerial phenomena.”

Understandably, the story then went viral.

However, roughly seven months later, the Pentagon’s stance seems to have changed. Although the statement that was given to the NY Post was accurately reported; the Pentagon now states it was not entirely fact-based.

When asked about the discrepancy, “At the time, Mr. Sherwood was repeating the information that had been provided by a previous spokesperson some two years earlier,” said Gough. “That previous spokesperson is no longer with my organization, and I cannot comment on why that person’s explanation of AATIP included that it had looked at anomalous events.  According to all the official information I have now, when implemented, AATIP did not pursue research and investigation into unidentified aerial phenomena; that was not part of the technical studies nor the reports produced by the program.”

The Black Vault reached out to Greenstreet and the New York Post but they did not respond for comment.

Luis Elizondo, Director of Government Programs and Services, To The Stars Academy of Arts & Science.

The Pentagon’s new stance conflicts with former Department of Defense (DOD) employee,  Luis Elizondo. According to Elizondo he was the director of AATIP, and since coming forward in October of 2017, he’s consistantly maintained AATIP did research UFOs / UAPs.  “AATIP itself spent its entire time on UFOs,” said Elizondo in March of 2019 at the first annual Anomalous Aerospace Phenomena (AAP) conference put on by the Scientific Coalition for UAP Studies (SCU). “AATIP was a 100% UFO program, period. It was not looking at airplanes.”

In an already confusing saga,the Pentagon continues to deny Elizondo’s role and participation in the AATIP.  According to Gough, Elizondo was, “not the director of the AATIP,” and reiterated he had “no assigned responsibilities” within the program.

Currently, Elizondo serves as the Director of Government Programs and Services for To The Stars Academy of Arts & Science (TTSA), a “public benefit” corporation led by rock star Tom DeLonge, and stars in a History channel series called Unidentified: Inside America’s UFO Investigation.

In the past, Elizondo has addressed the hierarchy of the AATIP and AAWSAP programs. “It would be disingenuous for me to simply say, well, AATIP is really AAWSAP. Well, it evolved from AAWSAP but it is not AAWSAP,” Elizondo said during an annual Mutual UFO Network (MUFON) conference in July of 2018. “And I think the documentation that is beginning to come out into the public forum, people are beginning to realize that,”Elizondo told the crowd of UFO enthusiasts.

Elizondo did not return a request for comment from The Black Vault.

Although the Pentagon’s change to a previous statement may concern and frustrate a segment of the general public excited about recent UFO developments; hope is not entirely lost. The Pentagon maintains, as of the writing of this article, that the U.S. Navy continues to investigate UAPs, and the three videos that have surfaced in the past two years that have garnered worldwide attention, are still considered UAPs. So the Pentagon hasn’t tried to change or close the door on the whole UFO topic, something should still encourage enthusiasts of the UFO subject.