In October of 2017, To The Stars Academy of Arts & Science (TTSA) introduced Mr. Luis Elizondo to the world. He claimed he was the head of a “sensitive aerospace threat identification program” which conducted research on unidentified aerial phenomenon. We know it now as the Advanced Aerospace Threat Identification Program or AATIP.

I immediately filed a FOIA request to the Office of the Assistant Secretary of Defense (OSD) where Mr. Elizondo worked the day of that press conference. Specifically, Mr. Elizondo was working within the Office for the Under Secretary of Defense for Intelligence (USDI). My FOIA request was given FOIA Case number 18-F-0077 seeking records pertaining to what he claimed to have headed. On November 27, 2017, the DOD responded with a “no records” determination when they searched for records on this program. At the time of filing, the AATIP name was not known, and through additional conversations in December of 2017 when the AATIP story broke in the NY TIMES, Politico etc., OSD claimed all records were under the purview of the Defense Intelligence Agency (DIA).

I appealed the “no records” determination to OSD anyway, despite their statements about the DIA, and that was given case number 18-A-0077-A1. In March of 2019, my appeal was GRANTED. (Source)  Within TWO DAYS after I received that granted appeal letter (which took well over a year to grant to me), I received a strange response that only deepens the mystery.

“The National Programs and Policy Support (NPPS) Office for the Under Secretary of Defense for Intelligence (USDI), a component of the Office of the Secretary of Defense (OS D), advised that a search for records responsive to this request was not conducted. The Director, NPPS, stated that Mr. Luis Elizondo was a DOD employee who resigned on/or about October 10, 2017. NPPS has no information regarding Mr. Elizondo’s claim to have been the Director of Programs to investigate Unidentified Aerial Threats for OSD.” (Source)

So, in other words, the Department of Defense continues (as of March 2019) to deny claims by Mr. Elizondo that there is any information at their office that proves there was investigation into “unidentified aerial threats” at OSD. OSD is where Mr. Elizondo worked, and is now confirmed via a FOIA response letter, not just a public affairs office.  If you couple that with the recent statements given to me directly by the DIA, wherein they said in 2010 the AATIP program was transferred out of that agency, presumably to OSD, there still seems to be no “unidentified flying object” aspect to the program.  Real or not — that continued to be the “official” word. 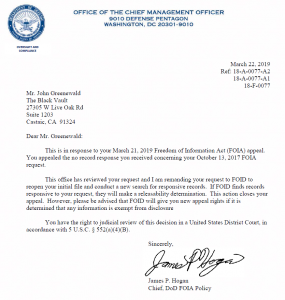 The second appeal to my request — has been officially granted.

Another interesting aspect to this letter, is the fact they did not search for records pertaining to my request. As worded, I did not seek “UFO” related records, but rather, “…all documents pertaining to the outline, mission statement, objectives, etc…”  We have it confirmed that AATIP was transferred there, so therefore, there should be SOMETHING, UFO related or not, that is responsive to my request. So, I immediately appealed the decision, and was granted the appeal quickly. They are now searching again for records, in hopes that SOMETHING will come out about what AATIP really was.

I do not know of any (a/o this post) other AATIP related appeal wins like this at OSD.

Further, my recent discovery of documents on Project OUTGROWTH from the 1970s proves it is not uncommon for programs like AAWSAP / AATIP to exist, that project technology into the future by 40 years, and that deal with propulsion and aerial technology developments.  In fact, Project Outgrowth had a nearly identical mission and objective, of course, with some clear differences. But, it went well into the realms of science fiction fantasy, having dealt with “psychic forces” and “psychokinesis.”  In other words, non-UFO related programs, dealing with paranormal aspects and advanced technology, have existed before.

The concept that AATIP was NOT UFO RELATED is not far-fetched, as history has now proven with undeniable documents obtained via the FOIA.